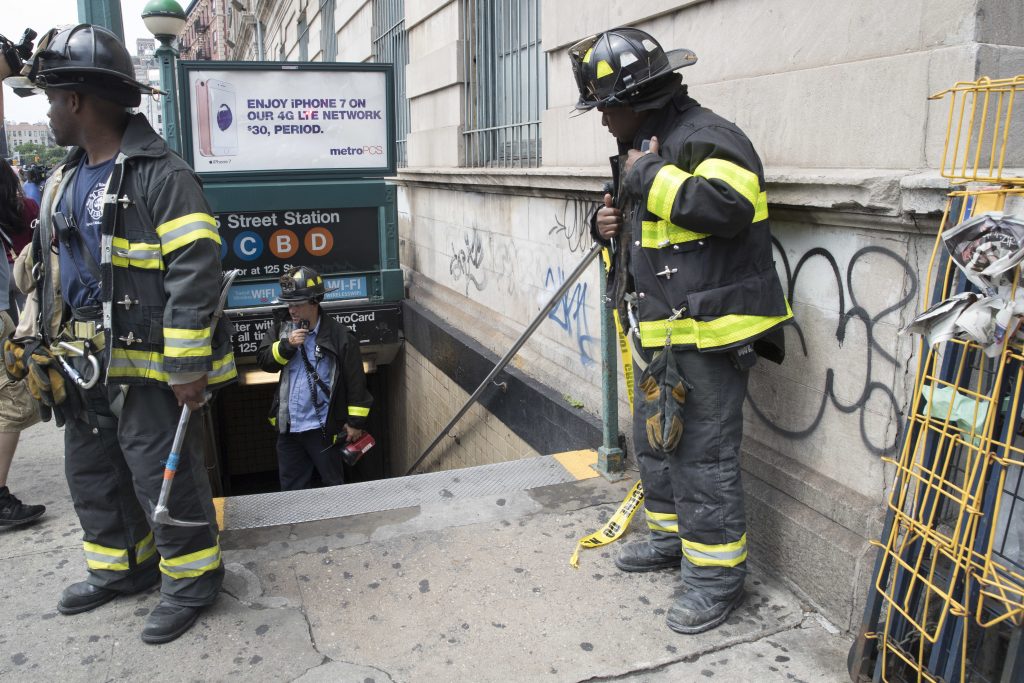 Two cars of a subway train on the A line derailed near the 125th Street station in Harlem on Tuesday and scraped a wall, frightening passengers and resulting in a power outage as people were evacuated from trains along the subway line.

The Fire Department of New York said a handful of people were treated for minor injuries at around 10 a.m. It said there was smoke but no fire. Delays were reported throughout the subway system. Service on the A, B, C and D lines has been suspended until the investigation is completed.

The chairman of New York’s Metropolitan Transportation Authority Joe Lhota later said transit officials are investigating why the train’s emergency brakes went on before the derailment. There were no initial indications of equipment or track failure. He said seven people sustained minor injuries, mostly smoke inhalation.

Passengers interviewed by local TV stations described the train vibrating wildly and bucking as it went off the rails.

“When it first started derailing, there were some screams and shouts,” a passenger, Steve Epstein, told NY1 TV. He said there was white smoke and “there was a lot of banging around in that car — it was really bad.”

“But when it came to a stop and we looked around and everyone was all right, everyone was pretty calm,” Epstein said. “It was quite a ride.”

Other trains approaching the station halted in their tracks. Pictures and video posted on social media showed passengers evacuating through darkened subway tunnels. Emergency crews shut off track power after derailments to prevent evacuees from being electrocuted.

Julian Robinson said he was stuck on one stopped train for 45 minutes to an hour before rescuers arrived to escort passengers along the tracks into the station.

“People didn’t panic,” he said. He said the station wasn’t smoky but there was a strong, acrid smell.

The number of subway delays have tripled in the past five years, to 70,000 per month. In recent months, several high-profile incidents have occurred, including subway trains stuck in tunnels for an hour or more. In April, a power outage backed up trains around the city and closed a key Manhattan station for 12 hours.

Commuter railroads have fared no better. A report earlier this month found rush-hour cancellations and delays on New York’s Long Island Rail Road are at the highest level in 10 years.