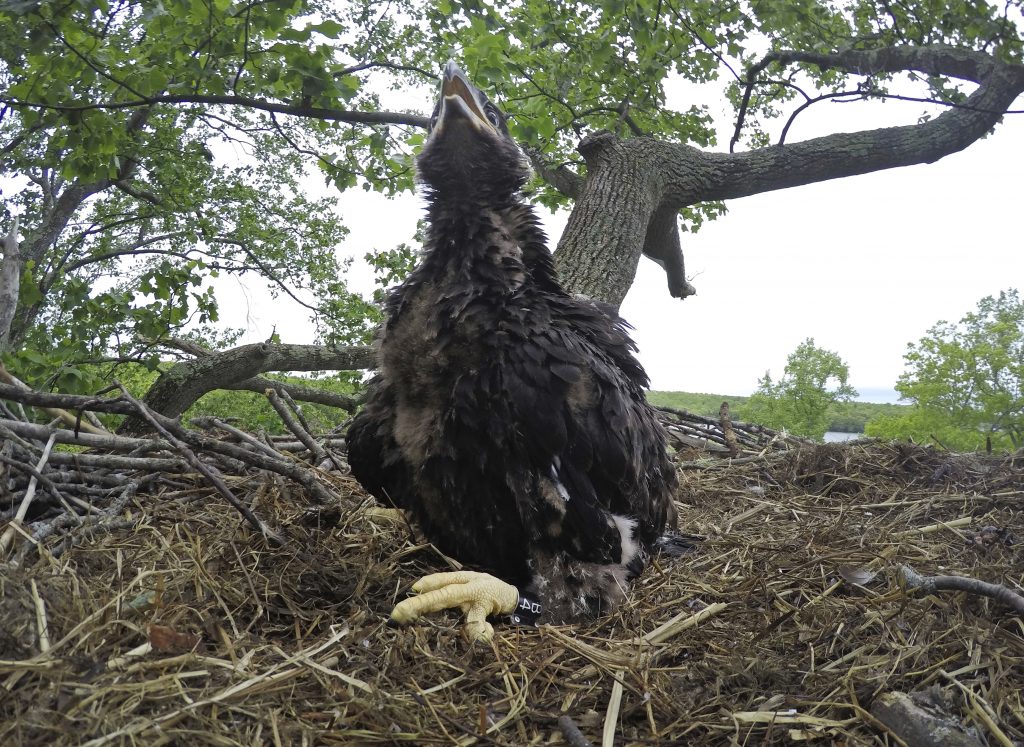 Independence Day traditions in one small Connecticut town are clashing with an effort to protect an iconic symbol of the United States.

Authorities in Columbia are asking residents this year to forgo shooting off fireworks for the sake of a family of bald eagles.

Last summer, a pair of eagles became the first to call Columbia Lake home since the species returned to the state in 1992.

This spring, an eaglet appeared in the nest, which is located about 100 feet (30 meters) up in a tree.

The bird is not yet old enough to fly and Brian Hess, a wildlife biologist with the state Department of Energy and Environmental Protection, said there is a real concern that the noise of fireworks could be enough to scare the eaglet out of the nest before it is ready.

“Eagles and fireworks are both sort of this great American tradition,” he said. “But I can’t think of a more perfectly startling thing than a firework.”

The town has shared a letter from Hess, urging residents to avoid shooting off fireworks during their Fourth of July celebrations.

Hess also is advising people not to visit the nest. Disturbing it, he said, could lead the birds to leave the area for good. Eagles, which mate for life, normally return to the same nesting site for years.

Hess said the eaglet should be ready to fly in a couple of weeks. He said it likely will stay with its parents through August before heading out on its own.

There is no official fireworks display in Columbia, but Mark Walter, the town administrator, says illegal displays are common, especially at the 282-acre (114-hectare) lake. It once was a popular summer vacation destination, but is now a year-round home to many middle-class and wealthy New Englanders.

“It’s similar to many towns that have a lake,” he said. “The Fourth of July is a holiday that people celebrate with fireworks.”

Bald eagles, though no longer considered an endangered species, are still threatened and are protected by federal and state laws because of their unique status as a symbol of the nation, Hess said.

Anyone found to have set off fireworks leading to harm would be prosecuted and could face fines and jail time.

“The DEEP will be available for dispatch if needed,” Walter said. “The resident trooper will be the enforcement agency to make any finds concerning illegal fireworks.”

Janice Thibodeau, who has lived on the lake for 28 years, said several of her neighbors already have purchased thousands of dollars in high-end fireworks, as they do each year.

She said the local homeowners association also has sent out a letter urging everyone to refrain from shooting them off this holiday, but she fears some people will just ignore it and go on with their celebrations as planned.

“I would not be happy if something happens to that eaglet,” she said. “I hope maybe they can just wait and shoot them off for Labor Day.”