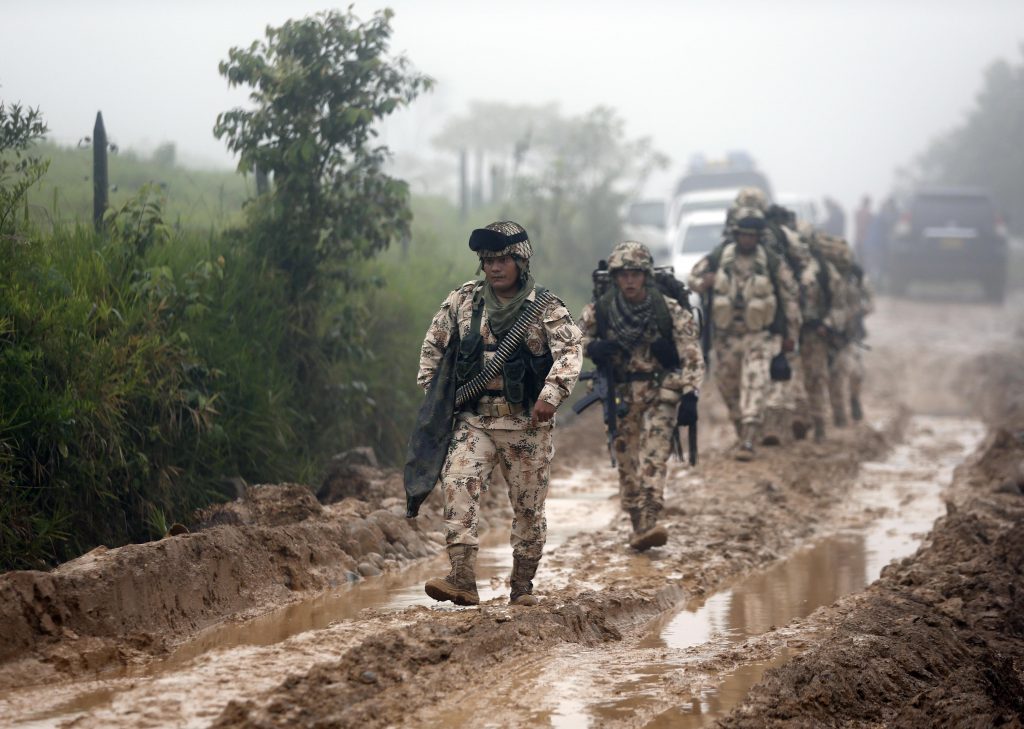 Guerrillas from Colombia’s largest rebel army no longer carry their guns along the road miles from the nearest city, a byway with mud so deep that even earth-moving equipment is paralyzed when it rains.

In recent days, each of the rebels stationed at this demobilization camp carved from Colombia’s eastern jungles have relinquished their weapons to United Nations observers and vowed to help end the country’s half-century conflict.

President Juan Manuel Santos travels here Tuesday to join Rodrigo Londono, top commander of the Revolutionary Armed Forces of Colombia, for a ceremony marking the conclusion of the disarmament process by 7,000 rebels nationwide.

Though hundreds of caches filled with larger weapons and explosives are still being cleared out, the U.N. on Monday certified that all individual firearms and weapons, except for a small number needed to safeguard the soon-to-disband camps, have been collected — 7,132 in total.

The historic feat places the nation one step closer to turning a page on Latin America’s longest-running conflict that left at least 250,000 people dead, another 60,000 disappeared and millions displaced.

“This is the most important decision a guerrilla can make, to give up weapons,” said Aldo Civico, a professor at Rutgers University and expert in Colombia’s conflict.

FARC rebels reached an agreement with Colombia’s government last year to give up their weapons and transition into a political party, but implementing that accord has been slow. A national referendum on the agreement failed by a popular vote, congress has struggled to pass laws implementing the revised accords and opposition lawmakers are threatening to overturn key aspects of the deal if they win the presidential election next year.

Controversy has also dogged the weapons handoff, with conservative former President Alvaro Uribe leading a chorus of opponents questioning whether the FARC has turned over its entire arsenal.

“In the administrations I oversaw, there was talk of many more weapons,” the still popular Uribe said in Madrid last week.

But frustration is also growing inside the rebel ranks and guerrilla-dominated communities.

Today a smooth paved road connects Mesetas with Bogota, but the community suffers from the same neglect and inequities that gave rise to the conflict. Like many other places torn by war, residents of the small town voted overwhelmingly for the peace agreement last year though many still harbor doubts as to whether the guerrillas will follow through on their pledge to completely disarm and abandon their involvement in Colombia’s flourishing criminal economy.

At the nearby Mariana Paez camp, the concrete housing units with running water, kitchens and electricity that the government promised are still a distant vision for rebels living under plastic tarps in what is one of the nation’s most underdeveloped demobilization zones.

The settlement, named for a prominent female ideologue killed in combat in 2009, is located high up on lush green mountains that have long been a FARC stronghold and was witness to some of the conflict’s worst atrocities. Peace tried to root itself here at least once before. In the nearby town of El Uribe, the rebels signed a cease-fire agreement with the government in 1984.

The accord eventually failed, paving the way for a decade-long bloodletting in which as many as 3,000 members of a FARC-aligned political party were gunned down.

Lingering memories of the extermination campaign weighs heavily on the guerrillas, many of whom expressed to The Associated Press their fears about returning to civilian life without weapons. The more-recent rash of killings of dozens of social leaders is also heightening concerns. Some guerrillas, who now wear jeans instead of fatigues, wonder if it is safe for them to leave.

Ilich Ceron, a member of the FARC’s communications team, said the rebels on Tuesday want to disprove any rumors about hidden stockpiles of weapons never declared or turned over to the U.N.

“We are giving the country our ethical and political commitment that we’re giving up weapons,” Ceron said Monday as crews built the stage where the disarmament ceremony would take place amid pouring rain.

But don’t expect a photo op of rebels surrendering their weapons. During years of peace negotiations in Cuba, Ceron said one thing the guerrillas made clear is that they never wanted to be seen as a vanquished army.

Experts at Notre Dame University’s Kroc Institute for International Peace Studies say the one-gun per fighter ratio seen in Colombia could be one of the highest in the world, far greater than the levels of disarmament seen in recent guerrilla conflicts from Guatemala to Nepal.

“There’s always a question mark,” he said. “What’s more important is we are witnessing step after step the willingness of the FARC to really demobilize and reintegrate and that should be reinforced by the state and government in fulfilling the promises and agreements signed.”