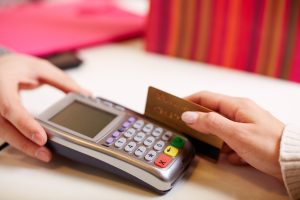 Credit or debit? For routine purchases, Americans are likelier to say debit.

So what’s their strategy for getting you to use the credit card? Temptation. Issuers have loaded up their high-end credit cards with travel perks and other rewards.

It seems to be working. In a survey of U.S. consumers conducted every year by card processor Total System Services, Inc., or TSYS, the popularity of debit has been falling for several years. In 2016, credit overtook debit as Americans’ favorite form of payment.

Last year was also when JPMorgan Chase launched a new premium credit card, the Chase Sapphire Reserve card, with much fanfare. So many people signed up, most of them millennials, that Chase temporarily ran out of cards. American Express counterattacked in March by sweetening the perks on its premium Platinum card. An Amex executive said the company is in “hand-to-hand combat” with Chase to win over new card customers.

“You have issuers offering better rewards to try to get the attention of the consumer,” said David Robertson, publisher of the Nilson Report. “There’s a war on among the top players.”

Spending on both credit and debit cards generally rises each year, as the economy grows and as cards gradually take more share from checks and cash. But credit card use has been accelerating faster.

The companies have slowly made it easier to qualify for credit cards, nine years after the global financial crisis. Consumers are also feeling less inhibited about taking on debt, Robertson said.

And how they love their rewards. Asked in the TSYS survey about the favorite feature on their credit card, 59 percent cited rewards. That’s up seven points in two years, making rewards twice as popular as any other card feature.

While generous travel benefits are the main perks of premium credit cards, the vast majority of consumers are more focused on getting cash back.

Generational change could be driving some of these trends. As the large millennial generation gets older, they’re making more money and feeling more confident about taking out credit cards, said Aite Group analyst Kevin Morrison.

Credit cards are most popular among Americans 25 to 44. Both younger consumers, who often have trouble qualifying for credit cards, and older consumers prefer debit.

Inundated by credit card promotions, these millennials are carefully choosing the cards with the best perks, Morrison said. Compared to older generations, “they’re just more savvy,” he said. “They scrutinize offers and deals. At the end of the day, they recognize credit as a tool.”

Still, there are dangers to chasing credit card rewards. Reward cards charge annual fees that can exceed $500 a year. They also tend to charge higher interest rates than other cards.

“The use of credit cards with rewards can be valuable,” said financial counselor Willa Williams, of Trinity Financial Coaching in Grosse Pointe, Michigan. “You just have to be disciplined enough to make purchases for which you have the money to pay the bill.”