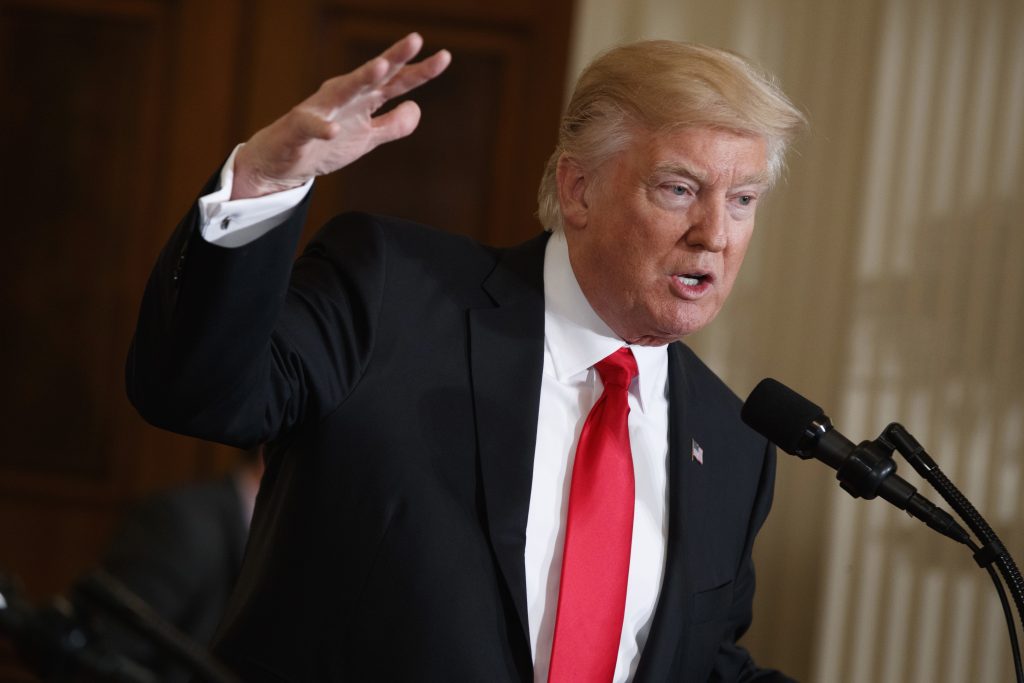 President Donald Trump is eager to meet Russian President Vladimir Putin with full diplomatic bells and whistles when the two are in Germany for a multinational summit next month. But the idea is exposing deep divisions within the administration on the best way to approach Moscow in the midst of an ongoing investigation into Russian meddling in the U.S. elections.

Many administration officials believe the U.S. needs to maintain its distance from Russia at such a sensitive time — and interact only with great caution.

But Pres. Trump and some others within his administration have been pressing for a full bilateral meeting. He’s calling for media access and all the typical protocol associated with such sessions, even as officials within the State Department and National Security Council urge more restraint, according to a current and a former administration official.

Some advisers have recommended that the president instead do either a quick, informal “pull-aside” on the sidelines of the summit, or that the U.S. and Russian delegations hold “strategic stability talks,” which typically don’t involve the presidents. The officials spoke anonymously to discuss private policy discussions.

The contrasting views underscore differing views within the administration on overall Russia policy, and Trump’s eagerness to develop a working relationship with Russia despite the ongoing investigations.

Asked about the AP report that Trump is eager for a full bilateral meeting, Putin’s spokesman Dmitry Peskov told reporters in Moscow on Monday that “the protocol side of it is secondary.” The two leaders will be attending the same event in the same place at the same time, Peskov said, so “in any case there will be a chance to meet.” Peskov added, however, that no progress in hammering out the details of the meeting has been made yet.

There are potential benefits to a meeting with Putin. A face-to-face meeting can humanize the two sides and often removes some of the intrigue involved in impersonal, telephone communication. Trump — the ultimate dealmaker — has repeatedly suggested that he can replace the Obama-era damage in the U.S.-Russia relationship with a partnership, particularly on issues like the ongoing Syria conflict.

There are big risks, though. Trump is known to veer off-script, creating the possibility for a high-stakes diplomatic blunder. In a brief Oval Office meeting with top Russian diplomats last month, Trump revealed highly classified information about an Islamic State terrorist group threat to airlines that was relayed to him by Israel, according to a senior administration official. The White House defended the disclosures as “wholly appropriate.”

In addition, many observers warn that Putin is not to be trusted.

Oleg Kalugin, a former general with Russia’s main security agency, known as the KGB, said Putin, a shrewd and experienced politician, has “other priorities” than discussing the accusations that Russia hacked the U.S. election with Trump, such as easing sanctions, raising oil prices, as well as next year’s presidential elections in Russia.

“Putin knows how to redirect a conversation in his favor,” Kalugin said.

Nina Khrushcheva, a Russian affairs professor at the New School, said Trump is in an “impossible position.”

The White House said no final decision has been made about whether a meeting will take place. It did not respond to questions about the opposing views within the administration.

Bilateral meetings are common during summits like the G20, where many world leaders and their advisers are gathered in one place. The meetings are typically highly choreographed affairs, with everything from the way the two leaders shake hands to the looks that they exchange and the actual words spoken offering glimpses into the state of affairs.

The last U.S.-Russia bilateral meeting was a 2015 encounter between Putin and President Barack Obama that began with an awkward handshake and ended with progress on the brutal civil war in Syria.

That 2015 meeting, the first in two years, involved a 90-minute sit-down at U.N. headquarters. Putin and U.S. officials later said the two leaders had made progress on issues related to Syria, which had strained their already tense relationship. For the Obama administration, cautious engagement was the name of the game, with the U.S. working tirelessly to find middle ground with Moscow on Syria, Ukraine and other issues.

The disconnect between Trump and his advisers in the State Department and National Security Council over Russia runs deeper than the debate over a G20 bilateral.

A former administration official who spoke anonymously to discuss classified information said that frustration is growing among foreign policy advisers over the failure of the White House to embrace a more cautious and critical approach to Russia. All 17 U.S. intelligence agencies have agreed Russia was behind last year’s hack of Democratic email systems and tried to influence the 2016 election to benefit Trump.

Trump has to directly “say to Putin, ‘We’re not happy about you interfering in our election,'” said Steven Pifer, a former U.S. ambassador to Ukraine. “If you don’t say that, you are going to get hammered by the press and Congress and you can guarantee Congress will pass sanctions legislation against Russia.”

“They also need to keep their expectations very, very modest,” added Pifer. “If they aim for a homerun in Hamburg, my guess is they’ll strike out.”