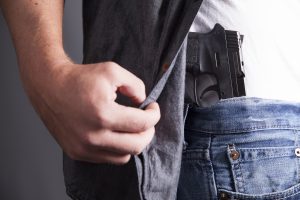 The Supreme Court will not intervene in a lower court’s decision that the Second Amendment does not protect the right to carry a concealed weapon in public.

Gun-rights advocates had asked the court to review a California law that gives local sheriffs power to require that those seeking concealed-carry permits show a particular need, such as a threat.

“Whether the Second Amendment secures an individual right to bear arms for self-defense outside the home” is perhaps the “single most important unresolved Second Amendment question,” said a brief filed by the California Rifle and Pistol Association Foundation.

Because California bans carrying weapons openly in public, the association said the state law can effectively prohibit carrying a gun in any manner outside the home.

In a 7 to 4 decision, the U.S. Court of Appeals for the 9th Circuit ruled that the San Diego sheriff’s policy of reserving concealed-carry licenses only for those who can document a special need for self-defense passes constitutional muster.

“Based on the overwhelming consensus of historical sources,” the court concluded that “the protection of the Second Amendment — whatever the scope of that protection may be — simply does not extend to the carrying of concealed firearms in public by members of the general public.”

The Supreme Court has also upheld laws in Maryland and New Jersey that impose such restrictions on concealed-carry permits.

Justice Clarence Thomas, joined by Justice Neil Gorsuch, said the court should have accepted the case.

“The Court’s decision to deny certiorari in this case reflects a distressing trend: the treatment of the Second Amendment as a disfavored right,” Thomas wrote, adding, “For those of us who work in marbled halls, guarded constantly by a vigilant and dedicated police force, the guarantees of the Second Amendment might seem antiquated and superfluous. But the Framers made a clear choice: They reserved to all Americans the right to bear arms for self-defense. I do not think we should stand by idly while a State denies its citizens that right, particularly when their very lives may depend on it.”