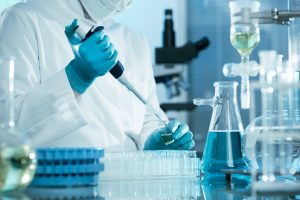 A newly developed computerized search mechanism could speed the identification of potential drug treatments for a range of diseases that have thus far proved highly resistant.

Antibiotics for treating particularly resistant diseases, molecules that block immune system overreactions, molecules that inhibit the growth of cancer cells by removing excess iron, molecules that may increase the digestion of fats: all these and more have been discovered in recent years using a unique computerized approach developed at Hebrew University in Yerushalayim.

Over the past five years, an Iterative Stochastic Elimination (ISE) algorithm developed in the laboratory of Prof. Amiram Goldblum at H.U.’s Institute for Drug Research, has been applied to the discovery of potential drugs. The Institute is part of the School of Pharmacy in the Faculty of Medicine. First tested to solve problems in the structure and function of proteins, the algorithm has since been used to dramatically reduce drug discovery times — from years to months and even to weeks.

Goldblum’s solution is different from algorithms called “heuristics,” which are based on deriving solutions using logic and intuition, and suggests better solutions. In this instance, the algorithm produces a model for the activity of small molecules on one or more proteins known to cause the disease. A model is a set of filters of physico-chemical properties that distinguish between active and non-active molecules, or between more and less active ones. Millions of molecules can then be screened by the model, which enables the scoring of each molecule by a number that reflects its ability to pass through the filters based on its own physico-chemical properties.

A model of this type is usually built in a few hours and is capable of screening millions of molecules in less than a day. Therefore, within a few days or more, it is possible to make initial predictions about the candidate molecules for a specific activity to combat a disease. Most of those candidates have never been known before to have any biological activity.
On the strength of Goldblum’s technology, the company Pepticom was founded in 2011 by Yissum, the Technology Transfer arm of the Hebrew University, to revolutionize the discovery of novel peptide drug candidates. Pepticom’s key asset is an exceptional artificial intelligence platform aimed at designing peptide ligands based upon solved crystal structures of proteins.

The algorithm can be applied to other types of problems in a broad range of different fields, including land transport, aviation, communications and biological systems.

In transportation, this could mean finding alternative ways to get from one point to another using traffic data on each of the alternative roads leading between the two points. In aviation, an optimal arrangement of landings and takeoffs at busy airports. In telecommunications, finding the least expensive routes within a complex array of communication cables. And in biology, a model that is constructed on the basis of a few dozen or hundreds of molecules serves to screen millions of molecules and to discover new drug candidates. These are then sent to experimental labs to be developed further, and in some cases, have been crucial in furthering the development of treatment for Alzheimer’s disease and different forms of cancer.