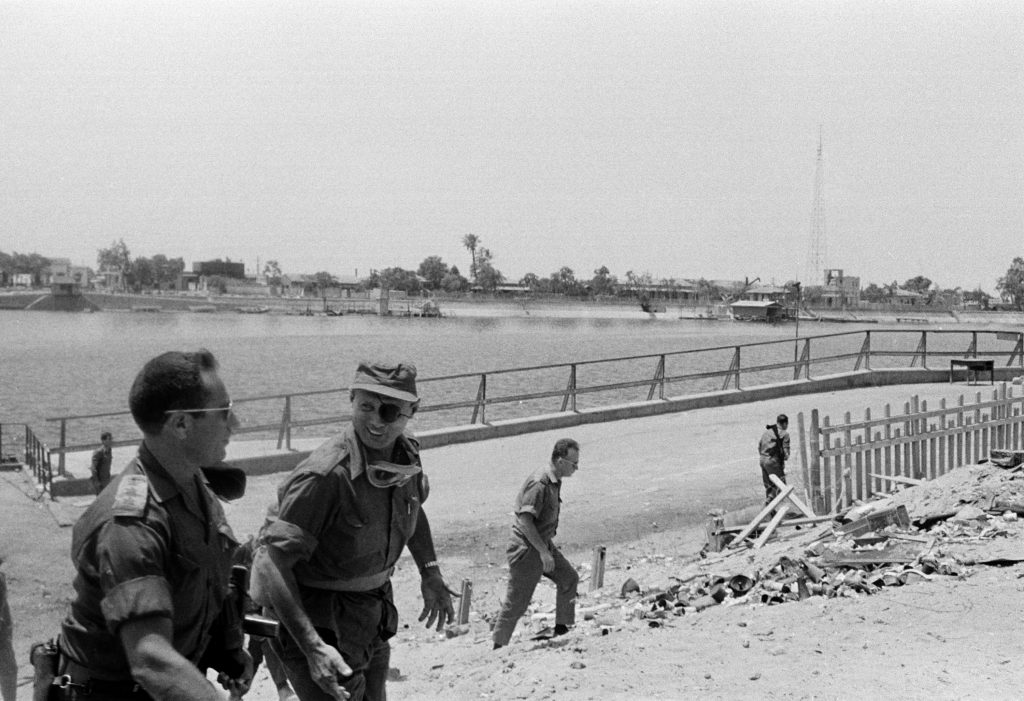 Fifty years after the Six Day War, the IDF archives are releasing the classified protocols of the meetings of the General Staff, including the final meeting before the war and the first meeting after the victory.

On the evening of May 19, 1967, the general staff met to consider the apparent Arab mobilization for war. Several generals asked, where is the West, where are the Americans?

Replied Chief of Staff Yitzchak Rabin: “The time has come to stop deluding ourselves that someone will come help us…We cannot trust the Americans to come help us…”

The members of the IDF General Staff convened for their next meeting exactly a week later, on June 19. The fear of possible Soviet military intervention weighed heavily on the generals, as the protocols show:

Military Intelligence director Gen. Aharon Yariv assessed the amount of time it would take for Egypt to reorganize. “We know about a Russian decision to give Egypt everything possible, and fast.” The Egyptian army is a modern one, Yariv said, but in character, they “stayed the same Egyptians.”

The Military Intelligence director commented, “I would say that we should not assume that over the next two to three months the Arab armies will attack us…The ones that need to be suspected of this are the Syrians. Why? Because they are Syrians.”

General Yeshayahu Gavish did not agree. General David Elazar added that he thought the Syrians were much more badly damaged than they thought.

Gen. Uzi Narkiss, chief of Central Command, commented on the behavior of the Arabs of Yehudah and Shomron: “I accept that – meanwhile these people are quieter and more easygoing than all the Jews that are walking around over there…”

Rabin spoke about the need to reorganize the IDF and revealed that in the broader sphere, Jews that lived in Egypt were harmed because they were imprisoned and were now considered hostages.

Towards the end of the meeting, there was a brief discussion about the Arabs of Yerushalayim, and it was decided not to evacuate populations.

Most of Am Yisrael did not know that during those same days, the General Staff met again, anxious that war could rapidly develop because of Soviet intervention.

From everything I have learned about Russian intentions,” Yariv said, “I reach the conclusion that there is no Russian pressure. At the same time, I can inform you that there is a change in Washington’s approach, and the one who is working for the benefit of Israel is the United States.

Rabin asked about the possibility of Soviet action, and Yariv replied that the primary danger was that they would take action against us in the air. General Chaim Bar-Lev asked what were the chances of them doing something significant and decisive. Yariv repeated what he already said: “I’m not at all sure that they will exercise force against us.”

General Ezer Weizmann interjected: “Why are you getting so excited? I’m not afraid of Russian pilots. They don’t have horns or tails. They are pilots and every average Israeli pilot is at least a few times better than they are.”

Defense Minister Moshe Dayan addressed the Russian issue: “There is a lot of fear for the state of Israel that there will be panic, or it will be overcome by shock…”

Dayan concluded by saying that it was necessary to give the public two “inoculations” so to speak. The first is that “the Russians are coming” and the second is that “if they come, there will be a battle.”

General David Elazar: “In my opinion, war won’t break out in the next two years..”

General Yisrael Tal: “We need to be on constant alert… .We went out [to battle] without cannonballs for the gun barrels. Now we are talking about a different kind of danger and that’s why we need to go on to distribute gas masks and improve the civilian shelters and more.”

General Eyal spoke about the dead and wounded of the war. With regard to the captives that he was dealing with, he clarified that there was no progress at that point.

The most dramatic moment of the meeting came at the very end. Rabin concluded in one sentence, which left many at the table open-mouthed in disbelief at what he said. Rabin said that they reached a point that they had to consider exactly what to do: “The option of withdrawal is also an option,” he remarked. He didn’t allow any questions or comments after that, and closed the meeting.