Amazon’s Bezos Disrupts Another Frontier, With Just One Tweet 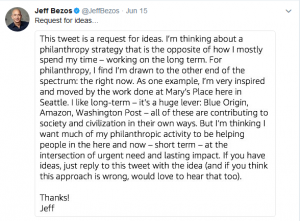 Amazon Inc.’s Jeff Bezos has remained largely invisible in the world of philanthropy. That changed last week in a single tweet — followed by 42,000 more.

The tycoon’s request to his Twitter followers a week ago asking how he can best use his wealth to help people “right now” has set off a frenzy of responses from every corner of the world. They include pleas to support health care, education and loan forgiveness.

The unusually public approach bears the stamp of Silicon Valley disruption, and it’s turning heads in a realm that usually enlists consultants and experts to parcel out big-dollar gifts. Seeking ideas on Twitter shows Bezos is acting like a venture capitalist, scouring proposals in the hope of finding a few worthy of investment, says Eileen Heisman, chief executive officer of the National Philanthropic Trust, a charity that manages $4.2 billion on behalf of individual philanthropists.

The crowd-sourcing strategy could signify an expansion of Bezos’ relatively restrained approach to philanthropy. The Bezos Family Foundation, which is best known for its support of children’s education, has been largely funded by his parents from Amazon holdings they acquired as early investors in their son’s enterprise. Outside of that, Bezos and his family’s known donations have totaled about $100 million, including gifts to Princeton University and Seattle’s Fred Hutchinson Cancer Research Center, according to the Chronicle of Philanthropy. That pales in comparison to the billions of dollars donated by Bill Gates and Warren Buffett.

“Everybody has been watching to see when he would get into the philanthropy game, what he would do and then how he would do it,” said Stacy Palmer, editor of the Chronicle of Philanthropy. “Given what he did with Amazon, I don’t think it surprises anybody that he’s doing it in an untraditional way.”

Bezos amassed an $86 billion fortune while building Amazon into the world’s largest online retailer. Just hours after his tweet, he announced the company’s takeover of organic grocer Whole Foods Market Inc., and he’s been tight-lipped since. He hasn’t yet responded to any suggestions, nor has he indicated publicly how much he intends to donate or when it might start. Amazon and the Bezos Family Foundation didn’t respond to requests for comment.

And while legions on Twitter are eager to help him decide, some of his peers are cautioning against the approach. “The most effective philanthropy is targeted,” said Irish billionaire Denis O’Brien, whose Digicel Foundation is the largest builder of schools in the Caribbean. “He will get thousands of replies, but at the end of the day you do things that are strategic and do things that you are interested in. You could be overwhelmed with choices and ideas.”

Other billionaires are more reticent. “Not for me to tell him what to do with his money,” said Leon Cooperman — who has pledged to give away the majority of his $2.3 billion fortune — in response to an email from Bloomberg. Several other wealthy philanthropists contacted for comment didn’t respond or declined to weigh in.

To be sure, other technology entrepreneurs have put twists on philanthropy.

Facebook’s Mark Zuckerberg and his wife , who pledged to give away 99 percent of the $63 billion stake in the social network, are channeling their efforts with a limited liability company. That gives the couple more flexibility than a traditional foundation; for example, they don’t have to give to charity every year and can make investments and political donations. Sean Parker, who has a $3 billion net worth, is using a cancer research institute he funded to the tune of $250 million to overturn traditional research practices.

“The world is full of pretty stodgy foundations that generally do pretty safe things,” Parker said in a December interview with Bloomberg. “I’d rather see what happens when you do something totally different that’s never been tried.”

Even if Bezos is able to outsource idea generation, he will likely need at least some apparatus to make a meaningful impact. Demands on his time already include Amazon, his ownership of The Washington Post, and his funding of space exploration company Blue Origin.

One earlier attempt at crowd-sourcing — via the more traditional venue of a newspaper — made a smaller splash and still required a lot of work. In 2011, billionaire Bill Conway, a co-founder of the Carlyle Group, told a columnist he wanted advice on how to donate at least $1 billion. The response, about 700 emails after a week, required four people to vet. Bezos already has 60 times more to consider.

“I don’t imagine he wants to be physically writing checks all day,” said Emmett Carson, CEO of the Silicon Valley Community Foundation, which manages $8.2 billion in assets and helps philanthropists distribute grants.

Even if Bezos ramps up quickly, he’ll have a way to go to catch up with tech titans before him.

Bill and Melinda Gates have given more than $30 billion of stock and cash since 1994, valued at the time of gift, according to a review of two decades worth of Gates Foundation tax returns, annual reports and regulatory filings. Gates has probably directed more than 700 million Microsoft shares into his foundation, adjusting for stock splits. Those would be worth about $50 billion today had he held onto them, enough to catapult his fortune to $140 billion, according to data compiled by Bloomberg.

Buffett’s charity efforts kicked off in earnest in 2006, and since then he has given about 270 million Berkshire Hathaway Class B shares, worth around $24 billion at the time of the donations, to charities led by the Gates Foundation. Those shares are now worth more than $45 billion, according to data compiled by Bloomberg. The Gates Foundation has given away $36.7 billion and has an endowment of $40.6 billion, Andrew Estrada, a foundation spokesman, said in an email. If Bezos intends to match those kind of numbers, it is unlikely he’ll be able to rely solely on crowd-sourcing.

“It’s an overwhelming task that is innovative now but won’t sustain itself long-term because of the resources and time involved in filtering ideas,” said National Philanthropic Trust’s Heisman. “In five years his approach will likely have evolved into something very different, just like Amazon has over and over again.”