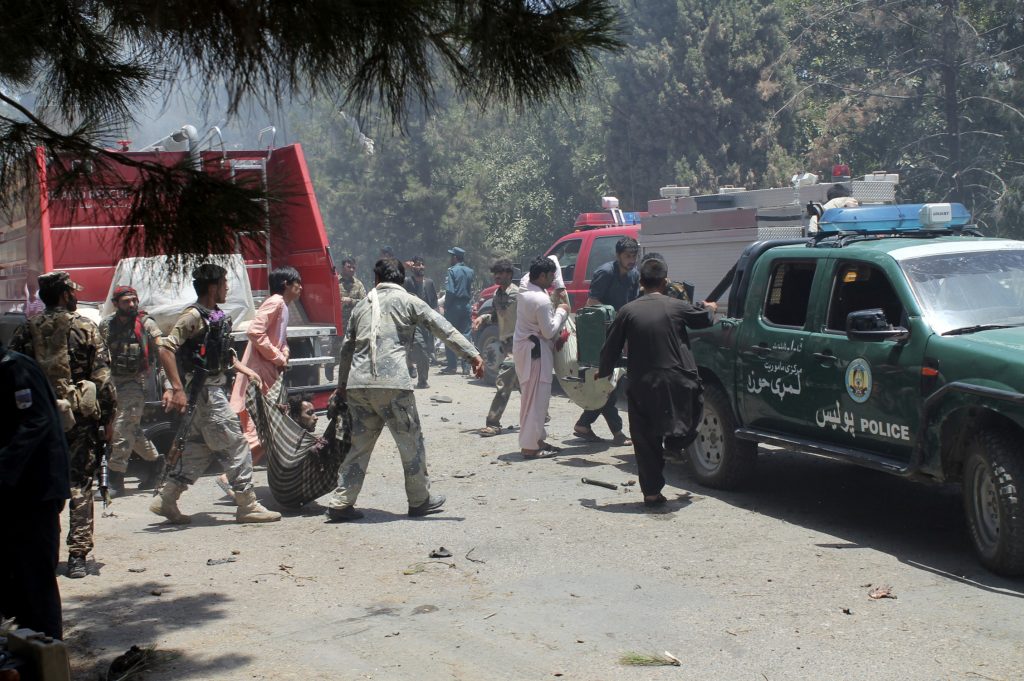 A car bomb exploded outside a bank on Thursday in Afghanistan’s restive Helmand province, killing 29 people waiting to collect their monthly salaries, said the provincial governor.

The car detonated in the parking lot of the New Kabul Bank in the provincial capital of Lashkar Gah, where dozens of people, both civilians and security personnel, had gathered.

The weekend marks the end of the Muslim fasting month of Ramadan and ushers in several days of celebration. The month, normally a time of prayer and reflection, has been marred by a string of bloody attacks across the country that have claimed hundreds of lives.

Governor Hayatullah Hayat said by phone that most of those killed were civilians and at least 60 people were wounded.

Soldiers guarding the bank fired their weapons into the air, in apparent panic, prompting reports that gunmen had assailed the building as well, which turned out not to be the case.

While no group has yet claimed responsibility for the assault, Taliban insurgents have in the past targeted banks in both Helmand and the eastern city of Jalalabad.

A spokesman for President Ashraf Ghani, Hussien Murtazawi, said the enemy after “facing defeat in the battlefield is now targeting the civilians.”

Helmand, has been the scene of fierce fighting against the Taliban for years, involving British troops, U.S. Marines and Afghan forces.

It has long been considered Afghanistan’s most violent province, and hundreds of Marines died there in battles between 2008 and 2014, when they were pulled out as part of the drawdown of U.S. troops.

In the past few years, the Taliban experienced a resurgence in the province, taking large swaths of the countryside in 2016.

A few hundred U.S. Marines recently returned to the province to bolster government forces and U.S. forces have carried out airstrikes. The Defense Department is finalizing plans to send more troops to Afghanistan where there are now 8,400 U.S. forces.

The capital, Lashkar Gah, has repeatedly come under attack from Taliban forces.

Both the Taliban and the even more brutal rival militants of the Islamic State group have unleashed and broadened a wave of deadly attacks since the start of the year.

The worsening security situation coincides with increasing political instability brought on by a power struggle in the government and rising frustration among the public about the inability of authorities to address even their most basic concerns.

On Wednesday, in its latest report, the United Nations Assistance Mission in Afghanistan termed the security situation in the country as “intensely volatile.”

The U.N. special envoy to Afghanistan, Tadamichi Yamamoto, told the Security Council on Wednesday that an even more dangerous and fragile period for the country could be ahead.