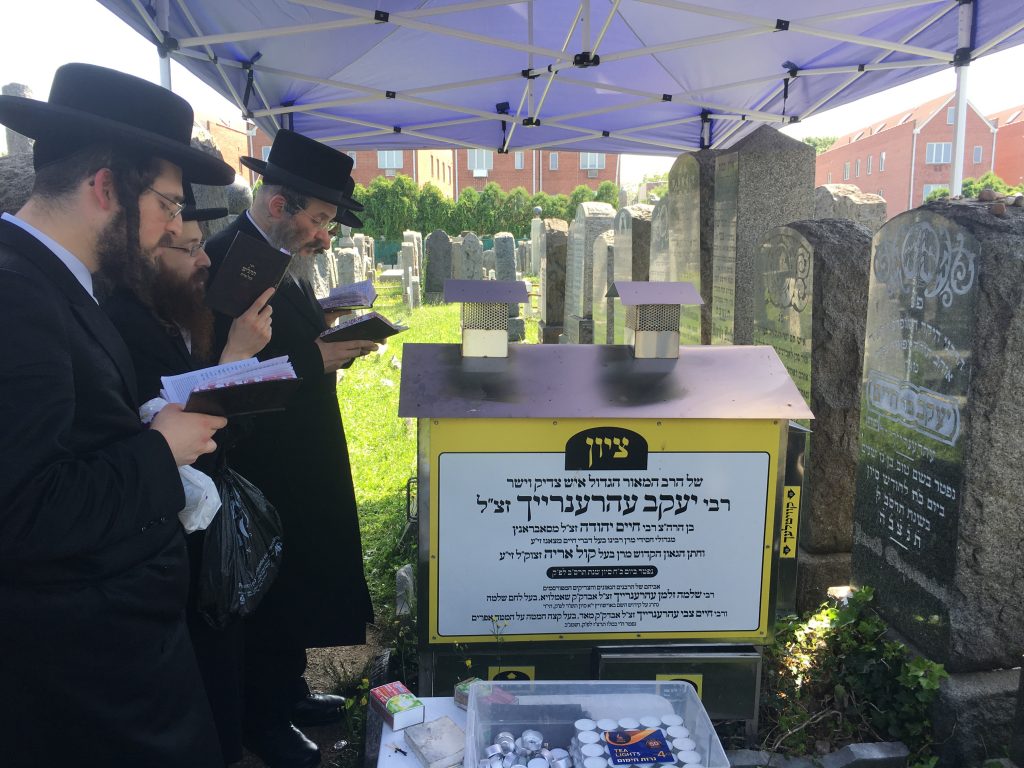 Hundreds of people went to Washington Cemetery in Brooklyn Thursday to daven at the tziyun of Harav Yaakov Ehrenreich, zt”l, on 28 Sivan, his 115th yahrtzeit. Dozens more will be going on Friday, Erev Rosh Chodesh.

The tziyun is located in Washington Cemetery’s Section 3, Post 291 – the Ahavas Yeshuren Anshei Ungaren chelkah – accessible from Bay Parkway or 21st Ave. There are yellow signs leading to the tziyun.

Below, we reprint an article (lightly edited) that appeared in Hamodia on the occasion of the 110th yahrtzeit.

Reb Yaakov Ehrenreich’s father Reb Chaim Yehudah was a Sanzer chassid, who descended from Harav Shabbtai Sheftel Horowitz of Prague, zt”l, (1561-1619), mechaber of the Kabbalistic work Shefa Tal. He resided in Sabrantz, Hungary, and was a talmid of Harav Shlomo Zalman Ullman, Rav of Makava, Hungary, mechaber of Yerios Shlomo.

Reb Yaakov was chosen as a son-in-law of the sublime Gaon and tzaddik Harav Avraham Yehudah Hakohen Schwartz, zt”l, Rav of Beregsazs and Mahd in Hungary and mechaber of She’eilos U’Teshuvos Kol Aryeh (known as the Kol Aryeh after his sefer), upon his marriage to the Kol Aryeh’s oldest daughter Hendel Reizel. The Kol Aryeh took Reb Yaakov as a son-in-law upon the strong recommendation of the Divrei Chaim of Sanz, who was familiar with the Ehrenreich family and with whom he had a close kesher.

After their marriage, the Ehrenreichs initially resided with the family of the Kol Aryeh in Beregsazs, and afterwards they relocated to Sabrantz, Reb Yaakov’s native city.

The Ehrenreichs had two sons and four daughters.

In the 1880s, Reb Yaakov was compelled to flee his native Hungary. Reb Yaakov owned a distillery in Sabrantz where, according to one version of the story, one of the workers was accidentally killed on the job. Aware that the authorities were planning to penalize him with a lengthy prison sentence since they erroneously suspected foul play on his part, Reb Yaakov consulted the Kol Aryeh, who advised him to leave Hungary. At first, he planned to travel to Eretz Yisrael; but when this proved problematic, his father-in-law told him to relocate to the United States, specifically to New York, with his wife and daughters. His sons remained behind at the behest of the Kol Aryeh, who foresaw that they were destined for gadlus. (Indeed, they became Gedolei Yisrael, as will be seen.)

In America, Reb Yaakov served as a role model for others as he raised a family of frum, ehrliche Yidden and was active as a prominent askan for Torah causes. He served as Rosh Hakahal of Chevra Ahavas Yeshurun on the Lower East Side, located at 638 East 6th Street. (Unlike many former shuls of that period that became non-Jewish houses of worship, the building today serves as a community center.)

After Reb Yaakov’s petirah on 28 Sivan 5662/July 3, 1902, at the age of 57, he was brought to rest the following day at Washington Cemetery on the outskirts of Boro Park. His matzeivah describes him as a “Rabbanei hayakar, hamuflag v’yerei Hashem oheiv Torah u’poel tzedek.”

His sons, who had remained in Europe, developed into Gedolei Yisrael under the tutelage of their grandfather, the Kol Aryeh, as foreseen.

His older son Harav Shlomo Zalman was Rav of Shamloh in Hungary and authored Leshem Shlomo and other sefarim. His younger son Harav Chaim Zvi succeeded the Kol Aryeh as Rav of Mahd and wrote Ketzei Hamateh, a commentary on the classic Mateh Ephraim on the halachos of Elul and Tishrei, and She’eilos U’Teshuvos Kav Chaim.

Reb Yaakov’s daughters married and established homes in America that carried on their family’s legacy.

After Reb Yaakov’s petirah, his wife, Hendel Reizel, returned to Hungary where she resided in Shamloh near Harav Shlomo Zalman. She was niftar on 27 Av 5684/Aug. 27, 1924 and was buried in that city. Reb Shlomo Zalman had an ohel constructed over her grave, as is done for great tzaddikim, such was the esteem in which he held his mother.

In his divrei hesped for his mother, as recorded in his sefer Avnei Hamakom, Reb Shlomo Zalman recalled his mother’s powerful koach hatefillah and how in the zechus of those tefillos during the harrowing years of World War I, the family was shielded from harm.

He relates that together with her husband, she closely supervised her children’s chinuch, always inspiring them towards growth in Torah and yiras Shamayim. She spurned all material concerns; her sole interest was that her sons would become talmidei chachamim. He termed her a “bas melech,” having been raised in the house of Torah royalty of her father, the Kol Aryeh.

Together with his uncle, the Beis Naftali — the Kol Aryeh’s oldest son — Harav Shlomo Zalman organized the teshuvos of his grandfather and published them as She’eilos U’Teshuvos Kol Aryeh. He and his brother Harav Chaim Zvi compiled the Kol Aryeh’s thoughts on Torah and the moadim, which was published as Kol Aryeh al HaTorah U’moadim.

The works of the Kol Aryeh and his descendants are published by the Kol Aryeh Research Institute, which was founded by Harav Eliezer Ehrenreich, the Mahder Rav, zt”l, a grandchild of Reb Yaakov, who was niftar in Brooklyn in 2013.