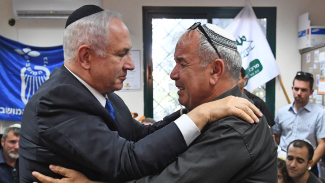 Security forces on Wednesday arrested the mother of one of the terrorists who carried out the terror attack in Yerushalayim on Friday. The mother, a resident of the village of Dir Abu Mashal, is suspected of encouraging the terrorists to carry out their attack. She has spoken out in Arabic media in recent days of the need for a new intifada, and how other young Arabs should attack Israelis as her son did.

Also arrested was an Arab resident of Yerushalayim, who is accused of transporting the terrorists to the site of the attack, near the Damascus Gate (Sha’ar Shechem). Security forces said in a statement that the man, who drove the terrorists to the site of the attack, was aware of their intentions and was thus a full accomplice in the attack that took the life of Border Guard Hadas Malka, Hy”d. The driver is to be indicted Wednesday, and police will ask for an extension of his remand until the end of proceedings against him.

Overnight Tuesday, police confiscated a large cache of illegal weapons in the village of Daburiya in northern Israel. The weapons included M-16 rifles, ammunition, handguns, and other items. Two individuals were arrested. Police believe that the weapons were stolen from IDF bases, and were being used by criminal groups in northern Israel. Police were also checking if the weapons had been used in terror attacks.

Overnight Tuesday, security officials said they arrested 8 wanted security suspects in other areas in Yehudah and Shomron. The suspects were wanted for participating in rioting and throwing stones and firebombs that endangered Israeli civilians and IDF soldiers. Several of the suspects were also charged with belonging to Hamas. All were being questioned on their activities by security forces.