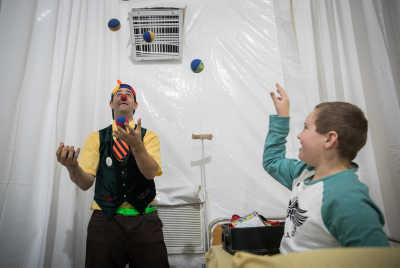 Health Minister Rabbi Yaakov Litzman said that he was “shocked” at the allegations that a crisis that has led to the mass resignation of staff from the pediatric hemato-oncology unit of Hadassah Ein Kerem Hospital was actually engineered by the head of the unit, Dr. Michael Weintraub, who was allegedly seeking a better deal from Shaare Tzedek Hospital. “It is hard to believe that senior medical staff would try to commit a putsch at the hospital, and surreptitiously try to take the unit’s workers – nurses, management, and social workers – out of the hospital just to ruin it. It just does not make sense. They are destroying the health system with their actions. I am ordering an immediate investigation into this matter, and how and whether Shaare Tzedek was involved in this,” he said.

Minister Rabbi Litzman spoke at a medical conference in Tel Aviv Wednesday, after Channel Two revealed Tuesday night the background to the resignation of the members of Hadassah Ein Kerem’s childhood oncology staff in March, which took effect earlier in June. According to the report, the resignations were engineered by Weintraub, who sought to bring the staff over to Shaare Tzedek, which had expressed interest in opening a similar unit.

The doctors resigned after hospital director Ze’ev Rotstein began a reorganization of the unit, as the hospital was in poor financial shape. Among other things, they accused him of preferring foreign patients over Israeli ones, as the families of young cancer patients from other countries were paying cash. The doctors claimed they could not provide appropriate treatment for patients at the hospital, as the resources they needed were being used up by the foreign patients. Earlier in June, doctors and set up a protest tent at Sacher Park in Jerusalem, calling it a “cancer field hospital.”

On Wednesday, Yediot Acharonot published copies of e-mail communications between Weintraub, Hadassah Ein Kerem staff, and Shaare Tzedek officials confirming the Channel Two story. The resignations were apparently planned well before the crisis developed in March; one message, dated January 12th, discusses the negotiations apparently going on for some time with Shaare Tzedek. Written by Natan Gorelik, head of the unit’s social worker staff, the message says that the workers need enough time “to understand what is happening on the Shaare Tzedek front and move forward.” Other messages, from November 2016 and sent by Weintraub to Shaare Tzedek staff, discuss the needs of a pediatric hemato-oncology unit, including how much space would be needed.

The Hadassah Ein Kerem saga has been a major black eye for the Health Ministry, which has been accused of ignoring a crisis that was costing the lives of sick children. However, said Minister Rabbi Litzman, his office had been in constant touch with doctors in an effort to resolve the crisis – except that there had been almost no movement on the other side. “Now I understand why they did not respond,” he said Wednesday. With that, “I do not take offense at anything anyone has done. I am urging the doctors to come back to work, for the sake of the children. Any promises I have made to improve the situation at Hadassah Ein Kerem will be fulfilled, I will keep my promises.”

In a statement, Hadassah Ein Kerem doctors continued to claim that they were responding to specific circumstances at the hospital, and that the crisis had not been “manufactured. Professor Rotstein decided to unite the hospital’s pediatric and adult hemato-oncology departments, even though the children have very different needs. There is no similar situation in any hospital anywhere else, and it was made without consulting with experts. We said that if this decision was not changed we would resign. Instead of paying attention, Professor Rotstein and the Health Ministry decided to harden their hearts. Even now there is no reasonable plan for running the department. Several approaches, including arbitration, were suggested to solve the crisis, but the Ministry did not agree. All that has emerged from this has been the sullying of our reputations in the media.”

In a statement, Shaare Tzedek denied coordinating anything with Weintraub. Professor Yonatan Halevy, with whom Weintraub had been in contact, “announced months ago that Shaare Tzedek would not proceed with setting up a pediatric hemato-oncology unit until the current crisis was resolved. All of his involvement in this matter has been to try and resolve the crisis. Contrary to what has been presented in this media blitz, Professor Halevy very early on in this saga urged the Hadassah Ein Kerem doctors to return to their positions, and all of the communications between him and Hadassah Ein Kerem staff were in this vein.”