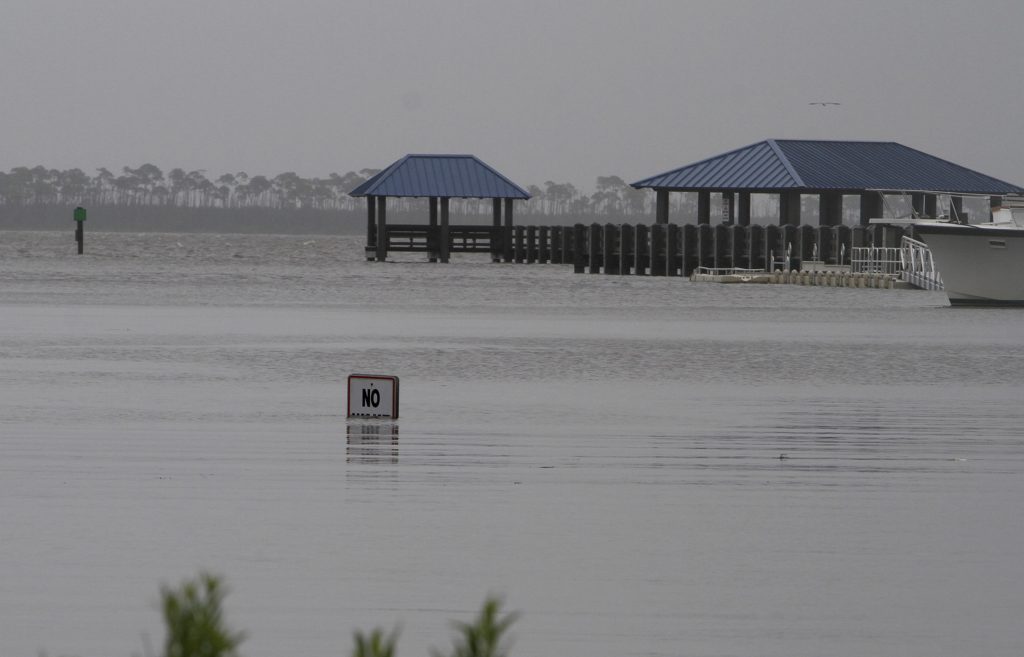 Flash-flood warnings covered parts of the Florida Panhandle Wednesday as Tropical Storm Cindy weakened slightly on its trek toward the Gulf Coast.

In their 11 a.m. EDT advisory, National Hurricane Center forecasters said Cindy was located about 180 miles southeast of Galveston, Texas, and had weakened slightly, with sustained winds of 50 mph. The storm was headed northwest at 10 mph. A tropical storm warning that had extended from the Florida border west to Texas was scaled back, stretching from the mouth of the Mississippi River to just west of Galveston.

While the storm track puts a landfall along the Texas and Louisiana border, forecasters said impacts could be widespread and urged the public not to focus on the track, especially since Cindy is generating heavy rain north and east of its center. Tropical storm force winds extend more than 400 miles.

Cindy is expected to make landfall near the Texas and Louisiana border later Wednesday and move inland Thursday. Dry air will likely keep the storm from strengthening Wednesday, forecasters said. It’s expected to weaken further as it moves over land.

Heavy rain and the possibility of dangerous flooding in flood-prone areas pose the largest threat. Storm surges of up to three feet are also possible. In New Orleans, officials braced for flooding as waters in Lake Pontchartrain rose. Forecasters also warned that tornadoes are possible.

Across the Panhandle, flooding closed roads and beaches as Cindy pounded the shore. Santa Rosa County reported flooding at the south end of the county that made some roads impassable. A tornado warning reached east to Pensacola. Even as the storm weakens on its inland track, forecasters warned it’s likely to continue generating heavy rain over the central and eastern Gulf.

This week’s dual tropical storms, first Bret and now Cindy, marked a couple of firsts in the records books: the rare appearance of two storms so early in the year. University of Miami hurricane researcher Brian McNoldy said they are the first dueling storms to appear in the Atlantic before July in 49 years. The storms also stepped outside hurricane averages: Storms starting with the letter C typically haven’t appeared until mid-August, putting it about eight weeks ahead of schedule, he said.

Last month, hurricane forecasters called for a busy season, predicting that between 11 and 17 named storms will appear before the season officially ends in November. Between five and nine will be hurricanes and two to four are expected to be major storms with winds topping 111 mph.