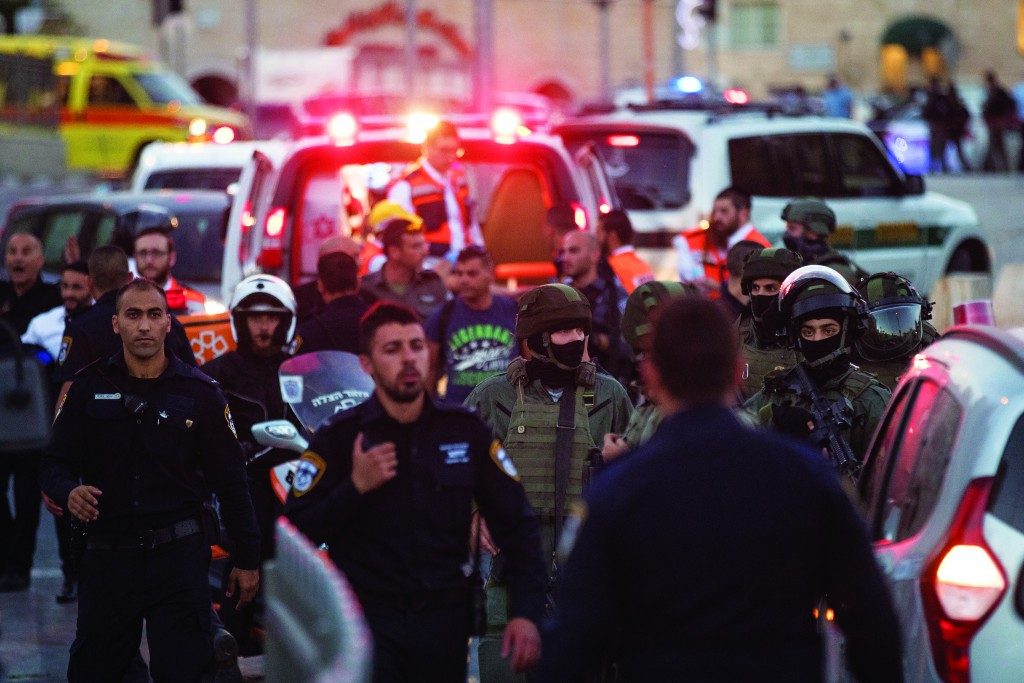 When the BBC apologizes for its slanted coverage of Israel it’s not out of remorse, but out of recognition that it’s gone too far, even for the BBC.

The latest example is the headline it gave the story of three terrorists, armed with knives and guns, who came to Yerushalayim Friday evening to massacre soldiers and civilians just outside the Old City. One of the three stabbed to death Hadas Malka, Hy”d, a 23-year-old Border Policewoman, who fought him off as he tried to grab her weapon.

In the fracas, he and his two fellow terrorists were killed by Israeli security forces. The BBC headline? “Three Palestinians Killed After Deadly Stabbing in Jerusalem.”

“We accept that our original headline did not appropriately reflect the nature of the events and subsequently changed it,” the BBC said in a statement. “Whilst there was no intention to mislead our audiences, we regret any offense caused.”

The apology can’t be accepted at face value, for two reasons. One, it only came after a storm of criticism. Not only did Prime Minister Binyamin Netanyahu personally instruct Foreign Ministry Director General Yuval Rotem to register a strong protest, but President Donald Trump’s son, Donald Jr., expressed understandable outrage.

Referring to the original headline, “Three Palestinians Killed…,” he tweeted: “You mean after they stabbed a female Israeli police officer to death… right? This is as close to being misleading as possible. Need a new term for this nonsense. Sort of the opposite of victim blaming. How about Culprit Coddling? Maybe Criminal Cozying? Thoughts???”

Second, the headline is nothing new. It’s a pattern with the BBC, part of a corporate culture that goes back decades. Just last year, when a terrorist murdered two people outside the Old City of Yerushalayim and was neutralized by security forces, the BBC’s headline was: “Palestinian Shot Dead After Jerusalem Attack Kills Two.” It later changed it, to “Jerusalem: Palestinian Kills Two Israelis in Old City,” but only after being read the riot act by the Government Press Office.

(The BBC doesn’t like to use the “t” word. Even in its corrections, in this week’s scandalous headline and last year’s, you don’t find the word “terrorist.” “Palestinian” and “terrorist” aren’t said in the same breath. It’s also interesting to note that since the beginning of the year, the BBC has reported 0.3 percent of the total terror attacks and none of the missile strikes.)

Douglas Davis, a journalist in Britain, noted that on Sept. 11, when the Twin Towers were coming down, the BBC was hosting Arab studio analysts who insisted that it was racist to assume that Arabs or even Muslims were responsible. Instead, they offered, it was the Mossad, because such an event “played into Israeli hands.”

Furthermore, even if Arabs or Muslims had flown the planes, it was America’s fault for backing Israel at the insistence of the powerful Jewish lobby. In ignoring the “occupation” and “settlement” building, America had shown contempt for Arab sensibilities. In the circumstances, could anyone blame the Arabs for lashing out at the Americans?

This kind of conspiracy lunacy passed for serious news analysis on the BBC. “In the Newspeak of the BBC,” Davis wrote, “there was a direct, causal link between the attack on America and the occupation of the West Bank.”

In 2004, the Israeli government accused the BBC’s Middle East correspondent, Orla Guerin, of anti-Semitism and “total identification with the goals and methods of the Palestinian terror groups” in its reporting on a 16-year-old would-be suicide bomber.

Obviously, the BBC isn’t the only news service that slants its coverage of Israel. The Associated Press has been accused by one of its own reporters of terrible bias. “The construction of 100 apartments in a Jewish settlement is always news,” wrote Matti Friedman, a reporter and editor in AP’s Yerushalayim bureau from 2006 to 2011. “The smuggling of 100 rockets into Gaza by Hamas is with rare exceptions not news at all.”

When the United Nations released the controversial Goldstone report on the Gaza fighting in 2009, the AP gave it dozens of articles even though many of its harshest assertions were unproven. The head of B’Tselem told Friedman that Goldstone’s claims that the IDF deliberately targeted civilians were “a reach given the facts.” Goldstone himself later admitted that “if I had known then what I know now the Goldstone Report would have been a different report.”

But that didn’t stop AP from using the report to slam Israel and, at the same time, depict Hamas in a favorable light, exactly as ordered by the terrorists in Gaza.

In the final analysis, Israel has, baruch Hashem, survived the lies of the BBC, AP and all the rest. Unfortunately, though, the biased, fawning coverage of terror groups led them to believe they could get away with murder, not just in Israel but in London, home of the BBC, and around the world.