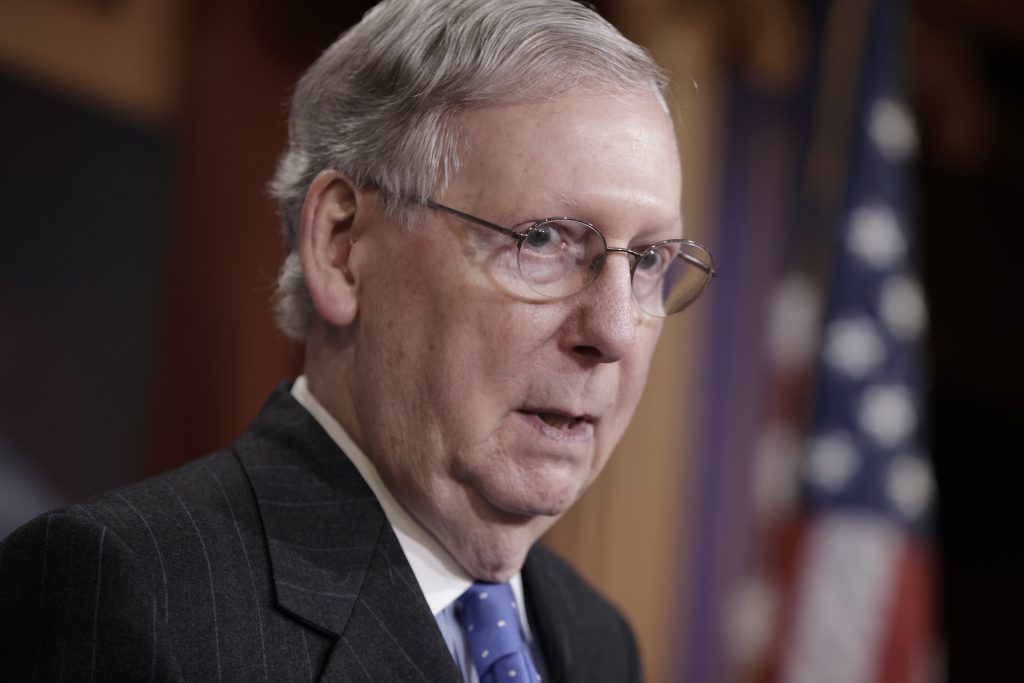 “The Senate will soon have a chance to turn the page on this failed law,” said the Kentucky Republican. He said GOP senators have had “many productive discussions” on the measure and added, “We have to act, and we are.”

On MSNBC, Sen. Bob Corker, R-Tenn., said GOP senators will be briefed on the emerging bill Wednesday and he expects to see the legislation the next day, about a week before a vote occurs.

Even so, lobbyists said final decisions had yet to be made on some issues.

Lacking the votes to stop it, Democrats are criticizing the still-evolving bill as a stealthy measure that GOP leaders want to rush through the chamber before anyone knows what’s really in it.

Democrats concede that Obama’s prized statute needs changes to shore up some regional markets where insurers are losing money. But they praise its impact on providing coverage to around 20 million additional people and forcing insurers to provide more generous benefits.

They held the Senate floor for several hours late Monday and promised to use procedural tactics to slow the Senate’s work in an effort to focus attention on the Republican effort. They also forced McConnell to turn aside requests to require Senate committees to debate and vote on the measure, a step in the legislative process that GOP leaders have forgone.

“The combination of secrecy and speed are a toxic recipe,” said Sen. Richard Blumenthal, D-Conn.

Sen. Catherine Cortez Masto, D-Nev., called the secrecy of the GOP effort “an insult to the American people.”

Democrats’ largely symbolic effort was likely to have little or no impact on how McConnell handles the measure, which he’d like the Senate to approve by the end of next week. But they were hoping it would have at least two effects — scare off Republicans wavering over whether to back the measure, and show liberal activists that Democrats are aggressively trying to thwart the legislation, even though they lack the votes to derail it.

McConnell is using closed-door meetings among Republicans to write the bill. In these sessions lawmakers are trying to resolve internal disputes over how to reduce the insurance coverage standards that Obama’s law requires, cut the Medicaid health-care program for the poor and eliminate taxes Obama levied on higher earners and the medical industry.

Democrats are increasingly worried that McConnell will jam the bill through the Senate with little debate, limiting their chance to scrutinize the bill and whip up opposition against it.

Under special rules, each party will have just 10 hours of debate on the measure before the chamber begins a vote-a-rama, a series of quick amendment votes with little discussion. Democrats have even suggested a scenario in which Senate debate begins on a preliminary version of the GOP measure and McConnell offers the final package as a late amendment, giving Democrats little or no time to criticize it.

As Democrats made a series of motions that McConnell turned aside, Minority Leader Chuck Schumer, D-N.Y., twice asked the GOP leader to ensure Democrats will have more than 10 hours to study and debate the bill before the vote.

“I think we’ll have ample opportunity to read and amend the bill,” McConnell answered each time.

The procedures McConnell will use will let Senate Republicans pass the bill as long as no more than two of the 52 GOP senators oppose it. It remains uncertain McConnell will be able to do that, but both parties respect his ability to keep his party unified and count votes.

Democrats are trying to capitalize on the secrecy and contrast it with the numerous committee meetings and votes that produced Obama’s 2010 statute. They say they will slow work on bills by refusing to let the Senate bypass time-consuming procedural steps, which it customarily does on most legislation.