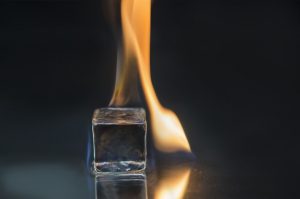 Flammable ice. Sounds like an oxymoron, doesn’t it? But if you can somehow manage to trap a highly flammable gas inside of frozen water, then that’s exactly what you get. And, as it turns out, the world’s oceans (way down at the bottom) are loaded with this stuff. This is not even new news. Already in the 1960s, flammable ice — or methane hydrates, as they are scientifically known — were discovered in Russia’s north. This stuff also pops up a lot on dry land under areas of permafrost. Bacterial activity underneath the Earth’s crust causes methane to seep upward, and a lot of it gets caught inside water as the latter is freezing into ice.

The reason flammable ice made headlines recently has to do with the fact that numerous countries have been trying to figure out how to safely and efficiently extract the methane — which can be used as fuel — only over the past 10 to 15 years. And China, according to a May 19 BBC article, claims that it has made a major breakthrough in this process — a breakthrough that, if as claimed, puts it way ahead of the game. That is quite significant as many believe that flammable ice holds the world’s future for carbon-based fuel. Still, scientists aver that it’s unlikely that any type of broad-level fuel extraction from flammable ice will be taking place before 2025. Scientists emphasize that it is crucial to figure out a way of extracting the methane without letting any of it escape into the atmosphere. If it would, the disastrous consequences for global warming could be far worse, scientists warn, than what has been caused by CO2.

The Chofetz Chaim is quoted as saying that in Shamayim all the divisions familiar to us fall away. No regard is given to whether one was Ashkenazi, Sephardi, chassidish, litvish, and so on. In Shamayim, the Chofetz Chaim explained, there are five types of Jews: kochadike Yidden — boiling hot Jews; vareme Yidden — warm Jews; lebleche Yidden — room-temperature Jews; kalte Yidden — cold Jews; and derfroirene Yidden — frozen Jews. Becoming passionate — to be on fire with one’s Yiddishkeit, with one’s connection to Hakadosh Baruch Hu — is something we all aspire to. Rachmana liba ba’ei — Hashem wants the engagement of our hearts. To be ignited with the brilliant flame of Torah and yiras Shamayim is the greatest brachah one can hope for. Indeed, many of us perhaps look on with envy at our brothers and sisters who are so passionate about their davening, their learning, their chessed — their avodas Hashem.

Nobody wants to be a kalte Yid, cold and unfeeling about Yiddishkeit. And certainly not a derfroirene Yid! But the problem is — perhaps especially in today’s world of mass sensory overload — that many of us often feel just that way. It can be awfully discouraging, can’t it? But all hope is not lost.

I once heard or read a story — it was many years ago and I cannot recall from whom I heard it or in what book I read it — about a man who went to visit the Kosel. He wanted to daven with fervor. With a bren. Perhaps he needed a yeshuah. That detail I also do not recall. But what I do remember of the story, though, is that he wanted to daven, to really daven. So he took out a sefer Tehillim and began from the beginning. He was hoping that the age-old, timeless words of Dovid Hamelech would arouse the fire in his soul. Alas, he read through chapter after chapter and not even a single tear fell from his dry eyes. As he was completing the penultimate kapitel and beginning the final one, he felt resigned to the fact that it must be that he simply doesn’t have it in him to express a true tefillah. And that was when the dam burst open. Suddenly, inexplicably, he began sobbing torrents of tears as he recited the final perek of Tehillim. The upshot of the story — I recall clearly — was that in sefer Tehillim there’s something for everyone. It’s just a matter of finding your place.

I think, though, that there is another lesson in the story which brings us back to the point at hand. That Yid, sitting by the Kosel with a sefer Tehillim in hand, wanted nothing more than to have his neshamah burst forth in true, heartfelt tefillah. Ober s’geit nisht — it wasn’t going! Nothing was happening! He must have felt like he was doomed to be branded a “frozen Jew” for all eternity, chas v’shalom. And then, completely unexpectedly, the latent flame that was trapped inside ignited with a tremendous force. He thought he was a rock-hard, frozen Jew through and through. Really, though, he was flammable ice. The powerful flame inside was being held in — protected and kept safe, perhaps — by the outer, frozen veneer. All he needed was to get close enough to the catalyst that would bring about the desired combustion. Perhaps, perhaps that is what the Chofetz Chaim meant. Even those Yidden that seem cold or frozen, it’s not that they are a useless block of solid ice through and through, chalilah, but that their passion, their fire, is but concealed. So even if you feel cold from time to time, remember that that is only the outside temperature. Keep on plugging away and eventually your neshamah will find that catalyst to ignite its brilliant flame.