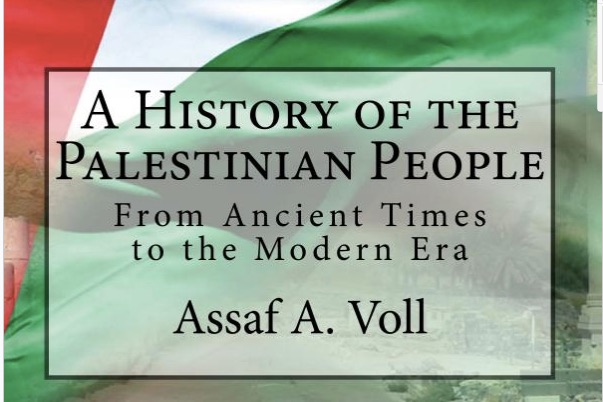 An Israeli writer has authored what he claims is the most extensive research into the history of the Palestinian people – with discussions of their ancient traditions, their roots and their current struggle in the “diaspora.” The book, offered for sale in numerous venues – including Amazon – has garnered many positive reviews, with readers thanking the author, Assaf Voll, for “a magnificent contribution to historical understanding of a complicated situation.”

The book, we may have neglected to mention, is 120 pages long – and all its pages are blank.

Titled “A History of the Palestinian People: From Ancient Times to the Modern Era,” the book contains a short introduction to Palestinian history – and stops there. “This book is the fruit of many years of research, during which thousands of sources have been meticulously reviewed in libraries and archives worldwide,” according to the book’s description on Amazon. “It is no doubt the most comprehensive and extensive review of some 3,000 years of Palestinian history, with emphasis on the Palestinian people’s unique contribution to the world and to humanity.”

Voll is a columnist for numerous Israeli publications, and is involved in the public relations and advertising business. He is also a history expert, and lectures at Haifa University as an external expert. The book is selling for $8.88 on Amazon (a Hebrew version is available for free on Voll’s own site), and Voll is offering to send a copy of the book as a gift to select individuals like Arab MK Ahmed Tibi and Meretz party head Zehava Gal-on, if anyone cares to pay for a copy of their book.

It may seem like a joke, but Voll is quite serious about the project. “Palestinian history is a deep and engrossing subject, going back to the early days of civilization,” he said in a press release. “This book discusses the Palestinian nation in its previous kingdoms, its unique language and its culture over thousands of years. For some reason, nothing has been written about it until now. I believe that this book will shine a light on a fascinating but until now hidden chapter in the history of the world.”

Readers who left reviews for the book agreed. “Each page details more and more and backs up the claims these former Egyptians, Jordanians and Lebanese have to the Land of Israel. Read the Chapter on Palestinian contributions to Science and World Peace – astounding that more of this has not made it into publication before this amazing book,” said one reviewer, with another saying that “Truly, this is the final word on the Palestine-Israel conflict and everything you would ever need to know to understand Palestinian claims to the land between the river and the sea.”