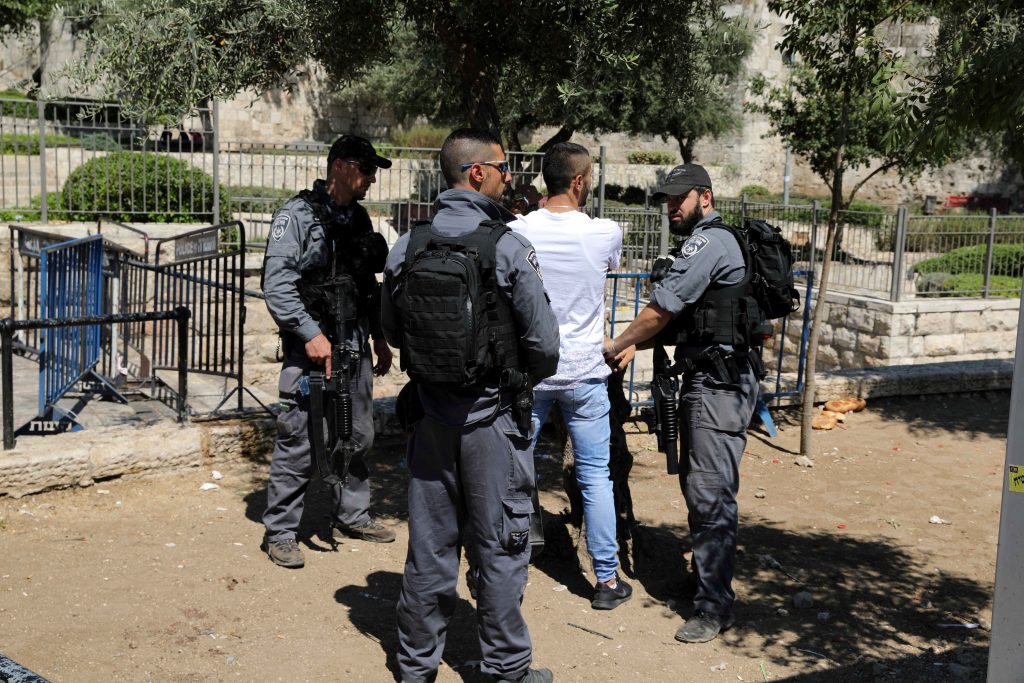 In the wake of the murder of Border Guard officer Hadas Malka, Hy”d, hundreds of families of terror victims have written to Yerushalayim Mayor Nir Barkat seeking to have Sultan Suleiman Street renamed after the fallen officer.

Among the actions that IDF forces took in response to the terror attack was sealing Dir Abu Mashal, the Arab village northwest of Ramallah where the three terrorists – Bara Ibrahim Muhammad Saleh, 19; Adel Hassan Ahmad Anakush, 18; and Osama Ahmad Mustafa Atta, 19, organized their plot. The homes of the terrorists’ families have been mapped out, in preparation for their demolition. All permits – numbering about 250,000 – for Palestinian Authority residents to enter Israel proper were suspended Friday night. The only permits not canceled were those for Arabs to enter Har HaBayis, to visit the mosques there during the Ramadan observance. In addition, some 350 PA Arabs in Israel illegally were rounded up over Shabbos.

In addition, Netanyahu has proposed implementing a “sterile zone” in the area of the Damascus Gate (Sha’ar Shechem), with traffic and pedestrians directed to other entrances of the Old City. Many of the terror attacks in Yerushalayim in recent years have been in the area of the Gate, which is seen as a flashpoint for tension, as it abuts both Jewish and Arab neighborhoods of the city. However, security officials told Channel Two Sunday night that that solution was impractical, given the importance of the area and the square in front of the Gate for Arab commerce, traffic, etc.

According to families of terror victims, the next best thing would be to rename the street where the attack took place after the murdered officer. Army Radio quoted Devora Gonen, who is representing hundreds of families in this matter, as saying that the families sent a letter to Barkat laying out their request. The letter will be attached to a petition which will be distributed on social media. The families hope to get tens of thousands of signatures, if not more.

Sultan Suleiman Street is one of the oldest thoroughfares in Yerushalayim, named for the Turkish Sultan who rebuilt the walls of the Old City. As part of the municipal boundaries of Yerushalayim, however, the official name of the street is determined by a committee on street, park and school names. That committee is set to meet in about three weeks. Officials of the Im Tirzu antiterror organization will represent the families in front of the committee, and will seek to have the name of the street changed, Army Radio said.