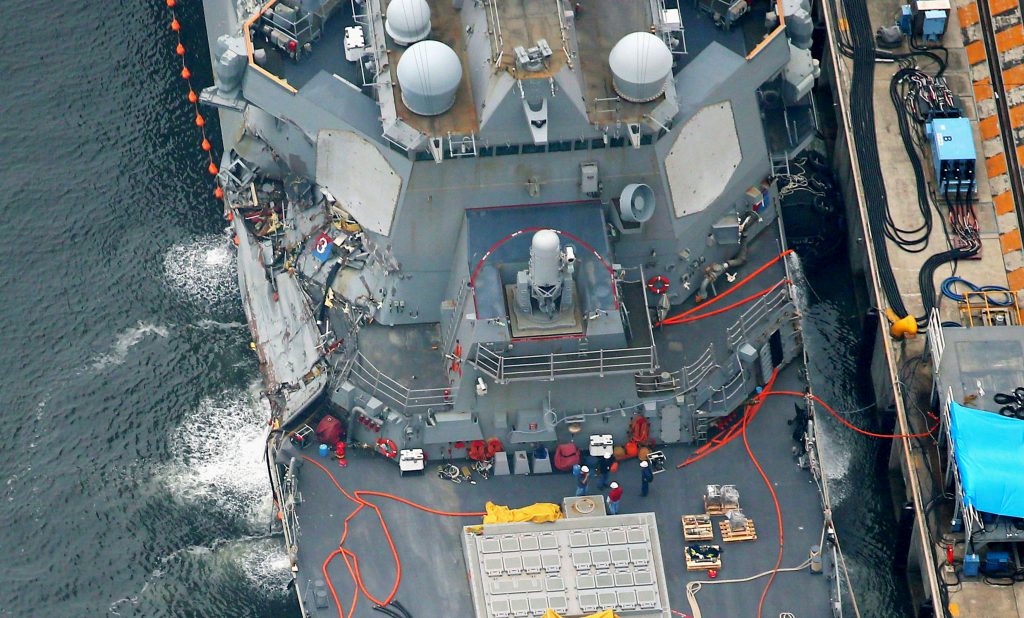 A U.S. Coast Guard investigation team arrived in Japan Monday to start piecing together the sequence of events that led to the weekend collision of a Navy destroyer and a fully loaded container ship four times its size.

There are now multiple investigations into the accident, from both the U.S. Navy and Coast Guard as well as Japan’s Coast Guard and its Transport Safety Board.

“The Coast Guard will be taking the lead in the marine casualty investigation,” said Lt. Scott Carr, spokesman for the American investigation team.

The investigators will be questioning the crew of the USS Fitzgerald, the Aegis guided missile destroyer that collided with the ACX Crystal, a Philippine-flagged container ship, just off the Izu peninsula. The crash site was south of the Fitzgerald’s home port, the Seventh Fleet base at Yokosuka, and south of Tokyo, where the Crystal was headed.

Seven sailors died as a result of the collision, which severely damaged the berthing compartments where they were sleeping, resulting in flooding. The ship’s captain was also injured and evacuated by hospital to the naval base hospital at Yokosuka.

The 20 crew members on the container ship, chartered by the Japanese shipping company Nippon Yusen, were reported unharmed.

“We are working to gain access to the crew of the Philippine-flagged vessel but it’s taking a little bit of time to make that happen,” Carr said.

Marine tracking data showed the Crystal proceeding on a westward course toward Tokyo, but shortly after 1:30 a.m. it performed a sudden U-turn and returned back to where it had been at 1:30.

“We are fully cooperating with the investigation,” said Manami Meguro, a spokeswoman for Nippon Yusen.

The ship unloaded some of its cargo at Tokyo then continued to Yokohama, where it offloaded the rest of the containers. After that, it will likely be taken out of service while the investigation takes place, the Asahi Shimbun reported.

Both Nippon Yusen and the ship’s owner, Kobe-based Dainichi-Invest Corp., declined to confirm the report.

Japanese investigators boarded the container ship over the weekend and interviewed the captain and crew, according to other local news reports.

“In general, when two vessels collide, then both would be subject to investigation and suspicions of endangering marine traffic through professional negligence could apply to both vessels,” said Yoshihito Nakamura, a spokesman for the Japanese Coast Guard.

Three investigators for Japan’s Transport Safety Board had inspected the container ship inside and out, said spokeswoman Yuko Watanabe. It was not clear when or if Japanese investigators would be able to check the Fitzgerald or talk to its crew, she said.

The path of the Fitzgerald before the collision is not clear because military ships do not transmit location data like commercial vessels.

The Fitzgerald is part of the same fleet as the USS Ronald Reagan aircraft carrier, also based at Yokosuka. The Reagan carrier group, as well as other groups, have been particularly active in the area around the Korean Peninsula in recent months because of heightened tensions with North Korea. However, the Fitzgerald was operating independently of the Reagan at the time of the collision.