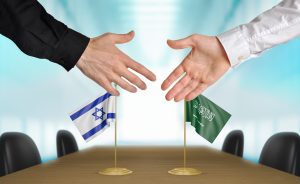 The much-touted behind-the-scenes contacts between Israel and Saudi Arabia may soon surface in the form of economic arrangements, the London Sunday Times has reported.

Citing Arab and American sources, the British daily described it as “a dramatic move that would put [Israel] on a path to normal relations with the bastion of Sunni Islam…”

The paper said “the links would start small: allowing Israeli businesses to operate in the Gulf, for example, and letting El Al, the national airline, fly over Saudi airspace.”

Officials in Saudi Arabia denied the report, however, saying that the sources cited in it are American officials, dismissing it as wishful thinking on the part of the Americans, who are eager to show results from President Donald Trump’s recent visit to Riyadh.

Until now, the Saudis have insisted that any normalization of relations with Israel could only proceed after progress toward peace with the Palestinians. But according to the report, Trump representative Jared Kushner has been discussing an “outside-in” approach with Saudi Deputy Crown Prince Mohammed bin Salman, which would upend conventional thinking. This approach calls for Gulf states agreeing to modest improvements in relations with Israel ahead of a peace deal, to be followed by full recognition of Israel as the latter unfolds.

This development has reportedly caused tension between Kushner and Mideast envoy Jason Greenblatt, who has been treading the well-worn path of trying to woo the Israelis and Palestinians back to the peace table first.

The Times also speculated that “the possibility of closer ties with Israel would partly explain why Saudi Arabia and its allies have imposed a sweeping blockade on Qatar, in an effort to force the Gulf state to drop its support for Hamas.”