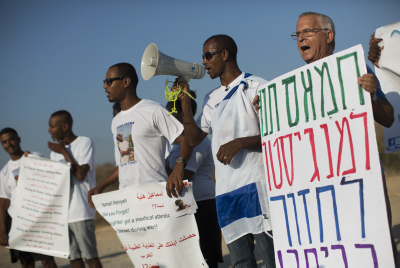 The IDF on Motzoei Shabbos showed the family of missing IDF soldier Ebra (Avraham) Mengistu footage of his crossing into Gaza in 2014. The video, according to the army, corroborates its view that Mengistu willingly crossed into Gaza.

Pressure has been building on the government in recent weeks to do something to gain the release of Mengistu, who went missing after Operation Protective Edge. Protests have been taking place in Tel Aviv nightly for the past few weeks, demanding that the government release information it has on Mengistu’s whereabouts. The existence of the footage was known to the family, and they asked the IDF for permission to view it months ago. That request was finally approved last week, and on Motzoei Shabbos top IDF and Defense Ministry officials viewed the footage together with members of the Mengistu family.

Mengistu, 30, is said to be suffering from mental problems. He crossed into Gaza on September 7, 2014. He is believed by his family to be alive and held by Hamas, although there has been no word from him since his disappearance.

In a statement, Mengistu’s mother, Agranash, said that she would “prefer to see a recording of him coming home. My son has been dealing with mental deficiencies, and we worry about him all the time. The fact that we have seen the footage does not excuse the state from acting to bring Ebra (Avraham) home.” In a statement, the IDF spokesperson said that the army “will continue to do everything possible to bring all missing and imprisoned IDF soldiers back to their families.”