Dollar Comeback Seen in Near Term 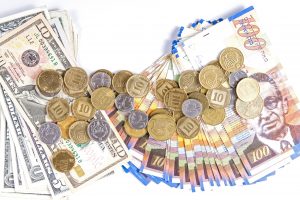 Even if the Bank of Israel does not resume its big foreign-currency buys, the relative strength of the shekel against the U.S. dollar is likely to decline, according to a monetary forecast published Sunday.

The reason, according to economists with the Union Bank of Israel, is the expectation of a general upswing in the dollar due to a coming interest rate hike in the U.S. and the relative robustness of the U.S. economy.

In their weekly foreign-currency survey, the UBI explained: “The shekel is affected by three principal factors: oil and gas transactions, various exits, and strong growth. These three factors have recently strengthened the shekel against the dollar, but in the long term, this gap is likely to narrow, due to both the anticipated interest rate raises in the U.S. in comparison with Israel and the difference in inflation rates and the targets for interest rate increases set by the Bank of Israel and the U.S. Federal Reserve Board.”

That is for the near future. Currently, the shekel continues its months-long surge. As of late Sunday, the exchange rate was NIS 3.5124/$.