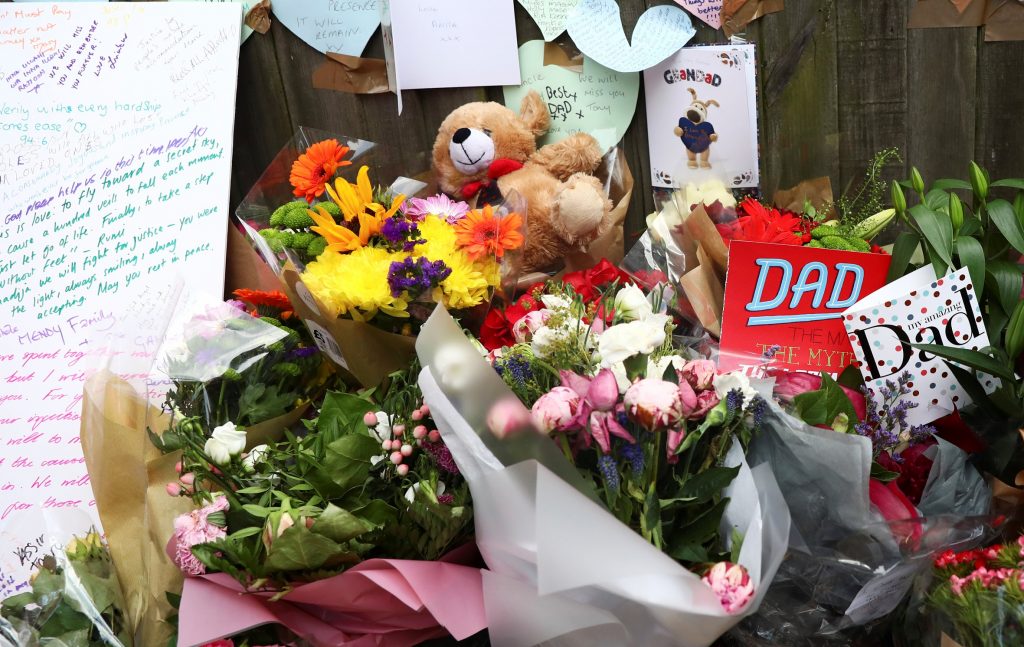 The new exterior cladding used in a renovation on Grenfell Tower may have been banned under U.K. building regulations, two British ministers said Sunday as police continued their investigation into the London fire that killed at least 58 people.

Trade Minister Greg Hands said the government is carrying out an “urgent inspection” of the roughly 2,500 similar tower blocks across Britain to assess their safety.

Experts believe the exterior cladding, which contained insulation, helped spread the flames quickly up the outside of the public housing tower early Wednesday morning. Some said they had never seen a building fire advance so quickly. The 24-story tower that once housed up to 600 people in 120 apartments is now a charred ruin.

Hands and Treasury chief Philip Hammond said in separate media appearances that the cladding used on Grenfell seems to be prohibited by British regulations. Hands cautioned that officials don’t yet have exact details about the renovation that ended just last year.

“My understanding is that the cladding that was reported wasn’t in accordance with U.K. building regulations,” Hands told Sky News. “We need to find out precisely what cladding was used and how it was attached.”

Labour Party lawmaker David Lammy demanded the government and police immediately seize all documents relating to Grenfell’s renovation to prevent the destruction of evidence that could show criminal wrongdoing.

“The prime minister needs to act immediately to ensure that all evidence is protected so that everyone culpable for what happened at Grenfell Tower is held to account and feels the full force of the law,” Lammy said.

He said all records — including emails, minutes of meetings, correspondence with contractors, safety assessments, specifications and reports — must be kept intact.

“When the truth comes out about this tragedy, we may find that there is blood on the hands of a number of organizations,” Lammy said.

London Mayor Sadiq Khan said Sunday after attending a church service several blocks from the tower that the fatal blaze was entirely preventable.

Frustration has been mounting in recent days as information about those still missing in the blaze has been scanty and efforts to find temporary housing for the hundreds of now-homeless tower residents have faltered.

British Prime Minister Theresa May, criticized shortly after the blaze for failing to meet with victims, says the public inquiry looking into the tragedy will report directly to her. She also says she will receive daily reports from the stricken neighborhood.

In addition, British health authorities will provide long-term bereavement counseling for those who lost loved ones in the tragedy. Counselors are already working with 52 families.

British officials say they are helping the Syrian family of the first officially confirmed victim of the London tower blaze to come to Britain. The Home Office says it will make arrangements for the family of Mohammad Alhajali to “travel to the U.K. in these terribly sad circumstances.”

His family said that Alhajali “came to the U.K. because he had ambitions and aims for his life and for his family.”

The 23-year-old Alhajali is the only victim of the Grenfell Tower fire to be officially named. Police and fire experts have said the fire was so intense that the process of identifying human remains will take weeks, if not months — and some victims may never be found.

Police say at least 58 people are either confirmed or presumed dead, with the figure likely to rise in coming days.

Officials are using dental records, fingerprints and DNA samples to try and positively identify victims. They say they will also use visual elements like tattoos, scars and medical implants in the painstaking process.

Sixteen bodies have been taken to a mortuary for examination.