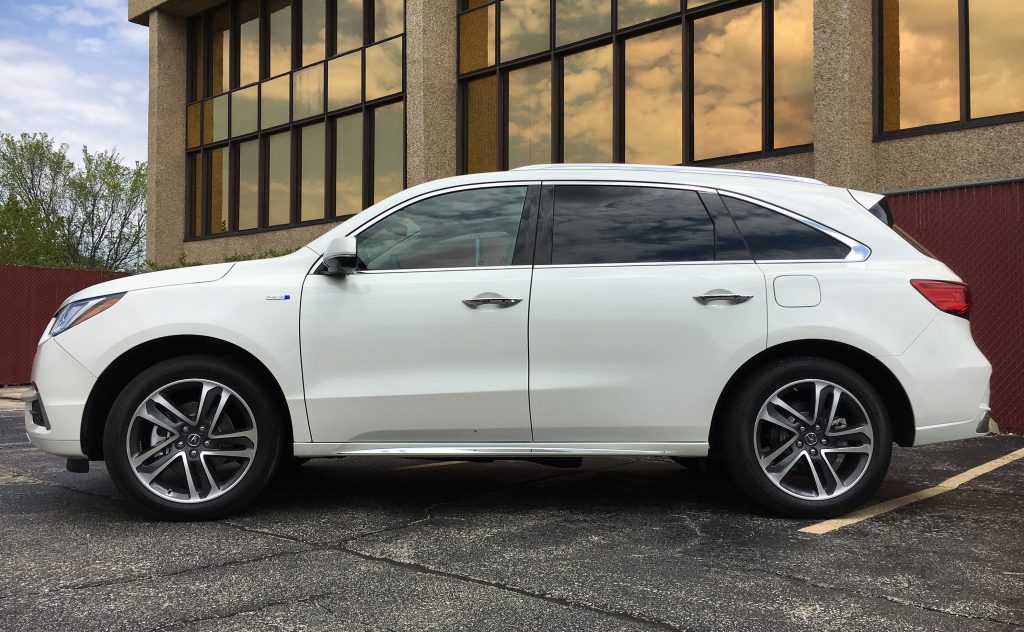 The last time I remember being impressed with Acura was my dad’s Acura Legend in the late ’80s. Recently, the ILX felt like a gussied up Honda Civic and the RDX drifted into that great homogenous pool known as the compact crossover. But the 2017 Acura MDX Sport Hybrid earns the esteem — and premium — accorded to Honda’s luxury brand.

Though the RDX had its best-selling year in 2016, the MDX led the brand and affirmed Acura’s claim as the best-selling luxury three-row crossover, making it the most important car in the lineup. The Sport Hybrid makes the MDX even better.

The Acura MDX was known for having a smooth and quiet ride, and the hybrid seems even more chill. It’s the smoothest hybrid we’ve driven, with no noticeable transition of power from all-electric mode at low speed and light acceleration to hybrid engine and motor power at moderate speed. If it weren’t for the power flow monitor on the top screen, it might not be noticed at all.

That seamless refinement comes from the three-electric-motor system first used in the RLX hybrid sedan and NSX supercar. Acura’s first hybrid SUV, the MDX uses a motor built into the seven-speed dual clutch transmission to supplement the 3-liter V-6 engine to boost output to the front wheels. Between the rear wheels is a twin-motor unit that acts as a differential to give power to the rear wheels. Total horsepower jumps from 290 in the gas model to 321 in the AWD hybrid. That rear-mounted position provides better weight balance between the axles for more spirited performance and better control.

It’s still a heavy car, coming in at just under 4,500 pounds (the AWD MDX is 4,215). The hybrid element of its name should be emphasized more than the sport. And there’s nothing wrong with that. Both front and rear motors recapture energy when coasting to power the batteries, and the rear motor unit is automatically decoupled in certain situations, such as highway cruising, to improve efficiency.

It’s all very smart, and like most smart, good things it’s noticeable only upon investigation. The 1.3-kWh lithium ion battery pack is mounted under the floor near the center of the car, lowering the center of gravity by an inch while maintaining the same ground clearance as the gas model. It has virtually the same cargo volume as the regular MDX, which is unusual for a hybrid and brilliant for a family vehicle.

We averaged over 27 mpg in our week with the trimmed-out tester, which is a 5 mpg (or 23 percent) more than the gas model. And it costs only $1,500 more than the AWD V-6 engine with the same packages. Averaging 15,000 miles a year with gas at $2.50/gallon, we’d recoup the hybrid upcharge in less than five years.

Inside, the MDX Sport Hybrid has exclusive trim in the two highest package options. The tester had the most expensive Advance package, with wood accents between the soft black dash and the lower cream-colored parts that match the leather seats. The Advance package includes a six-seat configuration with the midrow captain’s chairs separated by a storage console with cup holder. Buttons and levers make getting in and out of the rear seats easy, but this is no place for teens or adults.

The low roofline with the third row over the rear axle and its motor components means there is absolutely no headroom. At 5-foot-9, my head was against the roof even in a slouch. Slide the midrow seat back and I’m eating my knees. The regular MDX isn’t much roomier. Up in the cockpit, the insistence on using a two-screen display takes away from the otherwise elegant interior finish. Two screens are double the annoyance. The higher one recessed in the dash is for navigation and backup camera, while the lower one is a touch screen to control the top or for audio. Combining the two small screens into one larger screen like Volvo XC90 would really improve the center stack and overall integration.

Like Honda, Acura’s advanced safety technology — known as Acurawatch, with adaptive cruise and other stuff — is better than its convenience technology, such as navigation and voice commands. The redundant steering controls are somewhat limited to the basic instrument cluster display, which is narrow. It’s not as sharp as the rest of the car.

These are minor criticisms that could be easily remedied.

The MDX Sport Hybrid gives Acura a definitive edge over its immediate competitors, but also against the higher-price German makes that are introducing more plug-in hybrids across the board. The balance of refined finishes, a soft highway ride and good fuel economy should help keep MDX on top of the three-row luxury class and stand out like it once did.