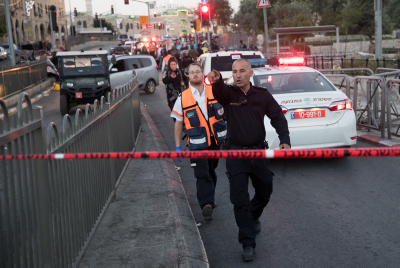 Dozens of Israelis blocked roads in Shomron on Motzoei Shabbos in response to the twin terror attacks in Yerushalayim a day earlier. The protesters blocked roads and intersections in the area of the village of Dir Abu Mashal, northwest of Ramallah, where the three terrorists plotted their attack. Border Guards and IDF soldiers broke up the protest without incident after several hours.

Murdered in the attacks was 23-year-old Border Guard officer Hadas Malka, Hy”d. Four other Israelis were wounded. The three terrorists who carried out the attack were killed by security officers. IDF forces entered the terrorists’ village and sealed it, mapping out the location of the homes of the terrorists’ families in preparation for their demolition. So far, ten arrests have been made in the village of individuals who are accused of helping to plot or carry out the attack.

In response to the attack the government has suspended all permits – numbering about 250,000 – for Palestinian Authority residents to enter Israel proper. The only permits not canceled were those for Arabs to enter Har HaBayis, to visit the mosques there during the Ramadan observance. In addition, some 350 PA Arabs in Israel illegally were rounded up over Shabbos.