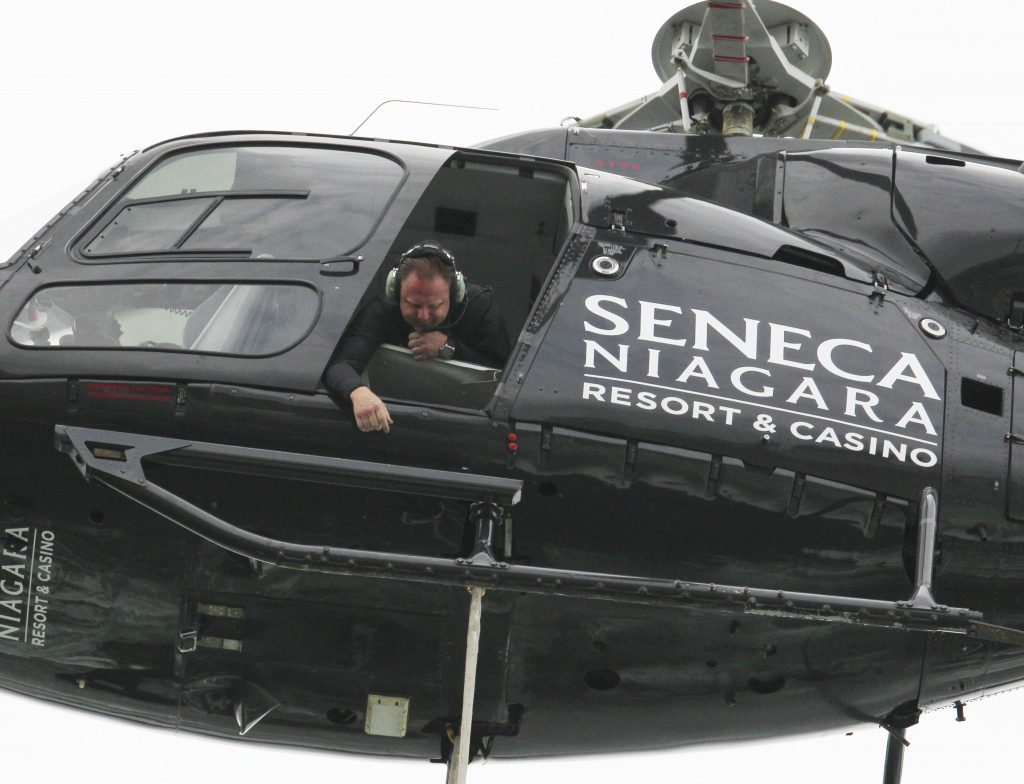 Erendira Wallenda, the aerialist wife of daredevil Nik Wallenda, successfully hung by her teeth from a helicopter over Niagara Falls on Thursday, pulling off the stunt five years to the day her husband walked a tight rope over the falls.

The 36-year-old mother of three was tethered to a hoop suspended from a helicopter 300 feet above the water. With the mist from the falls as a backdrop, Wallenda hung twice by her teeth with the use of a mouth guard.

“There are no words. It was beautiful,” she said afterward.

The Wallendas said the stunt broke a height record Nik Wallenda set in 2011 when he hung by his teeth 250 feet above Silver Dollar City in Branson, Missouri.

Erendira Wallenda said she was caught off guard by the windy conditions above the cataracts, something her husband had to deal with during his 2012 stunt.

“I respect this man so much more because it was way more windy than I thought it would be,” she said.

Pilot Paul Barth said Wallenda signaled to him to fly higher during the routine to get away from the wind. She spent about eight of the 10 minutes of the stunt hovering over the falls.

Afterward, she and her husband spoke of the attraction of the falls, which has long attracted daredevils.

“There’s something almost magical that draws you to it. It’s kind of dangerous but it’s beautiful in the same way,” she said.

County officials who helped finance the stunt hope people watching news coverage will feel the same pull. The city and Niagara County Legislature each committed $35,000 to the stunt with the goal of boosting tourism.

Scheduled for 8:30 a.m. on a weekday, Erendira Wallenda’s stunt drew nowhere near the shoulder-to-shoulder crowds of her husband’s 2012 prime-time high wire walk.