Summer Vacation? Lots of Americans Say They Can’t Afford It 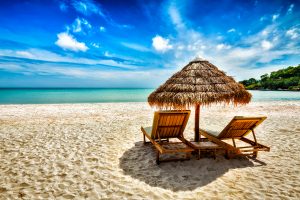 Forget frequent flier miles, last-minute getaways and even road trips. Nearly half of Americans say they won’t be taking a vacation this summer, mostly because they can’t afford it, according to a new poll by The Associated Press-NORC Center for Public Affairs Research.

The new AP-NORC survey, conducted in May, said 43 percent of Americans won’t be taking a summer vacation. The top reason for skipping a trip was the cost, cited by 49 percent of non-vacationers. Another 11 percent said they can’t take the time off from work, while 3 percent said they don’t like to be away from work.

About half of Americans living in households making less than $50,000 a year don’t plan to take any summer vacation this year, and they’re especially likely to cite costs as a reason.

Danny Aguilar of Lakewood, Colorado, says the cost is what stops him from planning a vacation. He works in information technology, but because he’s self-employed, “the income is very unknown. You don’t know what’s going to happen. You never really know what’s coming. You can’t really budget.”

Other findings from the poll:

—Not everybody wants to go away in the summer. Fifteen percent of those who are passing on a summer getaway say it’s because they already took a vacation this year or because they’ll travel some other time of year.

—Americans seem to value time over luxury when it comes to their vacations. Nearly two-thirds say they’d prefer to take a longer but less luxurious vacation over one that’s shorter but more luxurious.

Linda Dube and her sister are among those citing cost as a reason for staying home this summer. The sisters, who are retired, live in Fitchburg, Massachusetts, and usually vacation for a few days at in Connecticut. “We decided this year, instead of doing that, we’d save a little money and take a one-week staycation,” she said. They plan a day at a local mall, eating out at a “wonderful little diner in the next town” and perhaps a trip to a nearby art museum. Dube’s sister is in a wheelchair, she added, so any destination must accommodate wheelchairs.

David Kisler of Costa Mesa, California, says he can’t afford a vacation either. “I’m working three jobs to make ends meet,” said Kisler, who lost his job marketing network security in 2009. His wife works, too, but he said they’ve been dipping into savings to tackle projects around the house.

Kisler and his wife did recently drive to Mission Beach in the San Diego area to spend time with family who’d driven in from Arizona, but three days with relatives in a shared rental house is “not exactly a vacation,” he said.

More than 4 in 10 Americans say they don’t consider visiting family to be a true vacation, though about three-quarters do consider a long weekend away a vacation.

For Kisler, the weekend in a shared house with family certainly can’t compare with the week he and his wife spent a few years ago in Cabo San Lucas, Mexico, in a hotel near the beach. “That was a real vacation,” he lamented.