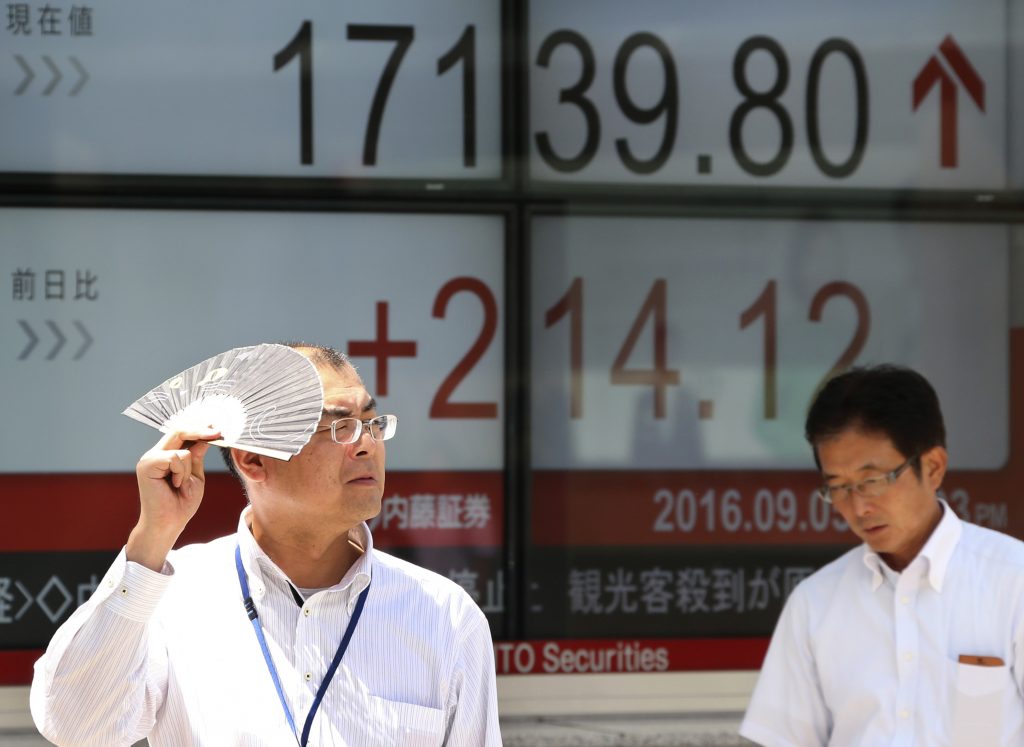 U.S. stock futures and Asian shares slid on Thursday, hit by soft U.S. economic data, a relatively hawkish Federal Reserve and a media report that President Donald Trump is being investigated by a special counsel for possible obstruction of justice.

S&P mini futures dipped as much as 0.3 percent, while MSCI’s broadest index of Asia-Pacific shares outside Japan dropped 0.7 percent, led by resource shares.

European shares were expected to get off to a tentative start, with spread-betters looking at a flat open in Germany’s DAX and a 0.1 percent fall in Britain’s FTSE.

The Federal Reserve raised interest rates as expected on Wednesday and gave a first clear outline on its plan to reduce its $4.2-trillion portfolio of bonds.

Fed Chair Janet Yellen said the process could start “relatively soon,” while projections of the Fed board members also showed they expect one more rate hike by the end of the year.

A majority of Wall Street’s top banks now expect the Fed to start reducing re-investment in bonds in September, compared to their previous median forecast of such a move in December.

Yet the Fed’s decision and confidence in continued U.S. economic growth was overshadowed by surprisingly weak data released earlier in the day.

“The Federal Reserve was a little bit more hawkish than market expectations. They are following up on their plan outlined in March even as inflation has fallen short of forecast for three months in a row,” said Tomoaki Shishido, senior economist at Nomura Securities.

Consumer prices unexpectedly fell on month in May and the annual increase in core CPI slipped to 1.7 percent, the smallest rise since May 2015, after advancing 1.9 percent in April.

Investors’ inflation expectations gauged by the spread between the 10-year inflation-linked bonds and conventional bonds fell to 1.726 percent, completely wiping out its rise since the U.S. presidential election.

Retail sales fell 0.3 percent last month – the largest fall since January 2016 and way below economists’ expectations for a 0.1 percent gain – amid declining purchases of motor vehicles and discretionary spending.

Risk sentiment was also hit by fear of more U.S. political turmoil after the Washington Post reported that President Trump is being investigated by special counsel Robert Mueller for possible obstruction of justice.

The news came just after the No. 3 Republican in the House of Representatives, Steve Scalise, was shot by a gunman angry with President Trump and other Republicans. Scalise was listed in critical condition.

The weak U.S. data had knocked the dollar and U.S. bond yields to its lowest level in seven months against a basket of currencies.

The dollar index was little changed on Thursday after sliding to as low as 96.323 on Wednesday, having shed nearly 6 percent on the year, before bouncing back a tad on the Fed’s policy tightening.

“You cannot help the impression that there is a gap between the Fed’s bullish inflation forecast and the weakness in actual data,” said Daisuke Uno, chief strategist at Sumitomo Mitsui Bank.

“The Fed seems to think the weakness is temporary. But that view will be tested in coming months,” he added.

Money market instruments such as Fed fund futures show market players see the likelihood of one more rate hike this year as less than 50 percent.

Following the Fed’s rate hike, China’s central bank left interest rates for open market operations unchanged on Thursday, unlike in March when it lifted short-term interest rates in what economists said was a bid to stave off capital outflows and further depreciation pressure on the yuan.

Analysts had been split on whether China would follow the Fed again, noting the yuan is in much better shape than a few months ago after authorities’ recent moves to flush out depreciation bets against the currency.

The yuan held stable in early trade, trading at 6.7854 per dollar in the offshore trade.

The British pound stood little changed at $1.2746 ahead of the Bank of England’s policy meeting that is widely expected to keep interest rates on hold.

Crude oil prices were listless after having slumped nearly 4 percent to their lowest close in seven months on Wednesday, on an unexpected large build in gasoline inventories.

Brent crude futures fetched $46.83 per barrel in late Asian trade, flat on the day but not far from a five-month low of $46.64 touched in early May.

Many other commodity prices are also under pressure. Thomson Reuters CRB index tumbled to 14-month lows, having fallen almost 12 percent from this year’s high hit in January.