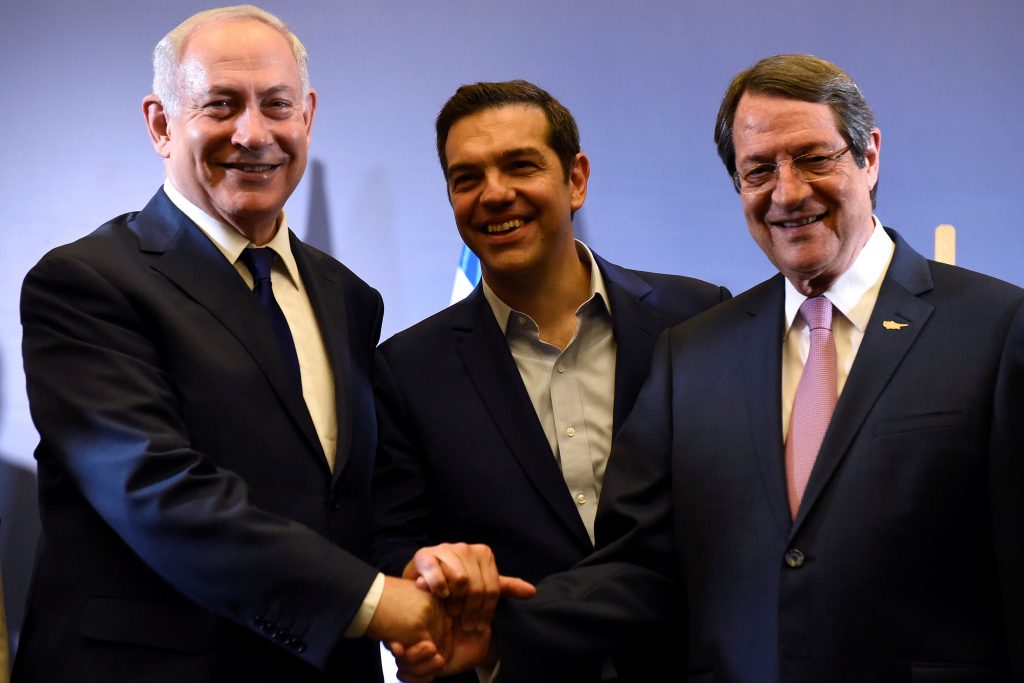 Israeli Prime Minister Binyamin Netanyahu, together with Greek Prime Minister Alexis Tsipras and Cyprus President Nicos Anastasiades, attended the unveiling of a plaque to mark the construction of a Holocaust museum in Thessaloniki on Thursday.

Tsipras noted the common history of Greece and Israel and added that the future museum would enshrine both the memory of the Holocaust and one of the most dramatic periods in the history of Thessaloniki. He remarked that the museum would also serve to impart these memories to the city’s next generation as it presented what happened.”

Netanyahu told the gathering of “two great calamities” that occurred in the city: “One is the fire of 1917 which burned this entire area and burned the Jewish quarter but didn’t destroy the Jews and the second was a greater fire, the Nazi fire. The Nazi fire destroyed about 95 percent of this extraordinary and proud Jewish community.

“There were two reasons why they didn’t destroy everyone. The first was heroism of Greeks and this was exemplified in one case that is not sufficiently well-known, the case of the Island of Zakynthos where the German commander said: ‘Give me a list of the Jews, and the Bishop and the Mayor brought a list of the Jews, their two names. They said, ‘This is our Jews. Take us.’ We honor these two great heroes among the righteous among the nations in Yad Vashem, an institution that will work with this museum.

“There’s a second reason why they survived … It is a special capacity, the grip of life that is exemplified among the survivors. One of them is Moshe Ha-Elion who is today 93, I believe. He lit a torch. Every year in Yerushalayim, in Yad Vashem, we light six torches in memory of the six million. And this year, Moshe Ha-Elion lit one of the torches. And he described how he survived the Holocaust in Thessaloniki, extraordinary heroism, unbelievable, unbelievable story. And I said to him, ‘You know, I’m going to meet my friends in the Tripartite Summit in Thessaloniki. I want you to come with me.’ And he was very, very excited, as we were, and so we agreed.

“Yesterday morning, we’re about to fly to Thessaloniki and we hear that he’s in the hospital and the doctor is treating him. He said to the doctor, ‘Please, release me. I have to go to Thessaloniki.’ And the doctor refused to do that. So I called his daughter, Rachel, and his son Eliyahu and I said, ‘Why don’t you come and represent him?’

“And if you don’t mind, Alexis, I would like them to join us in unveiling the plaque that will be in the museum to commemorate what happened her.”

Netanyahu was accompanied by his wife Sara, who, he said, “comes from a family of a Holocaust survivor. Her father is the only one of a family of almost 100 people who survived, and therefore this visit here is particularly moving for us, because Thessaloniki is a famous city in Jewish history and in Greek history and these histories were intertwined from the fourth century B.C.E. and proceeded, obviously, to have a change with the infusion of Jews after the expulsion from Spain. My father was a great scholar of the Spanish Inquisition, and he often talked to me about where did the Jews go, and many of them went here, and of course half this city — half this city — by the beginning of the 20th century was made [up] of Jewish people.”

The prime minister and his wife then attended a ceremony in which the son of a survivor of the 1953 earthquake, from the island of Cephalonia, read a letter of gratitude that which was written by survivors to the state of Israel for the assistance of the Israeli navy, whose vessels were among the first to reach the island following the earthquake.