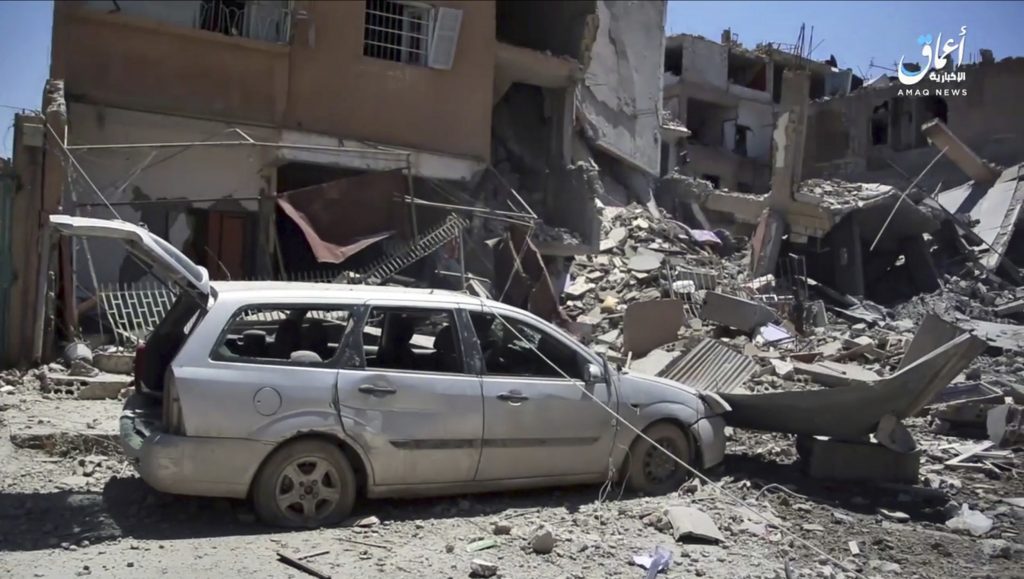 Islamic State terrorists in Raqqa are passing themselves off as civilians to try to avoid intensifying air strikes and shooting anyone caught trying to escape their Syrian bastion as U.S.-backed coalition forces close in, witnesses said.

At a camp for the displaced in the village of Ain Issa north of the city, people who arrived on Wednesday also said the air strikes supporting an assault by U.S.-backed forces had inflicted widespread destruction as the battle intensified.

United Nations war crimes investigators said the air campaign had killed at least 300 civilians in the city, captured by Islamic State in 2014 in the chaos of Syria’s civil war.

The escapees said the air strikes had flattened rows of apartment blocks along a main road, but many of them had already been abandoned by residents fleeing Islamic State’s reign of terror and the assault on the town, which began last week.

Human Rights Watch expressed concern on Wednesday about the use of incendiary white phosphorous weapons by the U.S.-led coalition, saying it endangers civilians when used in populated areas.

The coalition is backing the Syrian Democratic Forces (SDF), a group of Kurdish and Arab militias who spent months moving to surround Raqqa in northern Syria in preparation for the assault to recapture the city.

Hassan Kirfou said an airstrike hit the mosque where he works just a few hours after he closed it for the night, and two other mosques were hit.

“I saw three dead teenagers on top of each other outside the Nour mosque,” he said. “I don’t know why they shot these areas. As far as I know there were only a few Daesh (Islamic State) snipers left there.”

Much of the damage from air strikes was inflicted on Seif al-Dawla street, one of the main arteries of the town. “My uncle and two cousins were killed. Their house was destroyed,” Kirfou said.

The pressure on Islamic State, which is on the brink of losing the other centre of its self-proclaimed caliphate, the Iraqi city of Mosul, is taking a heavy toll on the group, people who arrived at Ain Issa in the last few days said.

“They have started using microphones to tell people, ‘Don’t go to the infidels, stay with Islam,’” said Abdul Razak Crais, standing near rows of white tents as people lined up for food.

“They poured gasoline on the cars of anyone who tried to escape then lit a match and burned the vehicles. I saw them haul people out of their cars and shoot them with AK-47s.”

The coalition estimates that 3,000-4,000 Islamic State fighters are holed up in Raqqa, the administrative headquarters of Islamic State, which has claimed responsibility for multiple attacks on civilians across the globe.

Residents who fled say the terrorists have been laying landmines on streets, booby trapping houses and digging tunnels in preparation for battle.

“They take over people’s houses and create big holes in their walls so they can move back and forth during fighting,” said Thaier Ibrahim.

Others at the camp said terrorists were hiding weapons and riding cars with civilians to avoid air strikes.

Paulo Pinheiro, chairman of a U.N. Commission of Inquiry, said civilians were now extremely vulnerable: “As the operation is gaining pace very rapidly, civilians are caught up in the city under the oppressive rule of ISIL, while facing extreme danger associated with movement due to excessive air strikes.”

About 10,000 civilians have fled to the SDF-run Ain Issa camp about 60 km (40 miles) north of Raqqa with hundreds more arriving each day, Medecins Sans Frontieres has said.

Conditions have deteriorated because of the grueling summer heat. But people like Mohamed Nahaf took the risk of getting shot to escape Islamic State and a battle for the city that could take months.