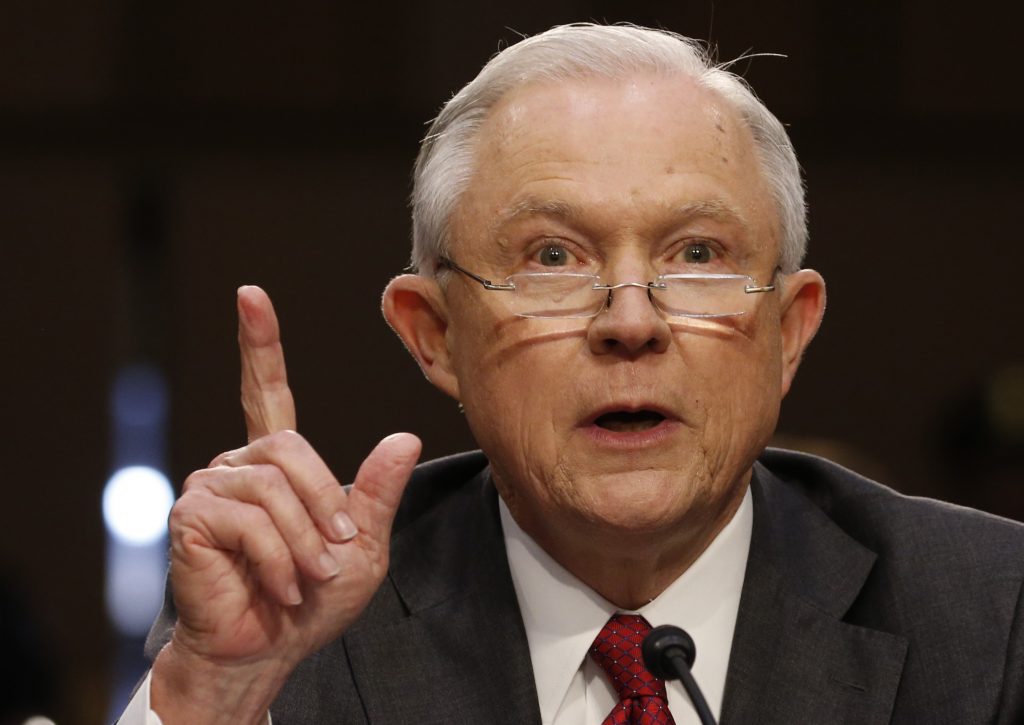 According to the U.S. intelligence community, Russia’s objectives in meddling in the 2016 election included not only hurting Hillary Clinton’s chances but also undermining “public faith in the U.S. democratic process,” “impugning the fairness of the election” and calling into question “the U.S.-led liberal democratic order.” If the spectacle of the past few months is any indication, Russian leader Vladimir Putin is certainly succeeding in these latter goals.

And here is the great irony: Those who are falsely claiming that Trump was under FBI investigation for collusion with Moscow are, in fact, the ones inadvertently colluding with Putin to undermine American democracy.

Case in point is the campaign of McCarthyite character assassination on display in the Senate Intelligence Committee hearing Tuesday. No doubt Putin was smiling as Attorney General Jeff Sessions was forced to rebut what he correctly called “appalling and detestable” accusations that he colluded with the Russians and lied to the Senate. Sessions testified that the much-vaunted “third meeting” between Sessions and the Russian ambassador at the Mayflower Hotel – which Sessions reportedly failed to disclose – did not happen, at least not beyond possible incidental contact that he doesn’t even recall.

There was a time when airing unproven allegations of coordinating with the Kremlin was seen as bad form. Now it is common practice in Washington. These kinds of false charges and innuendo directly assist Russia in its efforts to undermine public confidence in our democratic institutions. Those raising such accusations without proof are, wittingly or unwittingly, doing the Kremlin’s bidding.

For months, Democrats (aka “The Resistance”) have been spinning the false narrative that President Donald Trump was under FBI investigation to call into question the validity of his presidency. In March, Democrats used it as a pretext to argue that Trump did not have the legitimacy to fill a Supreme Court vacancy. Senate Democratic leader Charles E. Schumer (NY) declared in a floor speech that the Senate should not vote on Neil Gorsuch’s nomination because Republicans “stopped a president who wasn’t under investigation” from filling the seat. Two days later, Sen. Elizabeth Warren (D-Mass.) said the same thing, declaring, “The FBI has revealed that the sitting president of the United States is under investigation. And it raises a really, I think, important question and that is whether or not a president who is under investigation by the FBI ought to be ramming through a Supreme Court nominee that would have a lifetime appointment.”

The media gleefully echoed these false claims. The day before Comey testified, CNN blared: “In testimony, Comey will dispute President Trump’s blanket claim that he was told he wasn’t under investigation.” In fact, Comey said precisely the opposite. When Sen. James Risch (R-Idaho) asked, “While you were director, the president of the United States was not under investigation. Is that a fair statement?” Comey replied: “That’s correct.” Even then, CNN was not willing to concede its error, declaring in a so-called “correction” that “Comey does not directly dispute that Trump was told multiple times he was not under investigation.”

No, Comey did not fail to “directly dispute” it, he directly confirmed it. The CNN story – and its non-correction correction – was “fake news.”

Not only that, Comey also testified that Trump never tried to get him to stop the probe into Russia’s election meddling, which Comey explained was a separate matter from the FBI’s investigation of disgraced former national security adviser Michael Flynn. Not only did Trump not ask Comey to stop the probe, the former FBI director told Sen. Marco Rubio (R-Fla.), “He went farther than that. He said, and if some of my satellites did something wrong, it’d be good to find that out.” Rubio pressed Comey, asking whether he was testifying that Trump effectively said, “Do the Russia investigation. I hope it all comes out. I have nothing to do with anything Russia. It’d be great if it all came out, people around me were doing things that were wrong.” Comey replied, “That was the sentiment he was expressing. Yes, sir.”

Given these facts, Trump has legitimate reason to be frustrated. If you knew you were not under investigation by the FBI, but everyone was saying you were, you’d want the truth to get out. And you might be upset with an FBI director who refused to lift the “cloud” hanging over your administration by confirming that he was not investigating you.

That said, Trump has been fueling the liberal feeding frenzy with his tweetstorms taking his critics to task. If Trump knows he did nothing wrong – and if he really wants to find out whether any of his “satellites” did – he should stop talking and tweeting about the investigation, let special counsel Robert S. Mueller III do his work, and focus on his job: governing. His daughter Ivanka Trump was recently asked how she dealt with the media frenzy over Russia. She replied, “I’m trying to keep my head down, not listen to the noise and just work really hard to make a positive impact in the lives of many people.”

That’s a good strategy – and one her father ought to emulate.