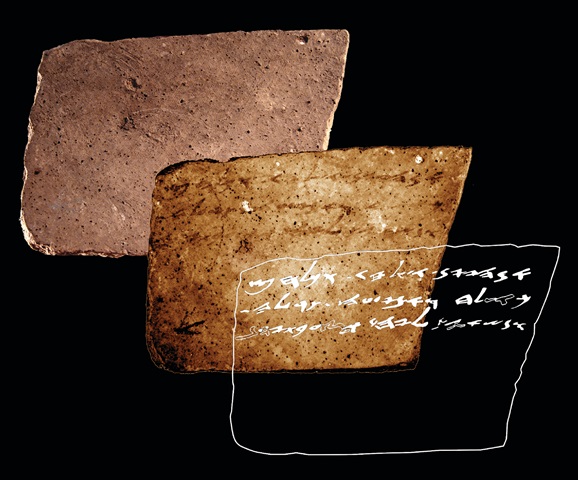 Using an innovative photographic process, researchers at the University of Tel Aviv have succeded in recent days in exposing a Hebrew inscription believed to date to the late Bayis Rishon period.

The inscription was discovered on a clay shard unearthed in the 1960s in Tel Arad and put on display in the Israel Museum, and which until now was thought to bear no writing whatsoever.

The writing concerns a shipment of wine and food to a military unit in Tel Arad.

“The level of literacy during the Bayis Rishon period was very high, but the significant texts of the time were written on papyrus, which has not survived well in the humid conditions in Israel,” explained Shira Faigenbaum-Golovin, from the Department of Applied Mathematics, who worked on the interdisciplinary research team.

“Only a few hundred samples of writing from this period have survived, all of them on clay,” not papyrus.

The inscriptions contain commands regarding the supply of commodities (wine, oil, and flour) to military units and movement of troops, set against the background of the stormy events in the final years before the fall of Judah. They include orders that came to the fortress of Arad from higher echelons in the military command system, as well as correspondence with neighboring forts. Most of the provision orders were found on the floor of a single room. They are addressed to a person named Elyashiv – the quartermaster in the fortress.

The technique employed was multispectral (MS) imaging over standard as well as IR photography. “Our experiments demonstrated that although the optimal imaging wavelength of each ostracon (inscription) may differ, it nevertheless belongs in the range between 550 and 950 nm,” the researchers said.