National U.S. Citizen Otto Warmbier, Said to Be in a Coma, Released From North Korea
National 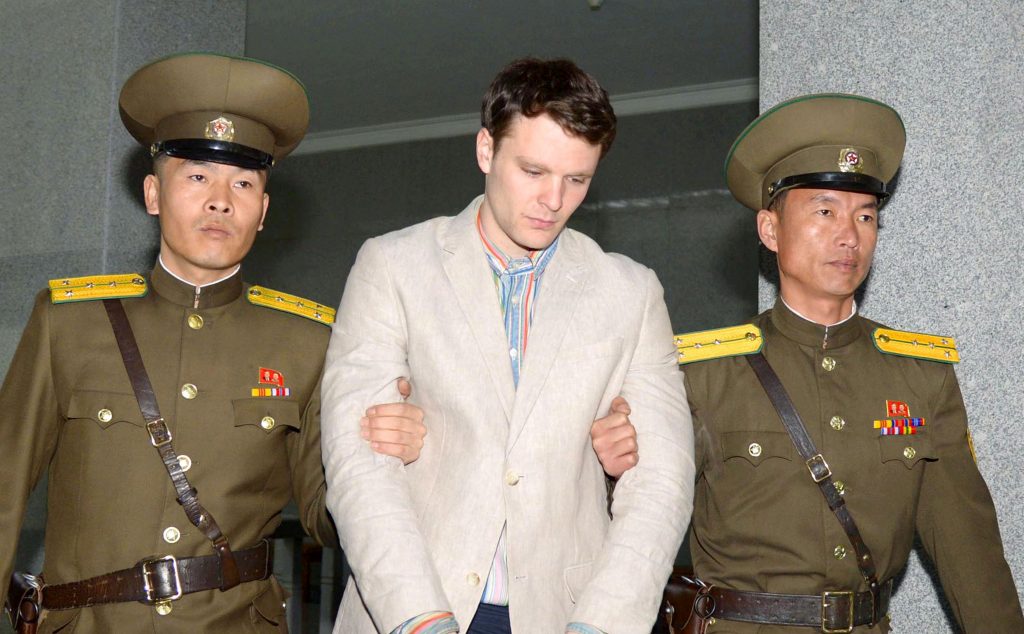 University of Virginia student Otto Warmbier has been medically evacuated from North Korea in a coma after being detained for 17 months, his parents told The Washington Post on Tuesday.

Warmbier, 22, is due to arrive home in Cincinnati on Tuesday evening, after a stop at a U.S. military facility near Sapporo, Japan.

The family said they were informed that North Korean officials had told American envoys that Warmbier became ill from botulism sometime after his March trial and fell into a coma after taking a sleeping pill. The Warmbiers said they were told their son has remained in a coma since then.

There was no immediate confirmation from U.S. officials of North Korea’s version of events – notably whether Warmbier was stricken with botulism, a potentially fatal illness that is caused by a toxin but is not usually associated with loss of consciousness.

“Our son is coming home,” Fred Warmbier told The Post on Tuesday morning after Otto Warmbier was evacuated. “At the moment, we’re just treating this like he’s been in an accident. We get to see our son Otto tonight.”

His release was announced in Washington by Secretary of State Rex Tillerson. Tillerson did not discuss Warmbier’s medical condition.

Tillerson called President Trump at 8:35 a.m. Tuesday to inform him that Warmbier was on an airplane en route to the United States, according to a senior administration official, who spoke on condition of anonymity to discuss the details. The last instruction the president left Tillerson was: “Take care of Otto,” the official said.

At the end of 2016, Warmbier was on a tour in North Korea, en route to Hong Kong, where he was to do a January study-abroad trip.

But on Dec. 31, his final night in Pyongyang, Warmbier apparently went to a staff-only floor of his hotel and attempted to take down a large propaganda sign lauding the regime.

He was charged with “hostile acts against the state,” and after an hour-long trial in March 2016, he was sentenced to 15 years in prison with hard labor.

He had not been seen in public since. Swedish diplomats, who represent U.S. interests in North Korea because the United States has no diplomatic relations with the country, were denied access to him.

Then suddenly, on Monday last week, North Korean representatives contacted American counterparts and told them that the student was in a coma.

Trump was immediately informed and ordered Warmbier’s medical evacuation, with the agreement of the North Koreans, according to people with knowledge of the process. “This is a Trump-led effort,” one said.

The logistics were in place by Thursday. Joseph Yun, the State Department’s special representative for North Korea policy, traveled to Pyongyang on a military medical plane, accompanied by doctors, to bring Warmbier out.

State Department officials are accompanying Warmbier from Sapporo to Cincinnati.

North Korea has woefully inadequate medical care, and it is not clear how North Korean doctors had been caring for Warmbier for more than a year in an unconscious state.

Emmett Saulnier, one of Warmbier’s roommates at University of Virginia, said he got a call Tuesday morning from Fred Warmbier to inform him of the release.

“I’m mostly just very happy to hear that he’s coming home and alive,” Saulnier said. “The coma is obviously very concerning. I’m not really sure what to think of that at this point… I’m hoping it’s not as bad as it sounds and he’ll wake up and be okay.”

Saulnier added, “I’m glad he’s going to have the best medical care, rather than whatever was going on over there.”

“North Korea should be universally condemned for its abhorrent behavior. Otto should have been released from the start,” Portman said in a statement. “For North Korea to imprison Otto with no notification or consular access for more than a year is the utmost example of its complete failure to recognize fundamental human rights and dignity.”

“It is horrific that a young man in a coma was incarcerated in a North Korea jail,” Connolly said in a statement.

Rep. Don Beyer, D-Va., meanwhile, said he was “heartened to see the reuniting of the Warmbier family, despite the tragic circumstances.”

A former Virginia resident, Kim Dong-chul, was arrested shortly after Warmbier, on accusations of espionage, and has been held since.

In April and May, North Korea detained two other Korean Americans, both of them affiliated with the Pyongyang University of Science and Technology, a private institution run by Korean American Christians.

Previous detainees have been released after visits from high-profile Americans, including former presidents Jimmy Carter and Bill Clinton. But efforts to persuade North Korea to release the men currently held had not been successful until Warmbier’s release Tuesday.