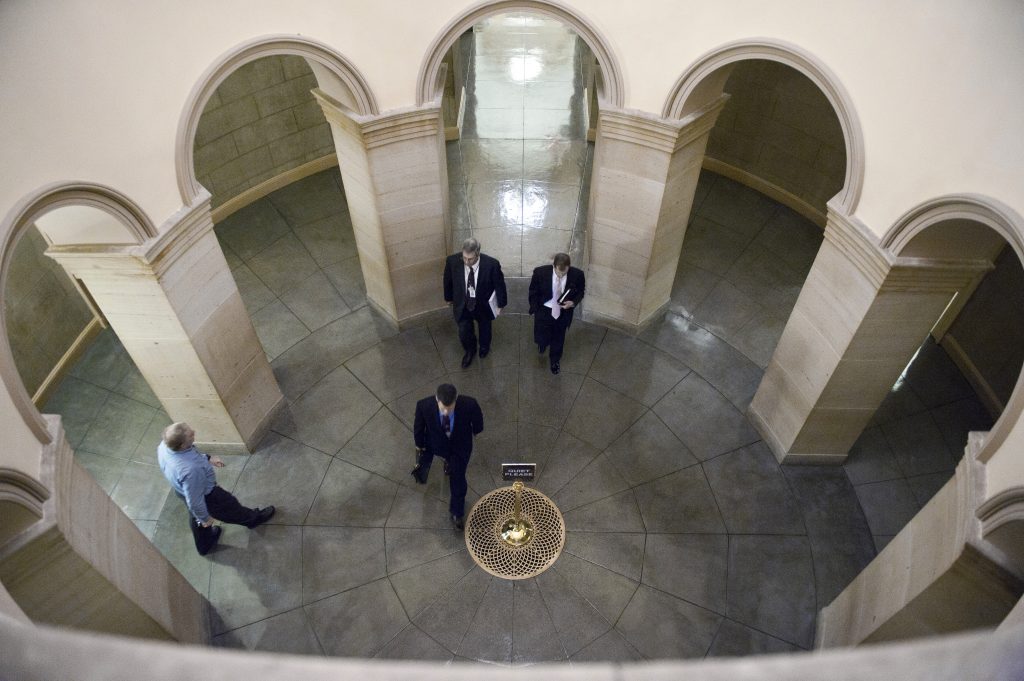 Reporters covering the Capitol were told Tuesday to stop filming interviews in Senate hallways, a dramatic break with tradition as lawmakers face pressure to respond to journalists’ inquiries about President Donald Trump, health-care legislation and other matters.

Correspondents from major networks said that staff from the Senate Radio and TV Gallery told them they could no longer conduct impromptu interviews with lawmakers in the hallways without prior authorization from the Senate Rules Committee and the lawmakers’ own staff.

“Reporters were in hallways this morning per usual. Gallery staff were dispatched to issue verbal directive: Stop filming,” Kasie Hunt, a congressional reporter with NBC News, wrote on Twitter. “Gallery staff told us the decision was from the Senate Rules Committee and to call them for future interview permission.”

“I was just told I cannot stand outside of the Budget Committee hearing room to interview lawmakers,” Bloomberg TV chief Washington correspondent Kevin Cirilli wrote on Twitter. He added he had scheduled an interview with Sen. David Perdue, R-Ga., that was “canned last second” because of the alert.

The Senate Radio and TV Gallery, which helps to manage the logistics of networks’ presence on Capitol Hill, declined to comment. “I’ve got no news for you,” a staffer at the gallery told The Post. She declined to give her name and hung up.

Gallery director Mike Mastrian did not respond to several other requests for comment.

“The Rules Committee has made no changes to the existing rules governing press coverage on the Senate side of the Capitol complex,” Shelby said in a statement.

“The Committee has been working with the various galleries to ensure compliance with existing rules in an effort to help provide a safe environment for Members, the press corps, staff and constituents as they travel from Senate offices to the Capitol. Once again, no additional restrictions have been put in place by the Rules Committee.”

The apparent change in practice comes as the number of reporters on Capitol Hill has increased dramatically, reflecting the high stakes facing Republicans as they respond to controversies involving Trump and attempt to advance their policy agenda.

Sen. Amy Klobuchar, Minn., the ranking Democrat on the Rules Committee, told reporters that the policy was not formal and that Shelby had called it a “staff inquiry.” She said Shelby hadn’t notified her of any changes, but assured her over the phone on Tuesday that he wouldn’t move forward on a major shift without first consulting her.

“He seemed to imply they weren’t going to change the policy, but I’m not going to put words in his mouth,” Klobuchar told reporters.

Were Shelby to go forward with the new press restrictions, Klobuchar said she would oppose it, calling it an “assault on the First Amendment.”

“They’re trying to keep senators from being held accountable with respect to health-care policy, and I think it runs contrary to the openness and transparency the American people deserve,” Wyden told reporters.

A bevy of Senate Democrats condemned the restrictions that were communicated Tuesday morning to reporters.

“Press access should never be restricted unfairly, particularly not when one party is trying to sneak a major bill through Congress,” Senate Minority Leader Charles Schumer, D-N.Y., wrote on Twitter, alluding to the Republican health-care bill.

“This is cowardly and unilateral,” Sen. Brian Schatz, D-Hawaii, wrote on Twitter.

“The Rules Committee has done no such thing,” he said in an interview. “We have not directed anyone to restrict anyone’s access.”

Meanwhile, reporters in the hallways remained in limbo as of 1:30 p.m.

“So far we have not been told we are allowed to resume hallway interviews,” Hunt tweeted.