What We Know About Trump-Russia 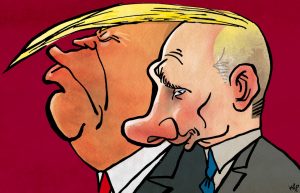 The following is what we know about the Trump-Russia collusion story after six months of reports, commentary and public hearings:

We know that there are Trump-Russia communications intercepted by the British GCHQ in 2015, but we know the FBI obtained a FISA (Foreign Intelligence Surveillance Act) order on former Trump campaign aide Carter Page only nine months later, in July 2016, and we also know the FBI never wiretapped Trump Tower, the place where these colluders worked. Meaning, the intercepts were likely not relevant enough to generate an investigation on anyone sooner, or ever, on Trump Tower.

We know that President Trump made a “baseless allegation” that he was spied on by the Obama administration but we also know from President Obama’s last CIA Director John Brennan (May 23, 2017 hearing) that he convened a group of CIA, FBI and NSA officials in the summer of 2016 to investigate Trump-Russia and we know that Obama’s Director of National Intelligence James Clapper (during a May 8, 2017 congressional hearing) admitted that he requested the unmasking of 1,934 Americans in 2016, which would likely include Trump staffers.

We know that Mr. Brennan ordered an investigation, but we also know from him (May 23, 2017 hearing) that he left office in January not knowing if Russia was successful in getting any American even unwittingly to work for Russia. If there was evidence, it is reasonable to believe he would be informed about it, to retroactively legitimize his investigation of Mr. Trump’s people.

We know, despite intercepts and investigations, no finding of collusion was mentioned in the CIA/FBI/NSA report on Russia’s involvement in the elections.

We know from Clapper (from a May 8, 2017 hearing and a May 12 media appearance) that he did not know details of the investigation. However, we know that on March 5, 2017, on “Meet the Press,” Mr. Clapper said he can deny the existence of a FISA warrant on Trump Tower; which means he was involved in the investigation, yet “by the time I left, I saw no smoking-gun-certitude evidence of collusion” (May 28, 2017).

We know that Russia released only emails from the Democrats, which is seen as proof that Russia wanted to harm Hillary Clinton, but we also know from former FBI Director James Comey (Jan. 10, 2017 hearing) that the FBI “did not develop any evidence that the Trump campaign or the current Republican National Committee [emails] were successfully hacked”; which means WikiLeaks released only from one national campaign because they had only from one side.

We know there has been collusion between Russia and Trump officials, but we also know from a New York Times headline (May 24, 2017) that “Top Russian Officials Discussed How to Influence Trump Aides Last Summer”, which disproves collusion, because if Trump’s aides were colluding, there would be no need for the Russians to discuss in the summer of 2016 how to influence them.

We know of the above NYT headline, but we also know from the article itself that “it is unclear, however, whether Russian officials actually tried to directly influence Mr. [Paul] Manafort and Mr. [Michael] Flynn.” Again, it is not known if Russians even actually tried to influence Trump aides.

We know from a Reuters headline (April 21, 2017) that a “Putin-Linked Think Tank Drew Up Plan to Sway 2016 U.S. Election,” but we know from the same story that the plan was written in June 2016, which is months after the DNC hacking, and that the Think Tank’s plan did not mention hacking or collusion, the two tactics allegedly used to sway the elections.

We know from a NYT headline (February 14, 2017) that three “Trump Campaign Aides Had Repeated Contacts With Russian Intelligence”, but we know from the same NYT story that “it is not unusual for American businessmen to come in contact with foreign intelligence officials, sometimes unwittingly, in countries like Russia and Ukraine, where the spy services are deeply embedded in society.” We also know from Comey (June 8, 2017) that the New York Times story of contacts “was not true.”

We know from a Reuters headline (May 8, 2017) that the “Trump campaign had at least 18 undisclosed contacts with Russians” in 2016, likely including some of those already reported by The New York Times months earlier; but we know from the same Reuters story that “the people who described the contacts to Reuters said they had seen no evidence of wrongdoing or collusion between the campaign and Russia in the communications reviewed so far,” communications which involved General Michael Flynn.

We know that General Michael Flynn’s conversations with Russia’s Ambassador Sergei Kislyak in December 2016 led to General Flynn’s firing, but we also know from The New York Times (Feb 14, 2017) that “the Obama officials asked the FBI if a quid pro quo had been discussed on the call, and the answer came back no, according to one of the officials… The topic of sanctions came up, they were told, but there was no deal.”

Now that we know that the media kept feeding us contradictory and misleading stories regarding Trump-Russia for half a year, we know they are not interested in truth or facts; just anti-Trump activism.