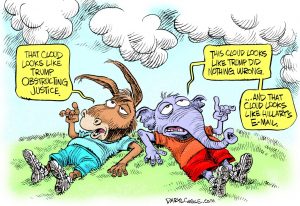 Before you start reading, you can leave whatever you know about James Comey’s testimony at the door. This is a jury, and reading about the case in the media may be sensational but can be poisonous to our common goal of getting at the truth.

Never since a media personality made up a story that George Washington could not tell a lie has there been such a discrepancy between the media narrative and reality.

What’s Jim to do? He tried gauging the two execs, cozying up to Jack when he appeared to be on the rise and transferring to Jill when she was ahead. Nothing worked. And he ended up on the wrong side of both. He was on the verge of getting pink slipped when all of a sudden — the break.

James Comey is one lucky man. He was an FBI chief in arguably one of the hardest positions — sandwiched between Republican calls of “Lock her up!” and Democrats who had just nominated Hillary Clinton as their standard-bearer. Comey tried pleasing both groups but ended up collecting the sewer ends of both.

Just when he had been left for dead, he caught a break — the media, for their own selfish interests, resurrected him. Newspapers now consider him the very paragon of virtue, whose word is gold against the president of the United States.

Leading the hagiographic charge is none other than the once-venerable Washington Post, just months after calling for Comey’s head on a platter — no difference whether a silver, iron or platinum one. Also on the bandwagon was the Daily News — which alternates between presenting Trump on their front page wood as a clown, a murderer and, on better days, a thief — whose editorial board issued the “highest condemnation” of Comey and called on him to resign.

Then Comey got his lucky break. He was fired — but by Trump, not Hillary Clinton. And if Jack says diddle, the Democrats and their communications arm must say squat. So the media is now holding up Comey as a supremely rational and honorable man whose word can be taken to the bank.

It is laughable to hear the same cast of characters who as little as six months ago considered Comey’s credibility a tad higher than the Loch Ness monster now going with him for broke.

Here’s my thing with the media — they’re a 20th-century dinosaur when news consumers are in the 21st century, an anachronism holding onto visions of past glories and future victories. But they’ve been wrong on every recent significant event.

Britain’s election last week was a major flop for Prime Minister Theresa May, who had been predicted by polls to cruise to a majority; instead, she is forced to collate with a minor Irish party. In a little more than two years, Britain has had two general elections and a nationwide referendum. Each time, the politicians, pollsters, betting markets, political scientists and commentators got it wrong.

And don’t forget about the Trump victory, Netanyahu’s win in 2015, and Erdogan’s loss that same year.

All around, polls are not being borne out in reality. Yet, we still hear how President Trump is the most unpopular president in history for a first-year president, how 61 percent think Trump’s firing of Comey was in order to protect himself rather than for the good of the country, and that 56 percent think Trump is trying to interfere with the Russia investigations.

Twenty years ago, The Washington Post and The New York Times could keep news under wraps by not reporting it. Today, the news is out there so they try spinning it out of control. One thing we must have over them is the ability to think for ourselves.

This is supposed to be an opinion column, but let me stick in a fact. Presidents — get ready for this bombshell — are fully entitled to do whatever they want when it comes to the executive branch. We live in a time when the media selectively allows you to hear facts, but here’s one to bear in mind — Trump, as so many of his predecessors have done, is allowed to fire the head of the FBI, is allowed to direct him to drop this investigation or focus on that probe.

In fact — yeah, another fact falling to an opinion writer to divulge — former president Obama’s attorney general, Loretta Lynch, asked the FBI to stop calling the Clinton email probe a “criminal investigation.” How should it be referred to? A “matter.” As one wag said at the time, the FBI’s name should be changed to the “Federal Bureau of Matter.”

Did Trump actually tell Comey to drop the probe into Michael Flynn? The president says he didn’t. I may be old-school here, but a president’s word here means more to me than Comey’s — except, of course, if the president comes out with an outright lie, such as the Obamacare “keep your doctor” alternative fact, which cost millions of Americans their health security.