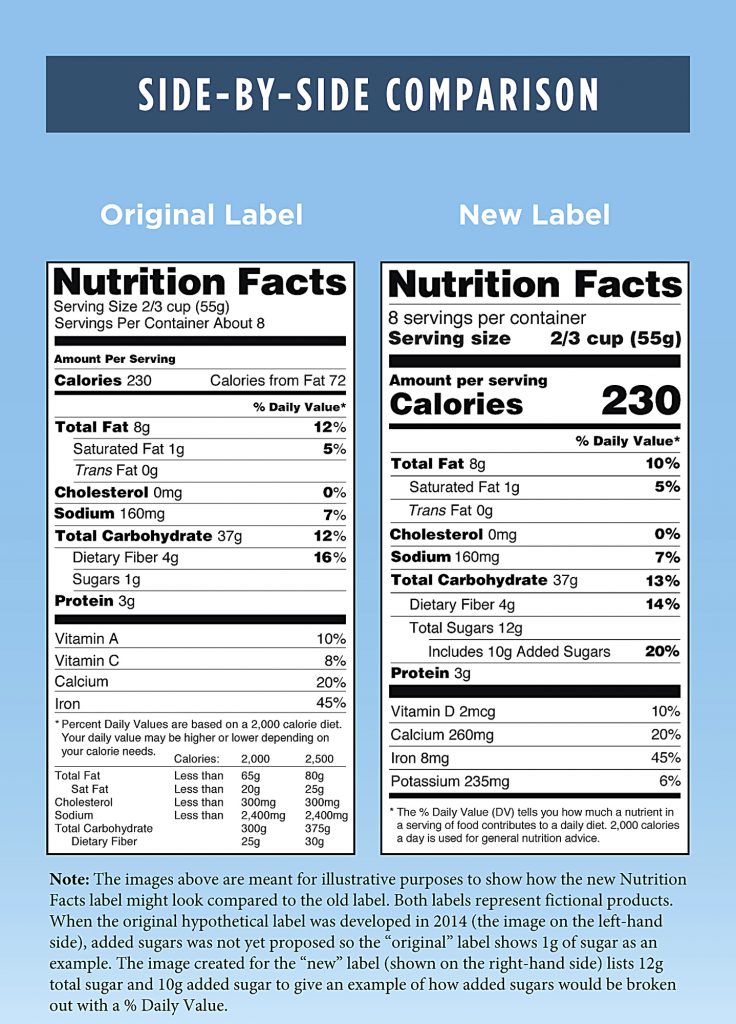 A revamped nutrition facts panel designed to make it easier to see how many calories and added sugars are in packaged foods and drinks is being delayed.

The Food and Drug Administration said Tuesday it plans to push back the deadline for a rule requiring food companies to use the new label. It’s the Trump administration’s latest delay of the Obama administration’s rules intended to improve food labeling and make foods healthier and safer.

The revised nutrition facts panel would make the calorie counts on packaged food and drinks more prominent, adjust serving sizes to be more realistic and specify the amount of added sugars in products. The labels currently list how many total sugars are in a product, including those that are naturally occurring, such as in fruit and milk.

Previously, the FDA had given companies until July 26, 2018 to comply, with smaller food makers getting an extra year. On Tuesday, the FDA said it intends to give companies additional time to comply. It did not provide a specific deadline. Spokeswoman Deborah Kotz said in an email that details will be released at a later date.

The Grocery Manufacturers Association and other industry groups had asked for the deadline to be pushed to 2021, according to a letter sent earlier this year to Health and Human Services Secretary Tom Price, who was appointed by President Donald Trump. The letter was obtained by the health advocacy group Center for Science in the Public Interest.

In a statement, the Grocery Manufacturers Association said food and beverage companies want to help people make informed choices, but that the “fast-approaching compliance deadline” was difficult to meet without final guidance from the FDA on certain details.

Jim O’Hara, director of health promotion policy for CSPI, said that the delay will only cause confusion as some companies switch to the new label as planned, ahead of others.

“The longer you draw this out, the more confusing the marketplace becomes,” he said.

Candy maker Mars Inc., for instance, said it is still planning to start rolling out the new nutrition facts panel on select products in coming months and be in full compliance by next year.

Spokesman Brad Figel noted that postponing the deadline for too long would result in there being two nutrition facts panels in the marketplace for an extended period of time. Still, he said he wasn’t surprised by the FDA’s decision.

“There’s just been a lot of pressure to extend the deadline,” Figel said.

The FDA also recently delayed a rule that would require restaurants, grocery and convenience store chains to post calorie counts for prepared foods. That rule was supposed to go into effect last month, but was delayed until next year. That is also leading to inconsistency in what people see, since some businesses had already started posting the calorie counts in anticipation of the previous deadline.