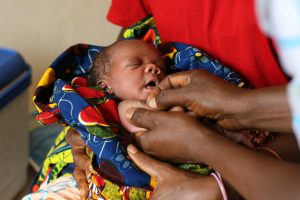 Democratic Republic of Congo has suffered two separate outbreaks of polio, a debilitating and potentially deadly disease the world is trying to eradicate, the World Health Organization said Tuesday.

Confirmation of the outbreaks in Congo’s Haut-Lomami and Maniema provinces came less than a week after the WHO said polio had resurfaced in Syria, in an area partly controlled by Islamic State.

Like the Syrian outbreak, the four Congolese cases were caused by circulating vaccine-derived poliovirus type 2, which emerges in areas with only patchy vaccine coverage after being excreted by people who have been vaccinated.

In 1988, the goal of eradicating the disease globally was set for the year 2000, but it has been repeatedly pushed back, with billions of dollars spent on trying to snuff out the last remaining pockets of disease.

The new head of the WHO, Tedros Adhanom Ghebreyesus, welcomed $1.2 billion of new funding for the battle against polio, made at the Rotary Convention in Atlanta, the WHO said.

“It is humbling to see again the power of this incredible global partnership to generate funding to fight one of the world’s most horrible and debilitating diseases,” Tedros said in a WHO statement. “We must finish the job properly to ensure that there is no chance of this terrible disease coming back.”

Thirty years ago, polio paralyzed more than 350,000 children each year in more than 125 countries around the world, the statement said. Since then, incidence of the disease has been reduced by more than 99.9 percent, it said.

Polio invades the nervous system and can cause irreversible paralysis within hours. It spreads rapidly among children. If transmission can be ended, it would be only the second human disease to be eradicated since smallpox was banished in 1980.

The original wild virus still circulates in Afghanistan and Pakistan, with a total of five cases this year. Vaccine-derived polio is a risk for war zones and other areas with poor health coverage.

The Congolese cases are the first in the country since 2012. Nigeria, Laos, Myanmar and Ukraine have also seen vaccine-derived polio cases in the past three years.