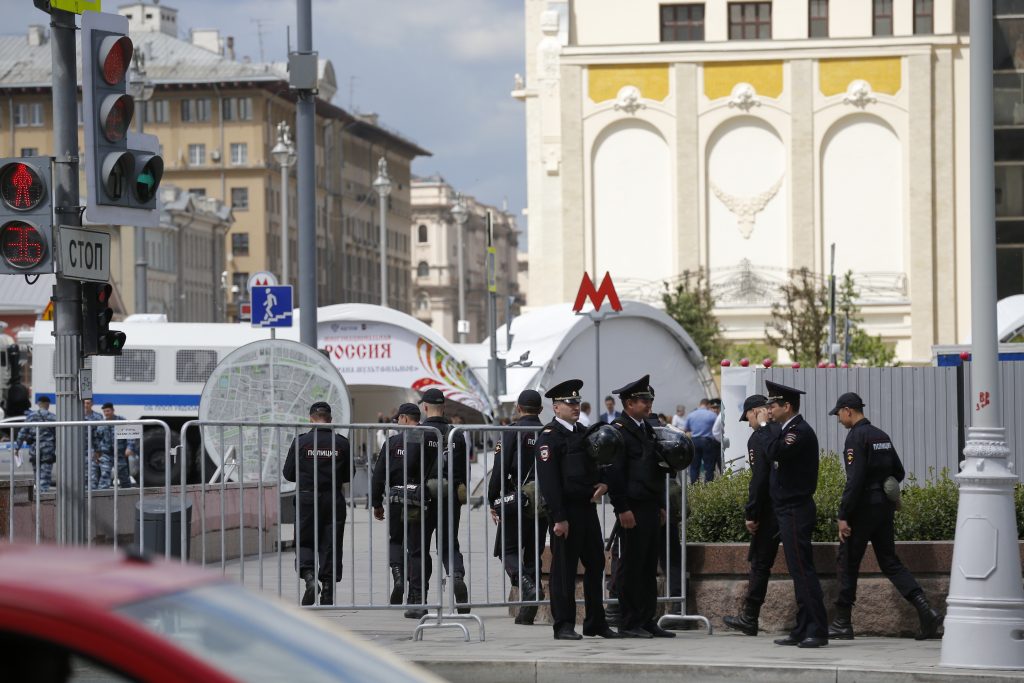 Protests spearheaded by prominent opposition figure Alexei Navalny were taking place across the country on Monday, but Navalny himself was reportedly arrested outside his Moscow home en route to the centerpiece demonstration in the capital city.

Navalny’s wife, Yulia, said he was arrested about a half hour before the demonstration was to begin. There was no immediate statement from police.

Although city authorities had agreed to a location for the Moscow protest, Navalny called for it to be moved to Tverskaya Street, one of Moscow’s main thoroughfares. He said contractors hired to build a stage at the agreed-upon venue could not do their work after apparently coming under official pressure.

Tverskaya, known in Soviet times as Gorky Street, was closed off to traffic on Monday for an extensive commemoration of the national holiday Russia Day, including people dressed in historical Russian costumes.

After the change, Moscow police warned that “any provocative actions from the protesters’ side will be considered a threat to public order and will be immediately suppressed.”

A regional security official, Vladimir Chernikov, told Ekho Moskvy radio that police would not interfere with demonstrators on the street — as long as they did not carry placards or shout slogans.

More than 1,000 protesters were arrested at a similar rally on March 26.

The protests in March took place in scores of cities across the country, the largest show of discontent in years and a challenge to President Vladimir Putin’s dominance of the country.

The Kremlin has long sought to cast the opposition as a phenomenon of a privileged, Westernized urban elite out of touch with people in Russia’s far-flung regions. But Monday’s protests could demonstrate that it has significant support throughout the vast country.

Navalny’s website reported Monday that protests were held in more than a half-dozen cities in the Far East, including the major Pacific ports of Vladivostok and Khabarovsk and in Siberia’s Barnaul. Photos on the website suggested turnouts of hundreds at the rallies.

Eleven demonstrators were arrested in Vladivostok, according to OVD-Info, a website that monitors political repressions.

Navalny has become the most prominent figure in an opposition that has been troubled by factional disputes. He focuses on corruption issues and has attracted a wide following through savvy use of social media. His report on alleged corruption connected to Prime Minister Dmitry Medvedev was the focus of the March protests.

Navalny has announced his candidacy for the presidential election in 2018. He was jailed for 15 days after the March protests. In April, he suffered damage to one eye after an attacker doused his face with a green antiseptic liquid.