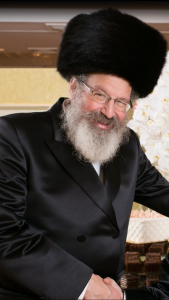 Reb Dovid Yitzchok Wallk of Boro Park was niftar Sunday evening, 17 Sivan, at the age of 61, after a difficult illness. Reb Dovid, a highly respected member of the Gerrer kehillah and alumnus of Yeshiva Derech Chaim, was a noted baal tzedakah and oved Hashem who persevered through great difficulties to lead a life dedicated to Torah, avodah and gemilus chassadim.

Dovid was born to Dr. Zelig and Mrs. Tzipporah Esther Wallk in Chicago in 1955.

When Dovid neared bar mitzvah age, his parents hired an Orthodox Rabbi to give him bar mitzvah lessons. The Rabbi had a profound effect on the young Dovid, who was inspired to live a Torah life.

Dovid attended the Chicago Jewish Academy, a frum high school; upon graduation, he went to Eretz Yisrael to learn in Yeshivas Itri.

While in Eretz Yisrael, Dovid had an issue for which he sought the guidance of a Gadol. A friend of his from Chicago was learning in the Gerrer Yeshiva, and Dovid asked his friend to bring him to the Gerrer Rebbe, Harav Yisroel Alter, now known as the Bais Yisroel, z”ya. The Rebbe took a deep interest in helping the sincere young man, spending several one-on-one sessions guiding him through the inevitable difficulties he would face upon returning to America. And before Dovid left for America, the Rebbe called his friend into his study and gave detailed instructions on how to help Dovid once he returned to America.

The sessions spent with the Rebbe had a lifelong impact on Dovid, who would always remember how this Rebbe to thousands of Chassidim devoted significant time and interest to a young man, who, at the time, was not learning in his yeshivah or even a Gerrer Chassid.

Later in life, no matter what difficulties he encountered — whether in maintaining a Torah life, or personal or physical issues — Dovid said he was able to persevere through it all by remembering the final words the Bais Yisrael told him: “Yesh lechah karaj? Im yihyeh lechah karaj; im tirtzeh tuchal lhitgaber al hakol! — Do you have courage? If you have courage; if you want, you can overcome anything!

Once back in the States, Dovid briefly attended Mirrer Yeshiva in Flatbush, before leaving to join the first class of the new Yeshiva Derech Chaim in 1975. The yeshivah, then located at 18th Ave. and 49th Street, was founded by Harav Yisroel Plutchok, shlita, and Harav Mordechai Rennert, zt”l.

Dovid married Mila Perlman, of Denver, and the couple settled in the Gerrer community of Boro Park. Reb Dovid held jobs in diamond-dealing and in real estate, but he was always a tremendous masmid, kovei’a significant ittim l’Torah, and gave generously to tzedakah.

Reb Dovid and, tbl”c, his wife were loving and dedicated parents to two sons and six daughters, as well as eight children-in-law.

“He went out of his way to make every son- and daughter-in-law feel like a child,” his son-in-law Chaim Steinberg told Hamodia. “He’d make sure to find out every food or drink I liked. If I was coming for Shabbos, he would call me on Wednesday, just to let me know that my favorite foods and drinks were waiting for me in the fridge.”

“Shabbos in general had a very special place in his heart. He used to like to give tzedakah to organizations that helped people with Shabbos.”

Family members recall Reb Dovid particularly going out of his way to buy something special if a grandson was making a siyum, to demonstrate chashivus for Torah.

Unsurprisingly, for a devoted Gerrer Chassid who always considered Derech Chaim his primary yeshivah, among the institutions he gave large amounts of tzedakah to were Gerrer mosdos and Yeshiva Derech Chaim.

Several years ago, his Gerrer shtiebel on 19th Ave. and 50th Street was locked by the landlord due to nonpayment of rent. Reb Dovid quietly went to the landlord and wrote a check for the full amount owed.

Reb Dovid would frequently say, “I have hakaras hatov to Derech Chaim and to the Roshei Yeshivah, my Rebbeim,” Rabbi Avrohom Geffner, executive director of Derech Chaim, told Hamodia. Throughout his life, “he was a very dear, dedicated, and loyal talmid to the yeshivah,” frequently coming to visit, attending functions, and donating tzedakah generously.

“We felt his love and loyalty to the yeshivah always, on every level,” said Rabbi Geffner. “He was an extremely gutte mentch, with a heart of gold.”

Reb Dovid was honored twice at Derech Chaim dinners, most recently in 2014: At a dinner held in memory of the recently deceased Harav Mordechai Rennert, zt”l, Reb Dovid was the talmid chosen to represent the yeshivah’s alumni.

Just over a year-and-a-half ago, right around his 60th birthday, Reb Dovid was diagnosed with cancer. Though it eventually spread throughout his body, Reb Dovid fought to the very end, not only to live — but to live as a Torah Jew.

“He once was scheduled to start a chemotherapy session on a Thursday, but he asked for it to be rescheduled for the next week so that he could enjoy one more Shabbos without suffering the effects of chemo,” recalls his son-in-law Chaim Steinberg.

“My father-in-law set up chavrusos to learn with him, even when he was sick. One chavrusa, Yossel Glicksman, learned with him during his chemo sessions.”

Even during his final few days, when Reb Dovid’s body was wracked with cancer and he was barely conscious, Reb Yossel would come to the hospital and learn by his beloved chavrusa’s bedside.

Reb Dovid’s neshamah left shortly before sunset on Sunday evening. The levayah was held in Shomrei Hachomos in Boro Park, then rushed to a flight for Eretz Yisrael, for a levayah by the Gerrer beis medrash and kevurah on Har Hamenuchos. 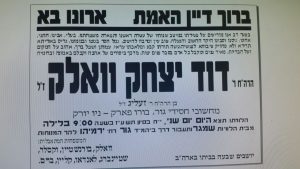 Reb Dovid Yitzchok Wallk, z”l, is survived by, ybl”c, his wife and their eight children, ka”h, Chaim Wallk, Gitty Borenstein, Chanie Waxler, Dina Steinberg, Leiby Wallk, Rivki Landau, Suri Baum, Layala Klein, as well as many grandchildren, all of whom are living lives devoted to Hashem and His Torah, and who are surely bringing Reb Dovid nachas in Gan Eden.

Shiva will be observed at 5008 20th Avenue in Boro Park, until Sunday morning.