Politics Praise for the Chief: Trump’s Cabinet Tells Him It’s an ‘Honor’ and ‘Blessing’ to Serve
Politics 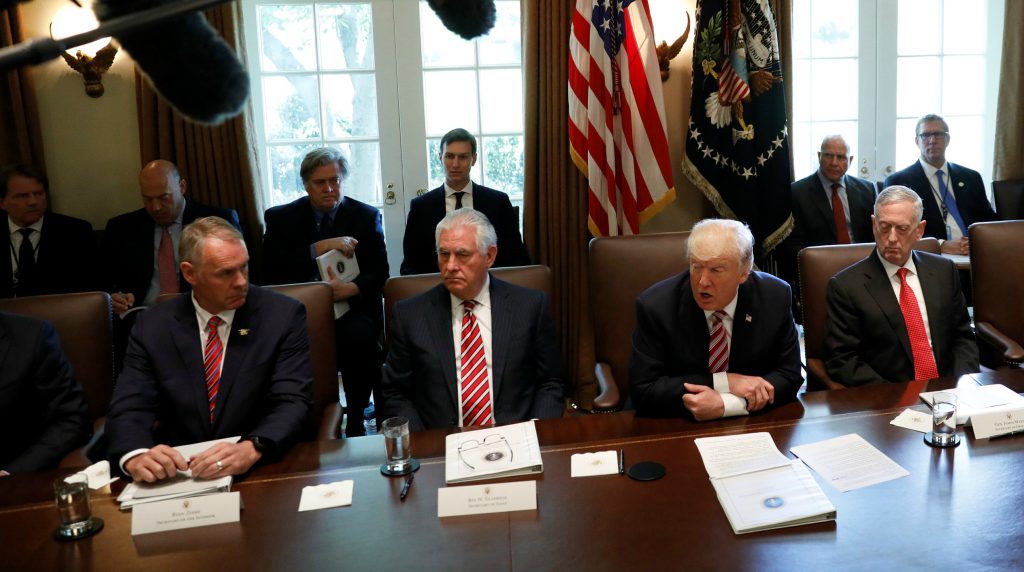 At Monday’s Cabinet meeting – the first President Donald Trump had held with everyone on board – White House Chief of Staff Reince Priebus spoke up to thank Trump “for the opportunity and blessing that you’ve given us to serve your agenda and the American people.”

Priebus said he was offering words on behalf of everyone in the room. But one by one, pretty much everyone else seated around the table took the opportunity to lavish their leader with praise, too, as the media looked on.

“It’s an honor to be able to serve you,” said Attorney General Jeff Sessions.

“I am privileged to be here,” said Labor Secretary Alexander Acosta. “Deeply honored.”

“What an incredible honor it is to lead the Department of Health and Human Services at this pivotal time under your leadership,” Tom Price, secretary of that department, added when it was his turn to speak. “I can’t thank you enough for the privileges you’ve given me and the leadership that you’ve shown.”

When other Cabinet members got the opportunity, they offered more specific adulation. Mick Mulvaney, director of the Office of Management and Budget, thanked the president for his “direction in pulling that budget together.”

Transportation Secretary Elaine Chao thanked Trump for visiting her department last week, relaying that “hundreds and hundreds of people were just so thrilled.”

And Agriculture Secretary Sonny Perdue, after noting that some of his colleagues had touted their international travels for Trump, served up this: “A lot of us just got back from Mississippi. They love you there.”

The over-the-top praise of the president by his Cabinet came as the biggest items on his legislative agenda have made little progress, his administration continues to be dogged by investigations into his campaign’s ties to Russia, and his disapproval rating in the latest Gallup tracking poll rose to 59 percent.

“GREAT meeting today with the best staff in the history of the world!!!” Schumer wrote.

The video depicted him sitting at a conference table with three staffers.

“Lucy, how’d we do on the Sunday show yesterday?” Schumer asked one of them, his immigration counsel, referring to his appearance the day before on CBS’ “Face the Nation.”

“Your tone was perfect,” the aide said. “You were right on message.”

“Michelle, how’d my hair look coming out of the gym this morning?” Schumer asked next, posing the question of his director of scheduling.

“You have great hair,” she said. “Nobody has better hair than you.”

A Schumer budget adviser then chimed in, parroting Priebus.

“Now before we go any further, I just want to say thank you for the opportunity and blessing to serve your agenda,” he said. Schumer broke into laughter.

Trump used Monday’s meeting to try to make a public case that – despite multiple investigations into election meddling by Russia and other distractions – his administration is racking up accomplishments at a record clip.

“Never has there been a president, with few exceptions – case of FDR, he had a major depression to handle – who has passed more legislation and who has done more things than what we’ve done,” said Trump, referring to President Franklin D. Roosevelt.

“I think we’ve been about as active as you can possibly be at a just about record-setting pace,” he added.

While Trump has issued a flurry of executive orders – more than any recent president at this point in his tenure – Congress has yet to pass any of his marquee agenda items. Those include a revamp of the Affordable Care Act, a tax-code overhaul and an infrastructure package.

Most bills that Trump has signed have been modest in nature, including several rolling back regulations adopted in the closing stretch of President Barack Obama’s tenure.

Trump began the meeting by berating Democrats, including Schumer, for taking longer than he wanted to confirm his Cabinet picks. The president also accused them of being “obstructionists” on his high-profile agenda items.

“If we had the greatest bill in the history of the world on health care, we wouldn’t get one vote from the Democrats, because they’re obstructionists,” Trump said. “That’s what they want to do. That’s the game. They think that’s their best political gain.”

Republicans are using a parliamentary maneuver to try to pass a health-care bill that doesn’t require any Democratic votes. After several tries, a bill was pushed through the House, but it is being rewritten in the Senate.

During the meeting, Trump also announced that he would hold a news conference in two weeks to lay out his administration’s plan to fight the Islamic State terrorist group.

He said that his administration had already taken some steps to cut off funding for terrorist organizations.

Trump’s national security efforts were praised later in the meeting by his Cabinet secretaries, including Mike Pompeo, director of the CIA.

He told Trump he was “honored” to serve him but cut his remarks shorter than some colleagues.

“In the finest traditions of the CIA, I’m not going to share a …..thing in front of the media,” Pompeo said to laughter.

Defense Secretary Jim Mattis was the most reserved in his comments, offering praise for the “men and women of the Department of Defense” but not Trump specifically.