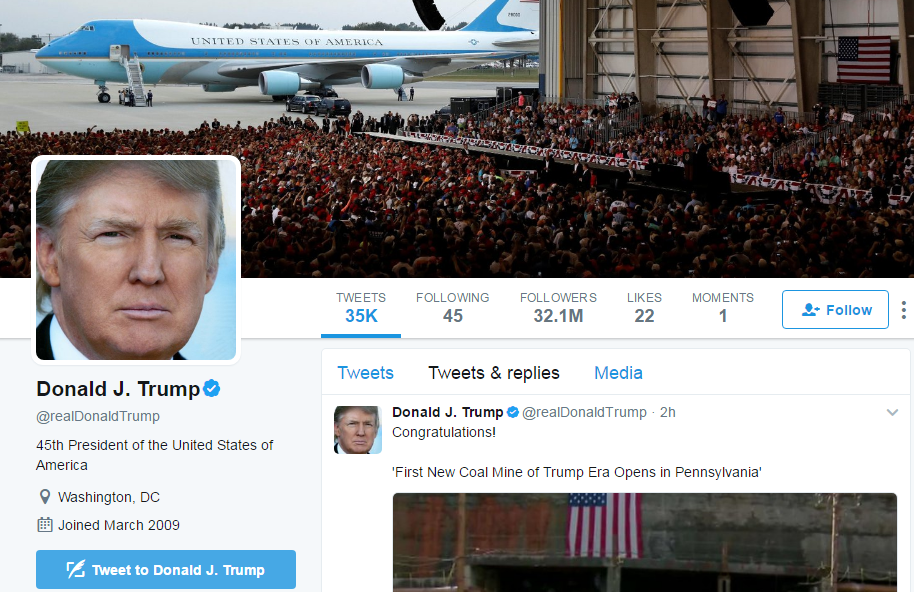 For a while it seemed that President Donald Trump might stop or restrict his tweeting, on the advice of his lawyers, but that now seems like the distant past. He has continued to tweet about fake news, the Russia investigation and the travel ban, as well as taking credit for the Qatar cut-off.

No other major politician does anything like this, so how can such behavior make sense? The ACLU even tweeted in response that it welcomes Mr. Trump’s social media presence, as it helps their court cases. Trump’s tweets make it easier to argue that his proposed travel ban was intended as discriminatory to Muslims.

I’d like to consider the strongest strategic and tactical case for Trump’s continued tweeting. Don’t take that as an endorsement of his agenda, but understanding should come before condemnation.

Imagine a president whose view of social change is extremely pessimistic. He thinks that America has gone far off a desirable track, and he despairs at the prospect of ready change. All around him, he sees a news media, a bureaucracy, a foreign policy establishment and a think-tank world mostly opposed to his agenda and to his methods.

Furthermore, assume the same president spent eight years watching President Barack Obama. Obama was highly strategic and thoughtful, and yet his legacy is an open question. Many Obama initiatives are being reversed by Trump, including possibly his signature health-care policy. Trump might plausibly expect that, if he proceeded along normal lines, many or most of his policies would be overturned by his successor, too. And Trump has nothing like the backup intellectual and policy infrastructure of the Obama years.

So here’s the final piece of the puzzle. Let’s say you think that a big chunk of the American public has a natural affinity for your views, but they have been corrupted by the liberal media and political establishment and the cult of political correctness. If only they could keep on hearing the truth, over time they would shift in your direction, even if they don’t end up supporting you personally. For instance, you might think that most voters are instinctively nationalist, and ultimately will end up thinking in nationalistic terms, no matter where their party loyalties fall.

On top of all that, now imagine that you consider nationalism, resurrecting America as it once was, negotiating from strength, returning to older notions of masculinity and “building a wall” as the major issues of the day. You don’t see the traditional Republican concerns with cutting taxes and repealing Obamacare as all that salient for reversing America’s deterioration, even if you are willing to go along with those reforms. Nor, given your nationalism and unilateralism, do you see alienating allies as a major cost of opining so openly.

In that rather pessimistic view of the world, it might make sense to give up entirely on the idea that your administration will accomplish much in the way of policy, at least as the concept is traditionally understood. Instead, you might be thinking of shifting the window of policy debate over a 10- to 20-year period. That is, you might be hoping the American public will be thinking in more Trumpian terms a few administrations from now, even if outwardly they have rejected your legacy. It then will be the case that mainstream politicians will work to implement some Trumpian ideas through more traditional channels.

Recall Norman Thomas, who ran for president repeatedly on the Socialist ticket early in the 20th century. He never got very far, but most of his social welfare agenda ended up being enacted into law. Trump, of course, actually is president, but maybe that means he simply has a bigger platform, rather than being able to pull levers to create his desired world.

Now let’s go back to Twitter. It does keep Trump’s ideas before the public eye to a remarkably intense degree. At no point in my lifetime have I seen a president so dominate the news cycle. And even if most Americans don’t agree with Trump, or think he tweets too much, in the longer run Trump may be shifting the “Overton window” for what is acceptable political discourse.

I’m not suggesting that Donald Trump has made strategic calculations in exactly the language I am outlining. Instead, he may simply feel the need to get his views out there, hoping for the best. But there may be method in such apparent madness.

That said, I don’t think Trump’s strategy is likely to succeed, given the accumulated weight of forces against radical Trumpian change. But say it has a 10 percent chance of being effective, and other paths don’t offer much hope for progress on the issues Trump cares about.

Given the stakes at hand, is it really so wise for us to dismiss all this tweeting as a stupid tactical error?