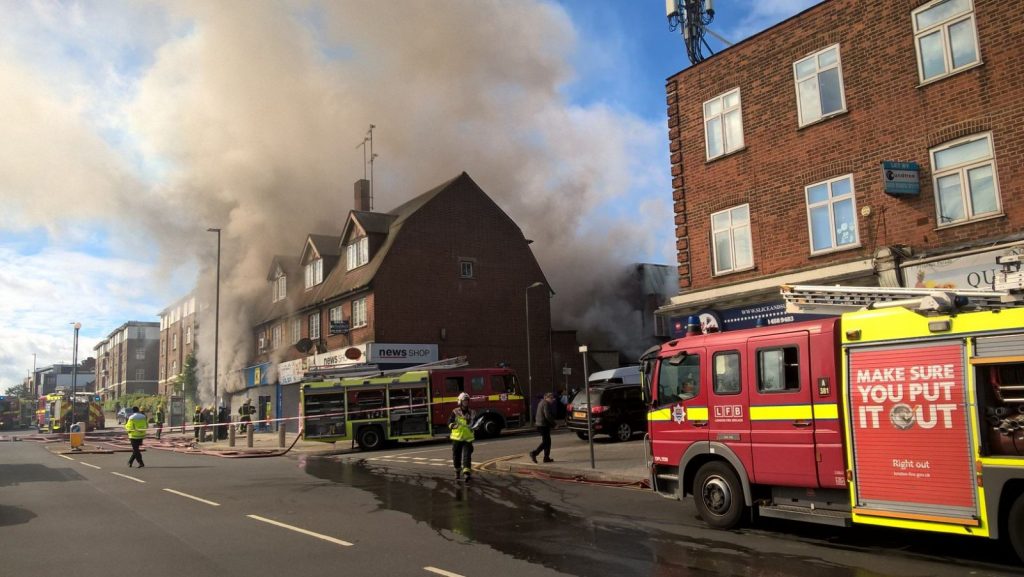 On Sunday morning, shortly after 7:30 a.m., a passerby noticed smoke billowing out from a popular kosher supermarket, Kay’s, on Golders Green Road, in North West London. Although the Fire Brigade arrived very quickly and began to work on the blaze, the fire was much bigger than it initially appeared, and soon spread to nearby apartments. The Fire Brigade called for reinforcements and at one point there were as many as 20 fire engines on the scene, together with ambulances from London Ambulance Service and Hatzola, as well as police and Shomrim volunteers.

Fire officers rescued a number of people from apartments in dramatic scenes, and although, baruch Hashem, no one was badly hurt, some 15 people were taken to the hospital, suffering from minor injuries or smoke inhalation.

Golders Green Road, the main artery for the area, was closed, together with side roads which lead to it, causing considerable disruption to traffic and diversions for a number of bus routes.

The fire continued to burn for around 12 hours, after which the Fire Brigade announced it was under control, but remained on site to damp down hot spots.

It appears that the building has suffered considerable structural damage. A spokesman for Barnet Council said Monday, “London Fire Brigade need to carry out an inspection of the site before they can determine what will happen to the building.” In the meantime, the roads remain closed.

Local Counciller Dean Cohen, chairman of Barnet Council Environment Committee, commended the outstanding work of the emergency services – London Fire Brigade, London Ambulance Service, the Met, Hatzola and Shomrim. He told Hamodia, “All of the emergency services worked together in a very difficult situation, to extinguish the fire and ensure the safety of the local residents.”