DUP Seeking Good Brexit Deal for N. Ireland in Talks With PM May 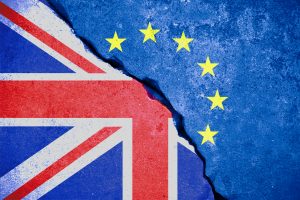 Leader of the Democratic Unionist Party (DUP) Arlene Foster will seek to strengthen the unity of the United Kingdom and get a good Brexit deal for Northern Ireland in talks with the Conservative Party, she said in a newspaper article on Monday.

British Prime Minister Theresa May’s Conservative Party needs the DUP’s 10 seats to be able to govern after it failed to secure an absolute majority in a parliamentary election on Thursday.

In an article in the Belfast Telegraph, Foster listed three priorities, including getting Northern Ireland’s devolved power-sharing government at Stormont working again.

Talks between the DUP and Irish nationalists Sinn Fein on forming a power-sharing government are due to restart in Belfast later on Monday.

“We stood on a clear policy platform of wanting to strengthen the Union, of working for a good deal for Northern Ireland as the United Kingdom leaves the EU, and of promising to do our best to get Stormont up and running again for the benefit of all,” Foster wrote.

“We will use the position we find ourselves in to do as we promised.”

Ms. Foster, who is due to meet PM May on Tuesday to finalize a deal, said the DUP would also be “mindful of our responsibility to help bring stability to the nation at this time of challenge.”

A source close to the DUP on Saturday said the party was seeking more funding for the province and concessions for former British soldiers as part of a deal, but would avoid social issues where they disagree with Conservative Party policies.