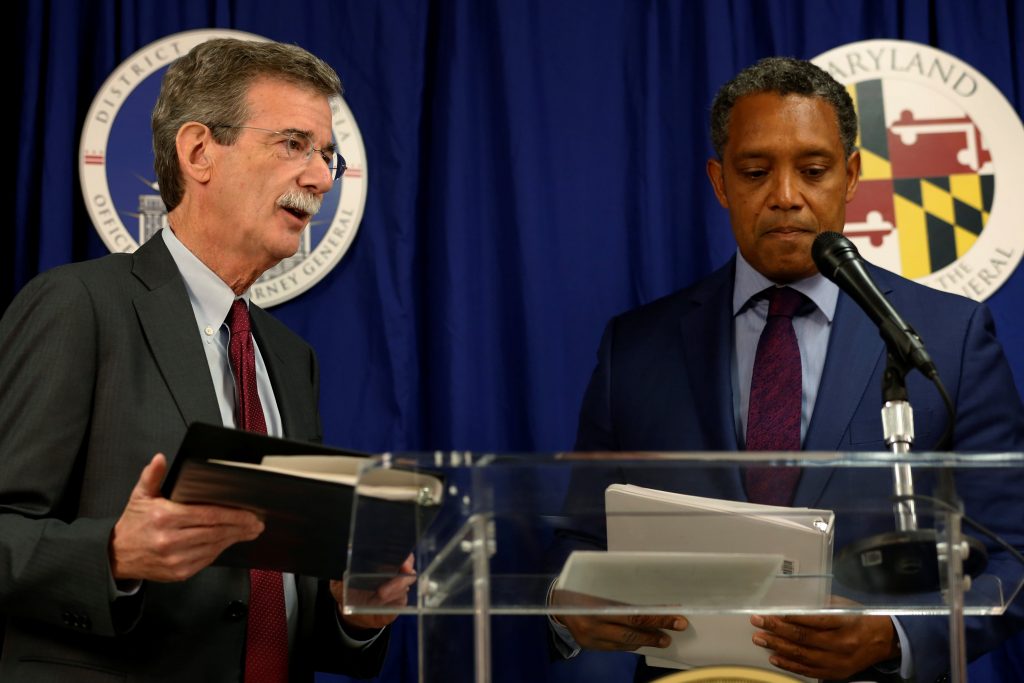 The attorneys general of Maryland and the District of Columbia filed a federal lawsuit Monday against President Donald Trump, alleging he violated the Constitution by improperly retaining ties to his sprawling global business empire and by accepting foreign payments while in office.

Maryland Attorney General Brian Frosh joined District counterpart Karl Racine at a news conference in the nation’s capital, saying the suit was filed in U.S. District Court in neighboring Maryland. Much of the case is focused on allegations that Mr. Trump’s real estate and business holdings violate a little-known emoluments clause of the Constitution. Those provisions bar the president and other government employees from accepting foreign gifts and payments without congressional approval.

“The president’s conflicts of interest threaten our democracy,” Frosh told journalists. “We cannot treat the president’s ongoing violations of the Constitution and his disregard of the rights of the American people as the new acceptable status quo.”

Frosh called the Trump empire a series of “business entanglements.” He added it was unprecedented the American people “must question day after day whether actions are being taken to benefit the United States or to benefit Donald Trump.”

The Trump Hotel in the nation’s capital affects business in the Washington area and is part of the reason the lawsuit was filed, the two democratic officials explained. They also said their action was non-partisan, and other state attorneys general, including Republicans, were welcome to join the suit. It seeks an injunction to stop what the two alleged are the president’s constitutional violations.

Frosh said at the news conference that Trump regularly welcomes foreign diplomats to his hotel and appears frequently at Trump establishments, “using his role as president to raise their public profile.” He added that the president continues to take money from foreign governments while in office.

The lawsuit also focuses on the fact that Trump chose to retain ownership of his company when he became president. Trump said he was shifting assets into a trust managed by his sons to eliminate potential conflicts of interests.

The White House did not immediately respond to requests for comment Monday. The president called an earlier, similar lawsuit about the emoluments issue “without merit, totally without merit.”

If a federal judge allows the case to proceed, Racine and Frosh say they will demand copies of Trump’s personal tax returns and other financial information in court to gauge the extent of his foreign business dealings.

Trump’s unique status as both president and the financial beneficiary of his global business empire raised questions about the little-known emoluments clause of the Constitution even before he took office. Trump and his attorneys argue the clause does not cover fair-value transactions, such as hotel room payments and real estate sales.

The attorneys general aren’t the first to sue Trump over emoluments. Just days after Trump’s inauguration in January, the government watchdog Citizens for Responsibility and Ethics in Washington filed a federal lawsuit in the Southern District of New York. Since then, a restaurant group and two individuals in the hotel industry have joined as plaintiffs.

The Justice Department said Friday that those plaintiffs did not suffer in any way and had no standing to sue, and that it is unconstitutional to sue the president in his official capacity.