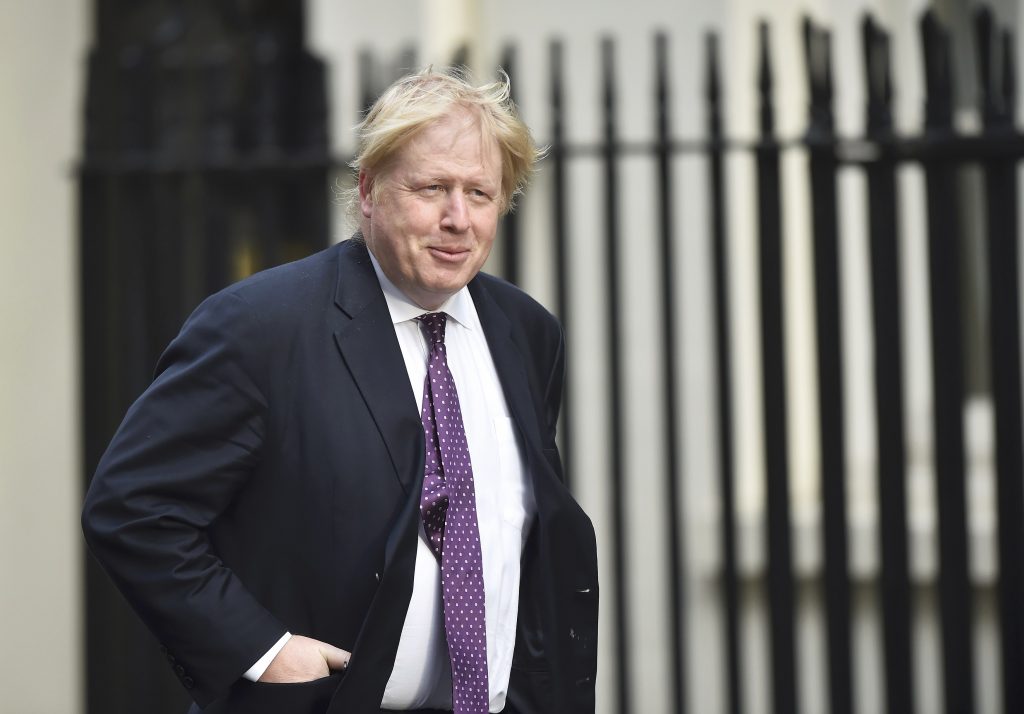 British Foreign Secretary Boris Johnson has denied plotting to topple Prime Minister Theresa May, who has been weakened by the Conservative Party’s disastrous election result.

But May’s hold on power remained tenuous Sunday as she tried to finalize a deal with a small Northern Irish party to prop up her minority government.

Former Treasury chief George Osborne — who was fired by May last year — called her a “dead woman walking,” and opposition leader Jeremy Corbyn said he was ready to contest another election at any time.

Johnson, one of the Conservatives’ most popular politicians, tweeted that an article in the Mail on Sunday newspaper headlined “Boris set to launch bid to be PM as May clings on” was “tripe.”

“I am backing Theresa May. Let’s get on with the job,” he said.

The Conservatives lost their parliamentary majority in Thursday’s election. May called the snap vote in a bid to strengthen her mandate ahead of exit talks with the European Union. Instead, she has left Britain’s government ranks in disarray, days before the divorce negotiations are due to start on June 19.

May’s party won 318 seats, 12 fewer than it had before the snap election, and eight short of the 326 needed for an outright majority. Labour surpassed expectations by winning 262.

Many senior Conservatives say May should stay, for now, to provide stability. But few believe she can hang on for more than a few months.

“I think her position is, in the long term, untenable,” Conservative lawmaker Anna Soubry told Sky News. “I just don’t see how she can continue in any long-term way.”

To stay in power, the Conservatives are seeking support from Northern Ireland’s Democratic Unionist Party. May’s office said Saturday principles of an agreement had been reached, but the two sides later clarified that they are still talking.

“We have made good progress but the discussions continue,” said DUP leader Arlene Foster.

Downing Street said it hopes to finalize the deal next week, after Parliament resumes sitting.

The two sides are looking to form a “confidence and supply” arrangement. That means the DUP would back the government on confidence motions and budget votes, but it’s not a coalition government or a broader pact.

The alliance makes some modernizing Conservatives uneasy. The DUP is a socially conservative group, and it had links to Protestant paramilitary groups during Ireland’s sectarian “Troubles.”

Conservative lawmaker Nicky Morgan told ITV that she could support a confidence and supply arrangement with the DUP, but any closer deal would be “a step too far.”

The government does not have long to ink a deal. It is due to present its platform for the next session in the Queen’s Speech at the State Opening of Parliament on June 19. The speech will be followed by several days of debate and a vote — and defeat would almost certainly topple the government.

“I don’t think Theresa May and this government have any credibility,” Corbyn said, predicting that there could be another election within months.

“I’m ready for another general election,” Corbyn said. “This is just the first step.”