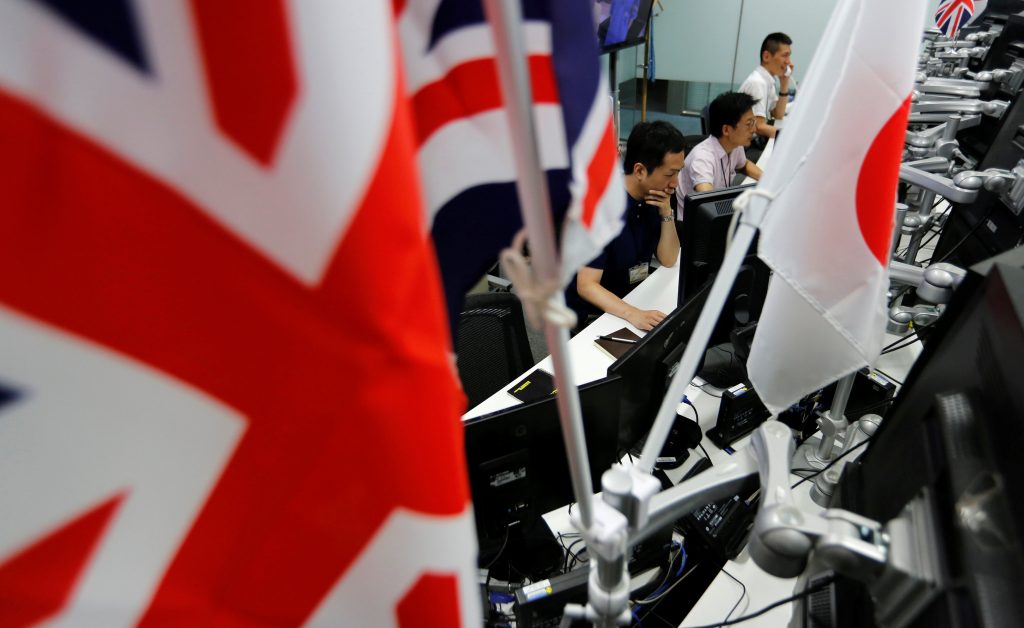 Sterling spiraled lower on Friday as British elections left no single party with a clear claim to power, sideswiping investors who had already weathered major risk events in the United States and Europe.

With the majority of seats counted in the snap vote, British Prime Minister Theresa May had no way to win an outright majority in Parliament.

The shock outcome saw the pound shed 2 percent on fears the political turmoil could delay and confound talks on leaving the European Union, which are due to start in fewer than two weeks.

Yields on 10-year gilts fell 3 basis points to 1.00 percent, but FTSE futures recouped early losses and turned 0.2 percent higher, perhaps on hopes that a weaker pound would help the economy.

The damage was limited elsewhere, with E-mini futures for the S&P 500 edging up 0.1 percent.

Japan’s Nikkei added 0.5 percent and MSCI’s broadest index of Asia-Pacific shares outside Japan were all but flat.

“This is messy for the U.K. economy and its Brexit negotiations and hence is a negative for the pound and share market,” said Shane Oliver, chief economist at AMP.

“But the U.K. is just 2.5 percent of world GDP and it’s hard to see significant implications for global investment markets.”

The rot started when an exit poll showed the ruling Conservatives could fail to win a clear majority when markets had expected a handy victory.

The BBC forecast the Conservatives would hold a reduced 318 seats in the 650-member parliament, following a big swing to the left-leaning opposition Labour Party.

Betting agencies were already taking wagers on whether May would still have her job by the end of the day.

“At this stage, there is no obvious way a formal, stable coalition government can be constructed, and therefore there is a high likelihood of a potentially prolonged period of uncertainty over who will be prime minister,” said John Wraith, a strategist at UBS.

Yet he cautioned bears against chasing the pound much lower from here.

“Today’s result will in part be seen as a vote against a definitive break from the EU, and the market may soon begin to reassess the probability of a so-called ‘hard Brexit.'”

There was much less drama elsewhere, as the Japanese yen gave up early gains and eased to 110.20 per dollar. The euro was little moved against the U.S. dollar at $1.1209.

The single currency had slipped overnight when the European Central Bank cut forecasts for inflation and said it had not discussed scaling back its massive bond-buying campaign, sending bond yields to multimonth lows.

Overnight, Wall Street had seemingly judged the testimony of former FBI director James Comey was not life-threatening to the administration of President Donald Trump.

Comey accused Trump of firing him to try to undermine the investigation into possible collusion by his campaign team with Russia’s alleged efforts to influence the 2016 election.

“I think the market is taking less of an alarmist review of this situation because there is no smoking gun here,” said Jefferies & Co. money market economist Thomas Simons.

“So it’s not particularly impactful for thinking about … Trump’s economic agenda to go through.”

Oil prices remained subdued with Brent having settled at its lowest since Nov. 29, the eve of an OPEC production cut deal.