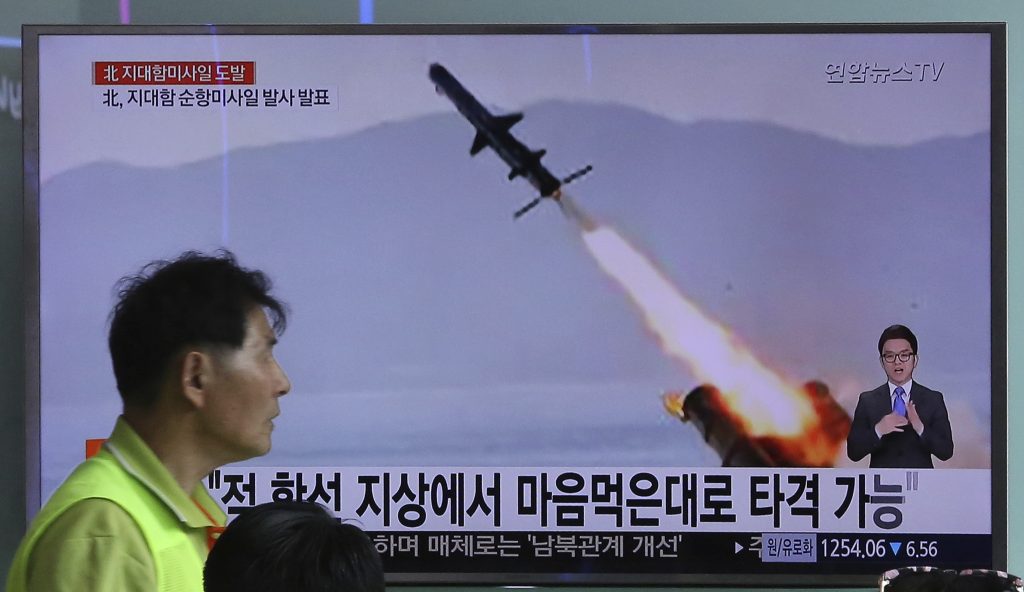 North Korea tested a new type of cruise missile that could strike U.S. and South Korean warships “at will” if the country was attacked, its state media said Friday, a day after Seoul detected four missiles being launched from an eastern coastal town.

The missiles represent the fourth new missile system North Korea said it has introduced and successfully tested this year, sending a defiant message that it will continue to pursue a weapons program that has rattled its neighbors and Washington.

“This new type cruise rocket is a powerful attack means, capable of striking any enemy group of battleships” attempting to attack North Korea and can be used “at will,” the North’s official Korean Central News Agency said.

The report said leader Kim Jong Un observed the launches and that the missiles “accurately detected and hit” floating targets at sea after making “circular flights.”

North Korea didn’t say how many antiship missiles it launched, but South Korea’s national security director Chung Eui-yong said Friday the North fired four short-range missiles. The South’s military said the projectiles were fired from the town of Wonsan and flew about 125 miles before splashing down between the Korean Peninsula and Japan.

The North’s missile tests present a difficult challenge to new South Korean President Moon Jae-in, who has expressed a desire to reach out to the North. North Korea, which could have a working nuclear-tipped intercontinental ballistic missile in the next several years, may also be the most urgent foreign policy concern for the Trump administration, which has been distracted by domestic political turmoil and has insisted China do more to rein in the North’s weapons activities.

North Korea’s weapons tests are meant to build a nuclear and missile program that can stand up to what it sees as U.S. and South Korean hostility, but they are also considered by outside analysts as ways to make its political demands clear to leaders in Washington and Seoul.

Moon said after the new launches that his government “won’t back off even a single step and make any compromise” on the issue of national security. He also warned that North Korea could only face further international isolation and more economic difficulties.

In what will likely become another source of animosity, Moon’s government said it will let two of the four North Korean fishermen recently rescued at sea resettle in the South in accordance with their wishes. The two other fishermen who want to return home were repatriated on Friday.

Pyongyang often accuses Seoul of kidnapping its citizens or enticing them to defect to the South.

The North in following weeks launched a solid-fuel mid-range missile that can be fired on shorter notice than liquid fuel missiles, and also what it descried as a new “precision-guided” missile, which experts say is designed with a maneuverable terminal stage meant to frustrate missile defense systems like the U.S. Terminal High Altitude Area Defense (THAAD) that is being deployed in South Korea.