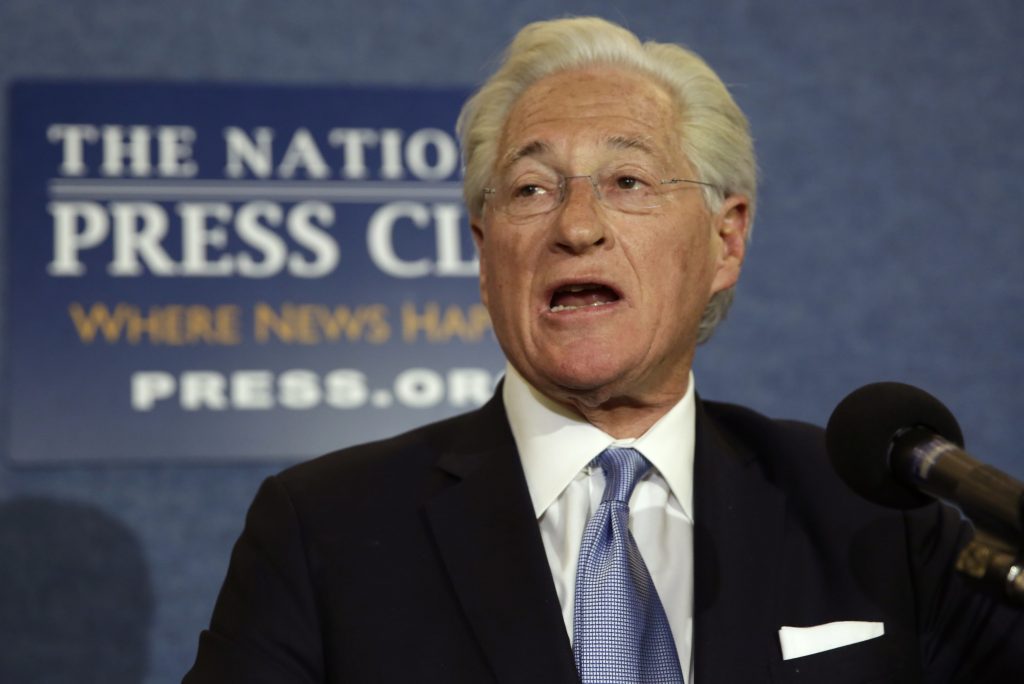 In a written statement provided by President Trump’s personal lawyer, Marc Kasowitz, which he also read to reporters at the National Press Club, he offered a defense of the President in the face of former FBI Director Comey’s congressional testimony on Thursday and sought to argue that it was Mr. Comey who had acted improperly:

Contrary to numerous false press accounts leading up to today’s hearing, Mr. Comey has now finally confirmed publicly what he repeatedly told the President privately: The President was not under investigation as part of any probe into Russian interference. He also admitted that there is no evidence that a single vote changed as a result of any Russian interference.

Mr. Comey’s testimony also makes clear that the President never sought to impede the investigation into attempted Russian interference in the 2016 election, and in fact, according to Mr. Comey, the President told Mr. Comey “it would be good to find out” in that investigation if there were “some ‘satellite’ associates of his who did something wrong.” And he did not exclude anyone from that statement.

Consistent with that statement, the President never, in form or substance, directed or suggested that Mr. Comey stop investigating anyone, including suggesting that that Mr. Comey “let Flynn go.” As he publicly stated the next day, he did say to Mr. Comey, “General Flynn is a good guy, he has been through a lot” and also “asked how General Flynn is doing.” Admiral Rogers testified that the President never “directed [him] to do anything . . . illegal, immoral, unethical or inappropriate” and never “pressured [him] to do so.” Director Coats said the same thing. The President likewise never pressured Mr. Comey.

The President also never told Mr. Comey, “I need loyalty, I expect loyalty” in form or substance. Of course, the Office of the President is entitled to expect loyalty from those who are serving in an administration, and, from before this President took office to this day, it is overwhelmingly clear that there have been and continue to be those in government who are actively attempting to undermine this administration with selective and illegal leaks of classified information and privileged communications. Mr. Comey has now admitted that he is one of these leakers.

Today, Mr. Comey admitted that he unilaterally and surreptitiously made unauthorized disclosures to the press of privileged communications with the President. The leaks of this privileged information began no later than March 2017 when friends of Mr. Comey have stated that he disclosed to them the conversations that he had with the President during their January 27, 2017 dinner and February 14, 2017 White House meeting. Today, Mr. Comey admitted that he leaked to friends of his purported memos of these privileged conversations, one of which he testified was classified. He also testified that immediately after he was terminated he authorized his friends to leak the contents of these memos to the press in order to “prompt the appointment of a special counsel.” Although Mr. Comey testified that he only leaked the memos in response to a tweet, the public record reveals that the New York Times was quoting from those memos the day before the referenced tweet, which belies Mr. Comey’s excuse for this unauthorized disclosure of privileged information and appears to entirely retaliatory. We will leave it to the appropriate authorities to determine whether these leaks should be investigated along with all those others being investigated.

In sum, it is now established that the President was not being investigated for colluding with or attempting to obstruct any investigation. As the Committee pointed out today, these important facts for the country to know are virtually the only facts that have not been leaked during the long course of these events.

As he said yesterday, the President feels completely vindicated, and is eager to continue moving forward with his agenda, with the business of this country, and with this public cloud removed. Thank You.